Art on the Fringes

has been talk both inside and outside the walls of Wizards about the perceived homogenization of Magic art. I cannot speak for the opinions of others, but I can let you know what my position is on the whole thing. In my humble opinion, it's not as bad as the rabble rousers would have you think, but it is not as good as it could be. I do absolutely believe that a no-holds barred approach would be a bad idea. It would prohibit us from digging deeply into any flavor concepts, like Ravnica's guilds, for example. But on the flip side, I think our Camel Clutch on the art can be loosened and still maintain the control that we need for worldbuilding.

I decided the other day to do a little educational trip through the halls of recent Magic art. I was not looking to see if the art showed a sameness that was tangible. This I already know to be true, because it is in some ways meant to be that way. I am not qualified to give you a primer on why a successful brand needs a cohesive and recognizable look, but I can tell you that I believe it to be true. Instead, my little trip down recent memory lane was to try and identify the edges of our art boundaries. I wanted to see what does qualify as Magic art (anything we currently print is considered fair game) but does not necessarily fall into the standard fantasy art category that some people think Magic has been limited to. I have to say I was very happy with what I found. This is when I decided to show some of my findings to the TTM faithful.

( I am loading all the words here at the beginning to give your computers time to load up all the images. After a bit more banter I am going to shut up and let the pictures take over.) 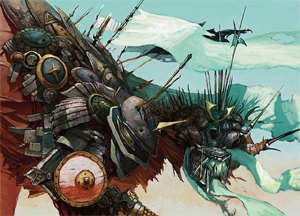 The thing we need to take away from the art we are going to see is that the varied styles, tones, and levels of realism/abstraction are all fair game. The folks who choose to paint their Magic art in a more classical fantasy style are not doing it because they have to, it is because they choose to. As long as you can pull off a divergent style with the quality that is expected of a Magic artist, more power to ya'. Check out the image to the left- it's one of my all-time favorite Magic illustrations. Is this “standard” fantasy art? Absolutely not. And yet here it is, in all its complex, textured, abstracted glory. Check out how it's mostly green or neutral, except for the hints of red within the armored mass – it's like the elemental swirls with the anticipation of spilt blood. Anyhoo, I am getting off on a tangent (as I tend to do when I am appreciating great art.) The point is, this weirdness is acceptable Magic art.

Equally acceptable is something on the opposite end of the spectrum. While War Elemental is suggestive and complex, Gifts Ungiven is elegant, simple, and graphic. 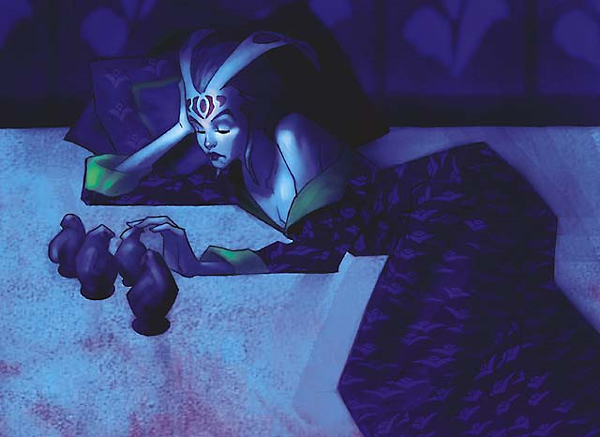 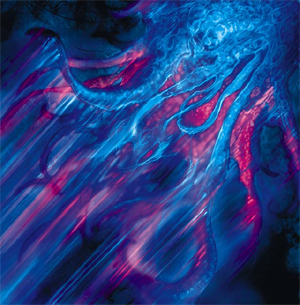 From this point on we're just going to hop from one picture to the next. I may pop in to point out something, or I may let the art speak for itself. In this case, I'll chime in to say that Temporal Cascade is mysteriously cool. If you're looking for some Magic art to stick out like a sore thumb like the ancient days, it's not going to happen. But you can definitely find some gems like this that are absolutely nothing like the sword and sorcery imagery that is the meat and potatoes of Magic. Come on, how is this color-rich trip to the unknown not “different” enough? 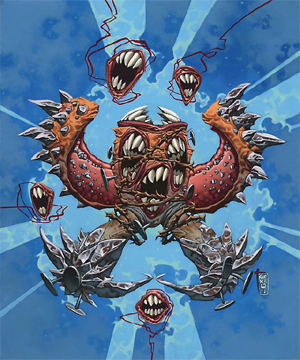 Now there's a big leap. From obscure and ethereal to hyper-focused, balls-to-the-wall insanity. Each very different, but neither fits the classic fantasy mold. I have often wondered whether people really wanted to see the simplistic, often unsophisticated art of Magic's past, or if they just want to give their eyes and minds a rest. Early on, there were more illustrations that were digestible in one quick bite. Cartoons and symbols and single figure, ungrounded compositions are not any better than fully-rendered fantasy, but they do give you a place to rest and not be optically challenged. In the vast sea of imagery that is Magic: The Gathering, perhaps it is the variance in complexity that is truly needed and not necessarily variance in style.

Gifts Ungiven is a good example of contemporary Magic art (contemporary meaning in the last three years) that is a pillow for the ol' peepers. So are Talisman of Dominance and Spiraling Embers. Each of these fits our current standards and is a brief respite from fantasy in edge-to edge detail.

So you don't want a rest, but you don't want barbarians in full range of value and realistic lighting and color? How about a couple examples of art that are about pattern, texture, and mood, not vascular biceps, dented grieves, and bloodstained blades. 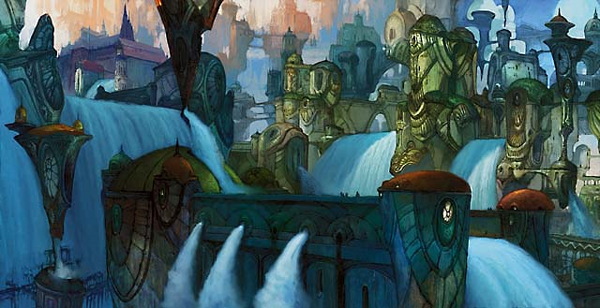 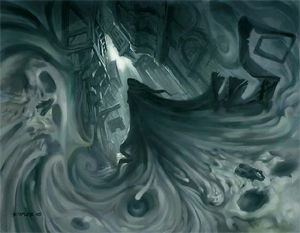 This is a good example of something that has been the topic of conversation in the Creative Team for the past month or so. We're thinking about pushing spell and enchantment cards away from “scenes” and snapshots of spells being cast and more toward the symbolic or abstracted imagery like we see in Shadow of Doubt or Temporal Cascade or even Spiraling Embers. This will give the overall collection of art a more diverse feel and it will also help differentiate spell cards from creature cards. 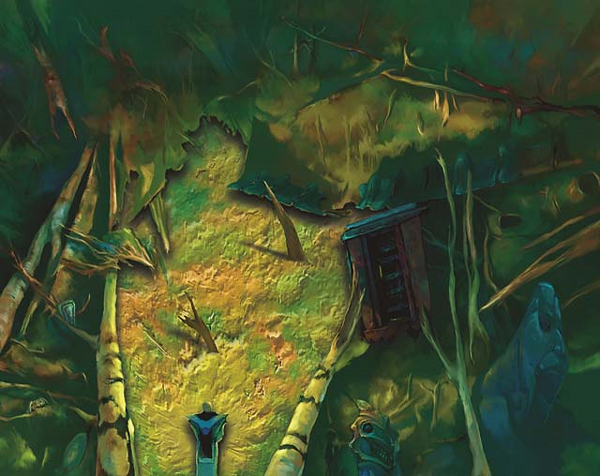 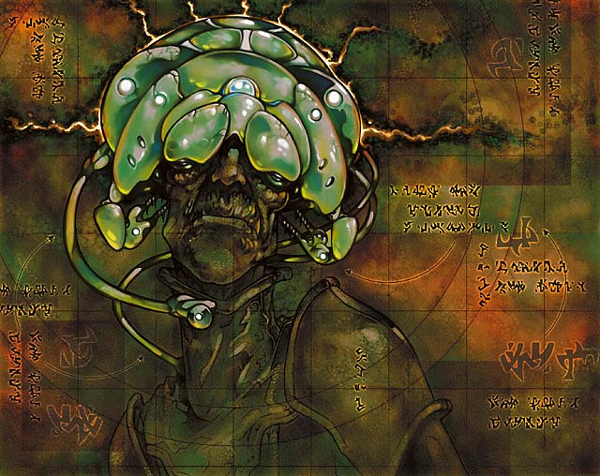 Wall of Mulch and Mindslaver stood out to me because they are not about showing me the wall and the… whatever-it-is, they are about the feeling of the wall and the whatever-it-is. Here, texture is more important than making sure we can see how the wall looks under the lighting conditions of the noon-day jungle. This is cool, artsy, and acceptable. When an artist wants to get fartsy, we do not stop them. I am starting to think that many of the artists we work with may be victims of fandom. Many Magic artists are huge fans of other Magic artists. They tend to see what's in there and what works. Then they take that stuff for a spin. 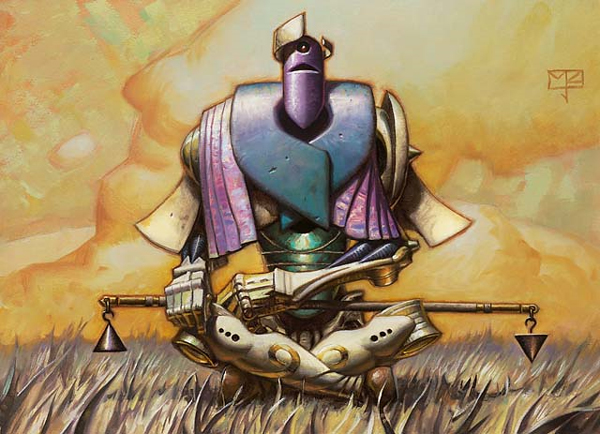 I know for a fact that a whole barrelful of Magic artists look to Mark Zug's work for the signs of impeccable technique, wonderful color, and amazing dexterity. I would hope that they would look to Silent Arbiter as an example of Zug wielding all that skill, but in the name of whimsical simplicity. Sometimes tone is all that needs to be different for art to read as something different. Pain Kami (up near the top of the page) is another example of this. Spiky octopus-mouth is a hoot. It's got all the character and attitude of a cartoon, but without the flat, unsophisticated delivery. 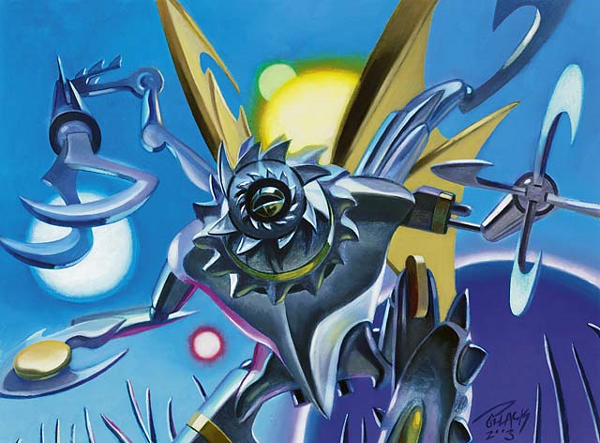 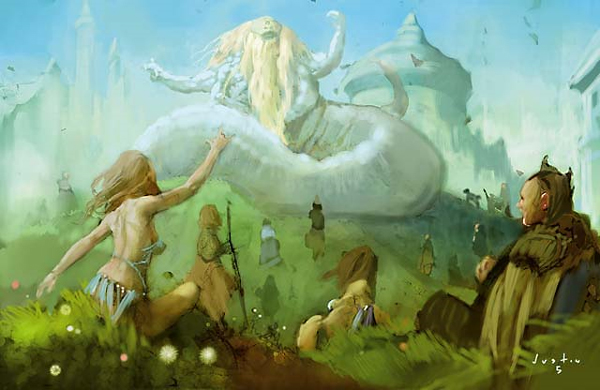 Well there's a light, fresh image. Primordial Sage just makes me happy. This may not seem to fit the bad-ass fantasy style that is called for in the style guide, but as I stated in the TTM style Guide articles, it's a GUIDE, not a slavedriver. Sure, we ask for aggressive, full-bore art so it is the overall impression Magic gives. But we never rule out other styles when they are appropriate.

Art is all about opinion. Wizards has to decide what Magic art should be like based on the opinions of certain key folks. It is quite possible that what they decide does not exactly mesh with your own opinions. What I have found in my little art hunt is that this mater of differing art styles is not one of we used to have it and now we don't. I think these examples, when stacked up against other Magic art, show that there is a healthy amount of variance within accepted Magic styles. Your opinion may lead you to say that there is not enough variance, but I think you'd be putting a “Dingbat” sign around your neck if you continued to argue that all Magic art is the same.

In this artist and Magic fan's opinion, the range of differing styles that I see is just about enough to satisfy me. It seems to me the envelope could bulge a bit more without causing any damage. Even without any envelope pushing, I think we're in a good place. Our boundaries are wider than it may seem. All we really need to do is give some more love to the sorts of art that live near the edges. (Easier said than done- it'll be a cold day in Hades when I stop gawking at the classic fantasy mastery of Zug, Jim Murray, Donato, Brom, or Kev Walker.)

I'll be bringing you more magic art goodness in the near future with some spotlight interviews with some Magic paint slingers. If you have any questions that you would like me to pose to our favorite pigment pushers, just email 'em to me .