The Artists of Magic: Winona Nelson

Winona Nelson's art has been with Magic for over six years now, and on behalf of the community at large, I can say we're very grateful for that. She has demonstrated wonderful range over the years, bringing us cards that depict fantastical beasts, mystical spells, proud warriors, and even the simple beauty of everyday life. Winona's creations have truly deepened the worlds of Magic and have enchanted many of the game's players with their distinct allure.

At the same time, Winona is making her own dreams come true. As a lifelong lover of fantasy art and many of the subjects she gets to depict, she is crafting the kind of art she has admired her entire life. I was very pleased to chat with Winona about the pieces she creates for Magic: The Gathering. 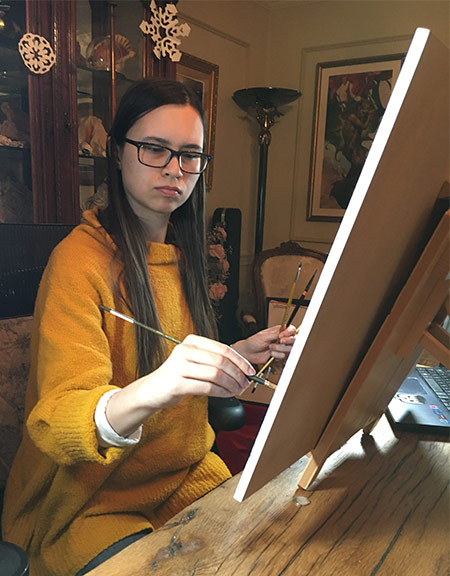 Nicholas Wolfram (NW): To start things off, why do you like creating art for Magic? What drew you to become an artist for the game?

Winona Nelson (WN): I have always loved realistic fantasy art, and my older brother started collecting Magic cards when I was a teenager. The art blew me away! I had wanted to make art for Magic ever since then, but it took ten years of learning and improving before my work was good enough. The thing I love best about painting for Magic is the emphasis on a wide variety of diverse characters. As a person of color myself, I always wanted to create work that increased the diversity visible in the field of fantasy.

NW: After you get the art callout for a new card, what does your creation process look like? How long does the process typically take you per card?

WN: First, I do some tiny sketches and thumbnails. They're usually very simple scribbles, but they help me think of poses and overall composition. That usually takes a half hour to an hour. Then I photograph the best thumbnail and paint on top of it digitally, trying out different value arrangements, collecting references, and making the sketch detailed enough to communicate my idea to the art director, which usually takes about an hour. My sketches are still pretty loose when I turn them in. Finally, I gather more references, experiment with color schemes, start rendering, gather more references, and continue painting until it is finished. Each card takes three to five days in the painting stage, depending on the complexity.

NW: Does your process or approach to art differ depending on the color identity or card type of the card?

WN: Yes, absolutely. I usually choose a color scheme that features the color of the card, either as an overall tone or as an accent color. The mood callout affects these choices a lot as well, and I make my compositions and shape motif based on that. For instance, if the mood is uplifting, I use shapes that feel floaty, with a general upward movement. Sometimes I choose music to listen to based on these factors, to further immerse myself in the feeling needed.

NW: Starting with Enthralling Victor and now reinforced by Captivating Crew, it seems you have become the go-to artist when it comes to irresistibly charismatic dreamboats. Was this a career goal of yours, or was it something you just fell into naturally?

WN: This was a career goal! Many artists will tell you that a big reason they create art is to capture beauty. And as someone attracted to men, I found depictions of beautiful men in fantasy art to be too few and far between. To be honest, the abundance of sexy women and lack of correspondingly comely men made me feel like I wasn't included as an audience. Lo and behold, when I got my first Magic assignment, it was because they needed someone to paint a "shirtless male Vampire" . . . for Rakish Heir, and I had the right portfolio for the job.

NW: I can say with confidence that you have greatly improved Magic's library of comely men. However, while your most well-known Magic pieces tend to focus on powerful humanoids, I often find myself enraptured by your work with beasts and other animals. What creatures of this nature have been your favorite to draw, and what creature types in Magic would you love to be commissioned for?

WN: I love painting animals, and I'm glad you noticed them! My favorites are ones a little bit more based on real-world wildlife, but I like all kinds. I love to paint anything equine, feline, or canine in particular. I would love to be commissioned for an epic winged tiger beast or flying unicorn, or more mounted characters!

NW: I'm going to be straight with you—Imayhave been aware of your love for flying unicorns. And really, I'm a fan of anything that features unicorns goring demons and high-horning each other in celebration, so thank you for bringing this into the world. That said, how psyched were you when the order for Concordia Pegasus rolled into your inbox?

WN: I may have screamed when I read that one. I painted it traditionally and huge at 20 by 30 inches because I was so excited about it. I've collected a huge folder of horse reference pictures, many of horses rolling on the ground so I can flip them over and have leg references that aren't standing or running on the ground, and have been adding to it for years so I can easily pull those up when I do another Pegasus painting. In addition to my little comic, I've done a few Pegacorn paintings just for fun.

NW: What is your favorite Magic card that happens to feature your art?

WN: This is a rather difficult question for me to answer, because I haven't played Magic since the '90s. I've been a big fan of the art but don't play the game anymore, so I'm not as familiar with the mechanics. That said, I think I'd have loved Enthralling Victor due to the bare-chested glorious man, or Arlinn Kord because a Werewolf Planeswalker seems super badass, and I like that she's an older woman.

NW: You're certainly not alone there; I know of at least one coworker here in the office who treasures her Enthralling Victor print. What piece you created for a recent set are you most proud of?

WN: I rather like how Anointed Deacon turned out. The description made the character sound kind of prissy, holding his sleeve out of the way of the blood of the Dinosaur he's killing, and when [I was] describing what I needed to the model (my boyfriend and fellow Magic artist Anthony Palumbo), he stuck his pinky up in the perfect, dainty way. 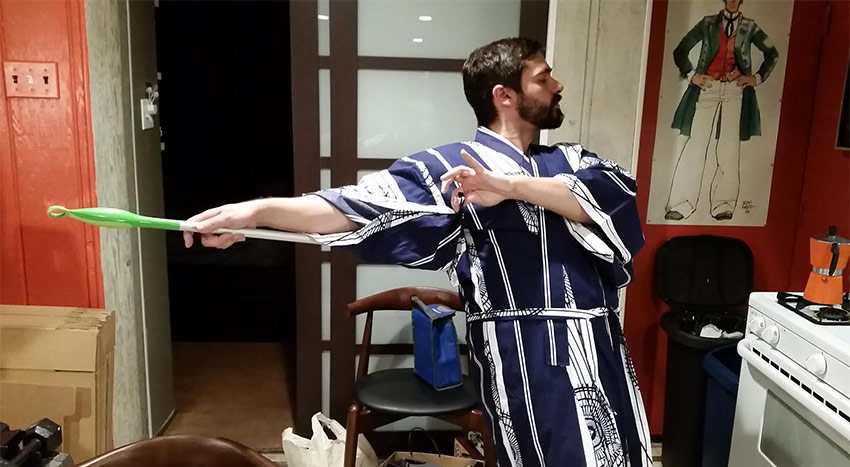 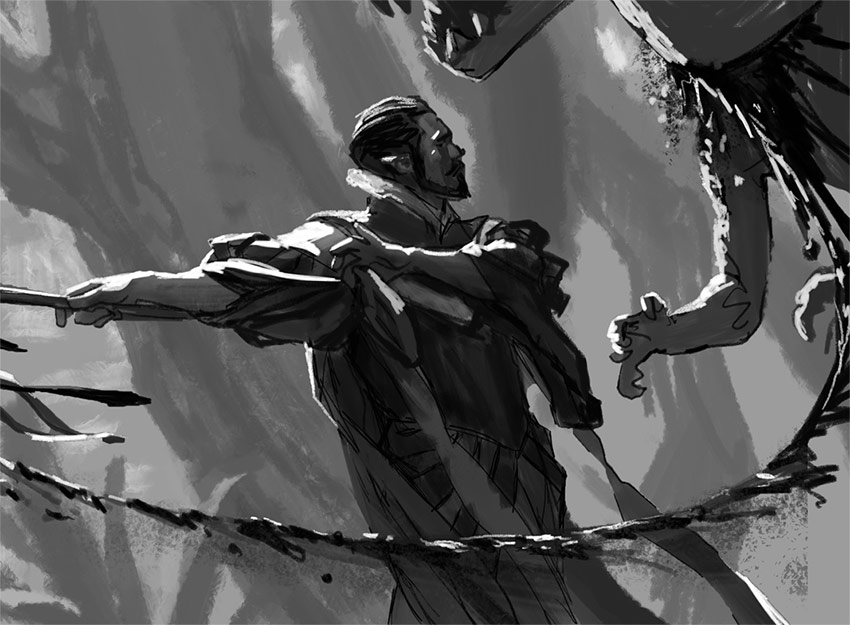 I got really into painting the jungle trees in this setting. And of course, I'll never get my fill of painting Vampires!

NW: While your Vampires seem to be faring just fine (so far), some of the characters you've worked on have gone on to endure some terrible fates upon returning to the game, most notably Bruna. Are you ever dismayed when a character you helped define for players goes through such turmoil, or do you find you're more emotionally removed from their circumstances?

WN: I was a little upset about what happened to Bruna—and to Avacyn, having painted her for Avacyn, Guardian Angel. I get a little protective of characters I've painted, but then again, I know it's up to Wizards to write what happens to them. If it were my choice they might all join a competitive breakdancing group and go win a tournament instead, and that wouldn't really fit into Magic.

NW: Do you have anything else you'd like to say to the Magic community?

WN: I would like to say thank you all for enjoying my work, and for occasionally meme-ing it! I love meeting the players at Grand Prix (GPs), and have found everyone incredibly supportive and welcoming. Last year my binder of artist proofs was stolen, and the community really came together to try to help me recoup the loss. I was amazed at how fast the news spread and how many people wanted to send me messages showing that this community finds such an act abhorrent and inexcusable. There were some strangers who seemed more upset about the theft than I was, because they were worried that a bad experience like that might make artists reluctant to appear at GPs. After that I really felt like the vast majority of Magic players are good people who pride themselves in upholding the values and reputation of the community, working to improve the experience for everyone. That's beautiful.

Thank you, Winona, for taking the time to talk with me. And, of course, for bringing life to some of the hunkiest dudes Magic will ever see.