The Kamigawa block constructed Pro Tour is one week behind us, and next weekend is the Saviors of Kamigawa prerelease. If PT Philadelphia was any indication, the rest of Kamigawa will be populated with a wild array of colorful characters and giant monsters. What new twists does the conclusion of the Kami / Human war bring? Look no further than today's preview for just one such twist. May I present, Sasaya, Orochi Ascendant: 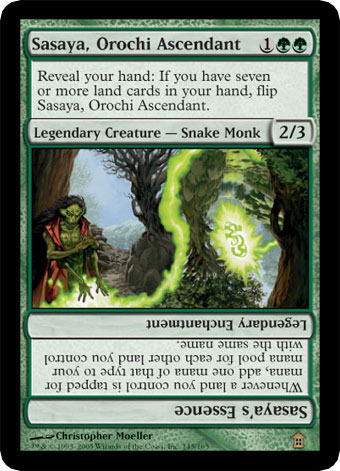 Also notice that revealing your hand is a cost. Revealing things usually waits until resolution, but costs are done on announcement. So what's to stop you from revealing seven lands and then Brainstorming to put some back before the ability flips Sasaya? Revealing cards as a cost means the cards stayed revealed until the effect resolves or leaves the stack-- this is a new update to how "reveal" works (specifically for costs). If you remember ninjutsu, this is the same idea (the Ninja is revealed and stays that way until it hops into play), except now the idea can apply in other areas. So if you activate Sasaya, and the contents of your hand change while the ability is on the stack, your opponents will be able to see what's in your hand. Once the ability resolves or leaves the stack (Time Stop, Squelch), your hand will stop being revealed. If you do something that requires looking at cards in your library such as Sensei's Divining Top, those cards won't be revealed because they're not actually in your hand. What's to stop you from using the ability repeatedly just to waste time? The ill will of your friends and the ire of judges who will be forced to penalize a player for being unsporting (wasting time is not sporting).

So we've got the first form out of the way, what about that second part? Yes, that is a mana flare gone wild. If you control five Forests and tap one for mana with Sasaya's Essence, you'll get

from the Forest, and Essence ability will give you

. That's 25 green mana from five Forests. And we're not talking about just basic lands-- you tap one of your four Urza's Towers, you'll get

from the Tower based on whether you also have both Urza's Mine and Urza's Power Plant, but you'll also get

for the other Towers-- so

from the land and

more from the Essence-- potentially

from the one tap. Of course, this only counts lands in play. Knowing you have four of something in the deck doesn't mean you get a bonus; the lands must be in play for the Essence to kick in.

at the same time. You can choose either

for each of the other Valleys you control-- mix and match is fine. But if it's a land like Brushland, that makes only one color at a time-- you only get more of the color you just made without the option of the other colors (or colorless) the land could make.

Back to the Present

That's all for this week. Next week I'll be digging into questions about the preview cards here on magicthegathering.com as well as covering regular reader submissions. Be sure to check it out as soon as possible so you have time to make it to your local prerelease events. Best of luck, and have fun!