The Attack of Captain Obvious

secret's out, I suppose. I'm a supervillain.

I thought I was careful. I cultivated an alter ego. I never attempted heinously convoluted world-domination schemes without my costume. I avoided overtly taunting superheroes like some of my more reckless brethren. But it all started to fall apart.

My first clue was when unsolicited junk mail for Supervillain Monthly magazine and First Bank of Evil credit cards started showing up. Even the normal junk mail was addressed to “Resident Megalomaniac.” Resumes from college kids looking to be henchman somehow found themselves slipped under my door along with the Chinese restaurant menus. And then, to make matters worse, my secret lair inside a hollowed-out volcano started spewing steam and ash this week. You do a little tinkering on your earthquake machine and all of a sudden your house is on the national news and there are some major roof and plumbing problems. I've had to clear out, and my sister-in-law's couch is not an ideal setup for supervillainy. Her dungeon can barely hold two superheroes and a sidekick side-by-side. The real problem is that I think I left the oven on inside Mt. St. Helens, but I can't go back now with all the TV cameras staked out there. I'm not sure how things are going to shake out, but I bet before it's all over, my carpet cleaning bills are going to cost me a fortune.

I combat your typical range of buttinsky do-gooders. I typically get one or two a week, no more than the national average according to the trade publications. I've actually got one tied up in the backyard right now. I had to write this week's column, so I left him unsupervised in my latest fiendish, painfully slow torture & execution contraption. It's so complex to get out of, I'm sure I won't have to check in on him for a couple of hours. How can he possibly untie the ropes and loosen the chains and wriggle out of the straitjacket and open the safe from the inside and swim to the edge of the tank before the time bomb-rigged spikes come crashing down? Maybe your top-flight superheroes—you know, the ones that get movies made about them—could do it, but some scrub like Houdini's Ghost? I highly doubt it. My other regulars include The Righteous Brothers (if they sing “Unchained Melody” at me one more time, I can't be held responsible for my actions), King Nautilus, Hypnotix (he was one of us before he went good—what a waste), and the worst one of all: Captain Obvious.

My battles against Captain Obvious are neverending. That jerk wants everything to be as nonconvoluted as possible. Doesn't he know that violates the supervillain code? I could get kicked out of the League of Evil for that! One of his recent projects was a Champions of Kamigawa Snake deck. His way is to toss Sashi, Sosuke, and Seshiro together, along with a bunch of other sibilant slitherers, and be done with it. My way is to start with the “unplayable” Snake—Shisato, Whispering Hunter—and break it. Add in a Whispersilk Cloak so that it can't be targeted or blocked and you've just Stasisified your opponent. (Doesn't Stasis sound like it belongs in here?) Orochi Eggwatcher and Orochi Hatchery can pump out Snake tokens for it to (rather cannibalistically) eat, and you can keep Shisato's energy up all day. Captain Obvious and I were locked in a death-defying battle on a tightrope strung between two hot-air balloons (long story), but then the episode ended with that cliffhanger and, what with presidential debates and baseball playoffs, the conclusion hasn't aired yet. I don't know who wins, so I'll have to compromise.

I still like playing with Shisato, but it's not the focus of this deck anymore. (Whispersilk Cloak, although it paired oh-so-thematically with the Whispering Hunter, was largely useless otherwise, so I cut it.) The new fun thing is to see how big you can get your Snake tokens. They get +1/+0 from Sosuke, +0/+1 from Sachi, +2/+2 from Seshiro, +2/+2 from Konda's Banner, and +who knows how much/+that same amount again from Coat of Arms. The Blasting Station-Beacon of Creation trick works just as well with Orochi Hatchery, so here it is again.

Why'd It Have to Be Snakes?

Hmmm, that was reasonably obvious, wasn't it? Some fun things within the deck: Sachi turns a number of your Snakes into

producers to help power out a giant Hatchery. The Hatchery can help your Eggwatcher flip. And Shisato turns your Decoys into mini-assassins as they have extra power, a Basilisk ability, and a moderate form of Lure. It's better creature removal than green normally gets! 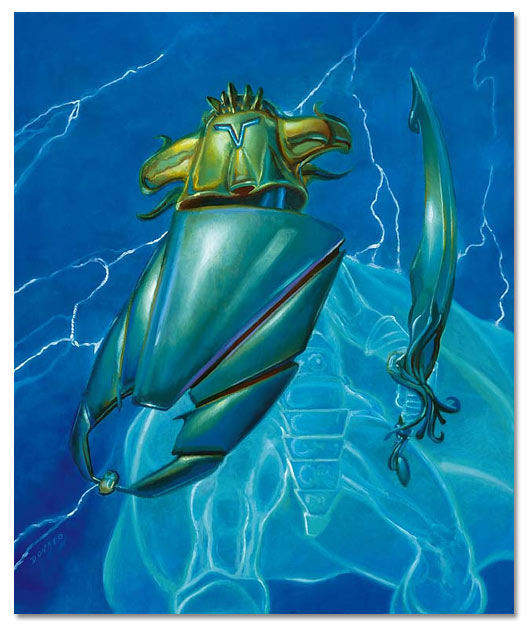 The problem with these superhero-supervillain showdowns is that the superhero always seems to win. Have you noticed that? Who's rigging these things? I can't possibly be doomed to obviosity. I won't stand for it! And why do we always talk in slow motion whenever the adversary takes the edge in a fight? That's the stupidest—ack… caught… within… grip… of… Duh… Ray… can't… resist…

So, let's make the Kaldra deck, shall we? This has been one of my most frequently requested subjects since Fifth Dawn was released. And sure, while the combo of putting the three legendary Equipment together is spelled out pretty plainly in the card file, it's what you do with it afterwards that sets it apart.

Josh C. sees Kaldra as an infinite mana generator. Pay 1 mana to make a Kaldra token. Sacrifice it to Ashnod's Altar to get 2 mana. Pay 1 mana to make a Kaldra token. Repeat. Stephen Coleman and Fox Murdoch (a superspy name if I ever heard one) figure that as long as you're searching up equipment, and as long as your Kaldra combo is indestructible, you might as well fetch a Worldslayer too. Matt Weir likes the idea of repeatedly creating legendary Kaldra tokens (which legendarily off each other) while you have a Grave Pact in play. (Before I get the standard 15 emails that I always receive when I write about this topic, yes, token creatures do go to the graveyard before they cease to exist.) Other (now obsolete) ideas involved doing crazy creature type-changing effects so that, for example, Helm of Kaldra produced zillions of 4/4 Avatar Cats instead of Avatar Legends so they wouldn't be subject to the legend rule. These types of ideas don't work anymore because now the Helm produces legendary Avatar creature tokens and it's impossible to make the tokens be non-legendary. Ah, crushing people's dreams: It's one of the things that attracted me to supervillainy in the first place.

What am I going to do with my Kaldra tokens? Nothing too exciting. Remember, I'm in the clutches of Captain Obvious. My main plan (just in case a 9/9 indestructible, first striking, trampling, hasty creature isn't good enough) is Blasting Station. For each

Dang. Captain Obvious, in a move I really should have seen coming, trapped me in his Think-Inside-the-Box Box. I have a sudden urge to make a Samurai deck. Oh, it's so easy. Three colors to choose from, with a varied selection of costs, speeds, rarities, and support cards. So straightforward. So tempting…

When I finished my first attempt at this deck, I stepped back, I looked at it… and I realized I had still built an all-Samurai deck. Since bushido is cumulative, and Takeno and Nagao, Bound by Honor (the poor guy: someone TP'ed him, and he's too bound by honor to even acknowledge it) are happiest if you start out with Samurai in the first place, that's the natural place for the deck to go. But in order to break free of the non-diabolical clutches of Captain Obvious, I punched a hole in his box to add three creatures to the deck that aren't Samurai until after Golden-Tail gets his paws on them: Taunting Elf, Deftblade Elite, and Krosan Vorine. Lure and provoke can be good when your creatures get gigantic in combat. Toss Oathkeeper, Takeno's Daisho to one of these Samuraiified critters and you have a reusable heat-seeking missile.

Don't worry—Captain Obvious gets his victories here and there, but I've always managed to escape before so I could start wreaking havoc again. I have this idea I've been tossing around for a way to destabilize the earth's core and buckle the entire surface of the planet. If things go according to plan, at least one entire tectonic plate will fly off into space. Wish me luck, and give me a heads up if you see any superheroes!

Until next week, enjoy supervillainy.
Mark

Mark can be reached by clicking here. Although he can't provide personalized deck help, he's always interested in seeing the goofy, original combos and decks you've come up with. (Be sure to include your name in case your idea makes it into a future column.)