hope you enjoyed last week's April Fool's installment of Week In Review, because I sure enjoyed writing it. About two weeks prior to its publication, my editor Scott Johns called to let me know that magicthegathering.com would be doing an April Fool's special on April 1st – which is Thursday, so it was perfect for my column.

“I do not want a shred of truth in your column this week,” said Scott. I was very happy to oblige. As you can imagine, there are plenty of fun pranks one can pursue with a column like Week In Review. The final version you saw was contributed to by Scott Johns, Monty Ashley and Mark Rosewater, in addition to my own writing.

Perhaps the coolest joke last week was that the lead article by Mark Rosewater (the announcement of “Unhinged”) was real. Many of you remember Unglued – the non-tournament legal fun expansion set that came out years ago. Unhinged is something along those same lines. Cards printed in Unhinged are never meant to be played in a tournament setting, so designers are free to experiments with ideas and concepts that would simply be too problematic for a real set. 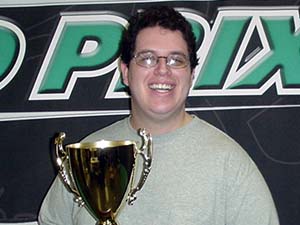 Mike Turian, GP Columbus ChampionSince we were “otherwise occupied” last week, this week we will talk about a pair of Grand Prix tournaments that took place at the end of March. Both events were Limited format, utilizing the Mirrodin-Darksteel sealed deck format on day one and Booster Draft for day 2.

Grand Prix Columbus set a record for the highest attendance at a North American Grand Prix. 854 players were in attendance, which allowed the organizers to cut to 128 players on day 2 instead of the usual 64. Many of the usual suspects turned out, so day 2 was a chock full of talent. Of them, it was team CMU/TOGIT that dominated the tournament.

Kate Stavola entered the tournament with no byes after her short stint as an employee at Wizards of the Coast. She entered day 2 with an 8-1 record and then ended up entering top 8 as first seed after an excellent performance in the draft portion. She was joined in the top 8 by teammates Craig Krempels and Mike Turian. It was Turian – widely accepted to be the best player in this top 8 – who dominated the competition and won the tournament. His draft deck featured some really broken cards – Grab the Reins, Skullclamp and Sword of Kaldra were all part of his Red-White deck list.

In the finals, Mike defeated his teammate Craig Krempels, who drafted a black-green deck featuring Terror, Promise of Power, and One Dozen Eyes among others. Turian swept all three of his opponents on his way to victory. 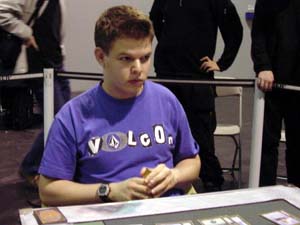 Stefan Jedlicka, winning the final match at GP BirminghamMeanwhile, European players battled it out for a title of their own at Grand Prix Birmingham, England. With an attendance of 578 players, this was also a very sizable event as traditionally British Grand Prix are somewhat smaller than those held on the European mainland.

When the dust settled, it seemed the Ruel brothers had some new competition. Not since the O'Mahoney-Schwartz brothers has another pair of siblings come close to Ruel's success. It looks as though there may be another pair of brothers whose career is on the rise however. Niki and Stefan Jedlicka from Austria both made top 8 at Birmingham. Unfortunately the brothers were forced to face each other in the first single elimination round. Older brother Stefan won and proceeded to win the tournament. This is his second Grand Prix win, as he was also the champion of GP Prague.

Stefan Jedlicka drafted a green-blue deck, splashing red for a Barbed Lightning. Several Myrs allowed him to summon large green creatures quickly. He also possessed some bombs, like Mindslaver and Crystal Shards. In the finals, Jedlicka defeated Germany's Rene Kraft, who drafted a solid black-red deck with Spikeshot Goblin. Although his deck was somewhat low on removal given his color combination, it contained a solid enough creature mix to help him advance to the finals.

North American Challenge qualifiers have begun as of April 1. The schedule of events has been posted on the TJ Collectables web site. Those of you interested in playing should check it at www.tjcollect.com.

I am currently working on an article that deals with some of the best plays of all time. These are memorable plays that took place at Pro Tours, World Championships, Nationals or Grand Prix. For this, I need your help. What do you think were the top tournament plays of all time? If you have some ideas, please drop me an e-mail at ashv at kingsgames dot com. Thanks in advance for everyone's help!

Phelddagrif, a card from Alliances is an anagram for “Garfield, PhD”

What artifact's casting cost was originally printed as

“This game happened in the finals of an online MMD draft. I was playing a BR deck with a moderate amount of good removal and some decent creatures. He was playing a mostly green deck with a fair amount of artifact removal. I got some early damage in dropping his life total to 12, but then he stabilized with a few pro-artifact creatures holding off my Pewter Golems and the like. It wasn't looking too good for me: although I was at 17 life, he proceeded to play a Roaring Slagwurm (not promising when most of my creatures were artifacts) followed up by a Crystal Shard and an entwined One Dozen Eyes.

He was tapped out except for 1 land from playing the One Dozen Eyes and suddenly I realized I could win. At the end of his turn, I made a ton of mana (I had lots of land, a talisman, plus a Krark-Clan Stoker) and dealt as much damage as possible to myself through mana burn and the talisman. With my new near fatal life total, I then proceeded to play Pulse of the Forge 3 times on my own turn for the win.

To make the victory even sweeter, the Pulse happened to be foil too.”

“My friend and I were playing our Mirrodin decks against each other and he had just brought out Myr Incubator and sacrificed it to bring out 30+ Myrs. I had out 3 creatures, Disciple of the Vault, Ornithopter and Krark-Clan Shaman. He told me I'd die if I didn't get a mass removal spell. I drew a mountain. I desperately looked at the board. "Duh" I said. I sacrificed Ornithopter to Krark-Clan Shaman. Everything died, my friend lost 30 life and we both sat there amazed.”

“At a local MMD draft one player in our group played out Liar's Pendulum, used it and named ... Intrepid Hero!
I'd say chosen wisely.”

This happened at the Grand Prix trial I was running at my store this weekend. A player cast Barter in Blood to wipe his opponent's board clean. He then sacrificed his two better creatures… leaving the Arrested Elf Replica in play! This was the third game and his opponent had cast no enchantments so far.