Basically the Awesomest Card Ever

Ravnica Preview card is, as the title claims, basically the awesomest card ever: 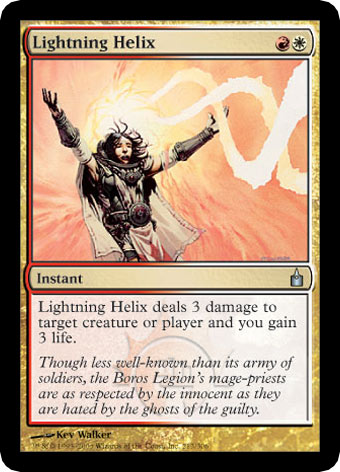 Lightning Helix is uniquely red and white. Its fundamental redness and its fundamental whiteness go beyond the simple mana symbols in the top-right corner. This card costs

and this card costs

, combining two of the original Alpha boons exactly. Similar to popular gold cards like Absorb before it, Lightning Helix attaches the costs and effects of two existing cards, yielding a single instant greater than the sum of its parts; specifically, Lightning Rift is Lightning Bolt at

and Healing Salve at

at the same time. Not very many players will be willing to devote space in their decks for Healing Salve; they'll like Lightning Bolt, sure, but the White reverse? For Swimming With Sharks-reading Spikes especially, Healing Salve is probably not worth the space… That is not to say that these players will not be happy to cash in on three free life stapled to a card that they are already willing to play, though. As with a box of Cracker Jack, the reason you buy the snack is its core product of caramel-covered popcorn and peanuts. But that doesn't mean that the novelty ring inside isn't a selling point that ensures you buy; without that ring, George Peppard would never have cemented his love affair with Audrey Hepburn or dazzled the salesman at the Tiffany's counter. As with the delicious box of Cracker Jack, the unique combination of effects, of damage and life, of snack and unique engraving on an unassuming prize -- all at a discount -- is the reason that Lightning Helix will be the format-defining removal spell of its era.

From one end of the spectrum, Lightning Helix is more or less the best Incinerate you could ever ask for (at least if you were not fighting Spectral Lynx, but you won't be). Keep in mind that even at two mana, Incinerate is generally considered "too good" by today's R&D's standards for instant speed burn cards. Lightning Bolt's onetime second fiddle has itself been replaced in the Core Set by Volcanic Hammer, a card that does equal damage at equal cost to Incinerate, and sees play despite lacking the Ice Age and Mirage staple's River Boa-killing prowess... despite the fact that it clunks along at sorcery speed. Not only does it see play, but Volcanic Hammer is more than good enough to win Grand Prix events in Extended. It would certainly be able to compete at the Champs level in Standard, don't worry about that.

And you know what? Forget about “good enough” Volcanic Hammer. Forget even about the versions of the card that are empirically better. Lightning Helix is a jetpack-harnessed spaceman hovering at the top of the stairs, kicking an orangutan grandma Incinerate to her obsolete end. Lightning Helix is a mighty H. Sapiens clubbing the last Neanderthal to death with a tool revealed to him by a sleek black obelisk. Volcanic Hammer? Incinerate? You've been replaced.

To put it plainly, this new card is nothing less than a complete and utter nightmare for the beatdown. Generally speaking, red players facing off against an opponent's waves of offensive weenies have always been happy to play whatever sort of two mana removal cards available as long as they were fast enough and reliable enough to preserve early game life total. The most extreme example is probably Osyp Lebedowicz in his PT Venice winning Rift/Slide deck. Osyp played Gempalm Incinerator as a random cycling card; Gempalm Incinerator was "fine" in the sense that any old Cycler was fine for digging up his signature enchantments, and once they were out, every Cycler did essentially the same damage or flipped face down Exalted Angels equally well. However when Osyp didn't have the key cards, specifically when he was up against the Red Army, he could use the nakedly meaningless Gempalm Incinerator to piggyback and murder the other guy's Goblins.

From the white perspective, Lightning Helix is also about as nice a beatdown killer as they come. Red players like to pick off creatures with efficient instants, but white mages have a different tactic. They like to absorb damage, take a pounding, but gain life along the way. It's been a while since life gain was the most derided thematic in Magic, as in the past few years cards like Renewed Faith and Pulse of the Fields have forced beatdown players to commit more and more resources to the board in order to get in any kind of meaningful offense against basic Plains... which is exactly what their white control counterparts wanted as they cycled and weathered and drew into lands and answers. There's literally nothing more frustrating from an aggressive standpoint than coming in with a perfectly respectable bear and seeing the opponent's life total hover around twenty for several turns regardless of your efforts. "Time Walk your graveyard," the smug white opponent might say as you, the noble beatdown player lay out more and more 2/2 creatures so that you can start doing some real damage.

You know what it stands for.

Sorry beatdown, all your efforts are for naught. All your creatures go to the graveyard. All because the other guy milked you with a little life gain. Ordinary life gain is bad enough, but when tempo is coupled with removal, regular old creatures seem worse and worse.

Not that Lightning Helix will solely assist control in its efforts to trump beatdown, not by a long shot. This card is a red card. It's not one of the pantywaisted white or black removal spells, not from its Lightning Bolt-reminiscent elimination side, anyway. This card doesn't just give creatures -2/-2 or remove them from the game after they've already tagged you. This is a red kill card, and, as such, it eliminates creatures and players with equal prejudice. Specifically, as a member of the Boros Legion, Lightning Helix is the kind of card that a beatdown deck can use to knock the other guy's Watchwolf out of the way so that he can come in with his dashing double strikers. It is the kind of card that the beatdown deck can use to finish the job that his early game bears started. It is perfectly costed to eliminate the signature problem creatures of the (upcoming) post-Kamigawa Block Standard. Goodbye Dust Drinker. Goodbye Jushi Apprentice.

Lightning Helix is even great against combo decks! This instant would have been a welcome addition to decks trying to fight the Illusions of Grandeur/Donate combination of years past. Players like Trey Van Cleave, already in Red and White, would gladly have added the Helix to their palettes. Not only would this card have quickened their clocks in a match-up where the opponent was gaining 20 life as part of his scripted play process, but was also winning the game more quickly, the three free life tagged to the Helix would have in all likelihood forced a second round out of the Trix combination.

By the time you read this, the Ravnica Prerelease events will be just two days away. As such, the most important consideration will not be Standard, Extended, ancient Extended, or sixty card decks at all, but opening Lightning Helix if you possibly can! I haven't seen a lot of the Ravnica cards, but I can reasonably predict that this card will be a nearly automatic first pick in draft; if Shock went first in Rath Cycle, a card roughly three times as efficient that can take out bigger creatures has also got to be a welcome addition to any 40 card stack of cardboard. Now remember, when you play Lightning Helix, you have to go R/W: That is the price that gold cards demand of players. In other blocks, if you were playing a B/U control deck, you might throw in a couple of Mountains to splash a red removal spell. No matter how good Lightning Helix is – and let's face it, this card is that good – you aren't going to be able to accomplish a splash if you're not already in at least one of red or white (or are completely desperate). If you're on team Selesnya, more power to you. Green mana fixing is as strong as it has ever been. You'll probably be able to cheat one Mountain into your 40 in order to play one Lightning Helix. You'll have Plains to cast half the spell anyway. But otherwise? It is not likely you will be able to string together your one Mountain, your one Plains, and your Lightning Helix in an otherwise non-red/non-white deck.

Put simply, Lightning Helix is a fuel-efficient, sporty import racing around and outmaneuvering the ponderous and clunky Carthaginian elephants desperately trying to make it to Rome. It's the perfect mix of jaw cracking elbow and lover's embrace, an elegant interweaving of offensive and defensive perfection, all at a tidy two mana cost. The secret of cards like Lightning Helix, called by some the awesomest card ever, is that they do a nice job… and they do it cheaply. No, no one is going to fold to Lightning Helix the way they do to Tooth and Nail or Mind's Desire. But then again, Lightning Helix doesn't require more hand holding than a six year old girl in a shopping mall, one million mana before it gets played, or an entire deck bent around it to be effective. This is the kind of card that can go into any deck that can play it, control, beatdown, or mid-range, and contribute. It will stop early beats, kill utility creatures, and eventually deal the last three points of damage to win the game.

For what it does, Lightning Helix is vewwy vewwy close to being too good.

Much luck at the Prerelease!