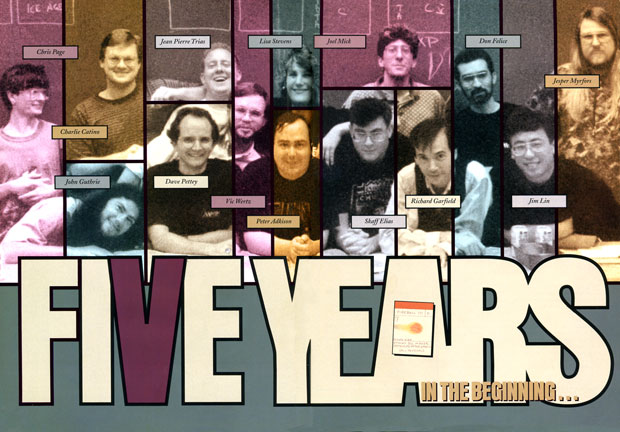 Although Wizards of the Coast is best known for Magic: The Gathering, that wasn't the first game we published. When we started the company I didn't know Richard Garfield, and trading card games hadn't even been invented - our goal was to produce roleplaying games. Magic wasn't planned; it happened because of some wonderful twists of fate.

The company was founded in 1990 with the goal of launching two roleplaying lines by 1992. In 1991 I was hanging out on Usenet in rec.games.board.design when one of my posts caught the eye of a man named Mike Davis. Mike emailed me to tell me about a really good, but unpublished, game designer he knew named Richard Garfield, and about this great board game he and Richard wanted to get produced.

The game was called RoboRally, and players represent superintelligent computers who program hapless robots to race across a dangerous high-tech factory floor. Well, we had no plans to produce board games - in fact we had already identified them as a tough, crowded market that needed enormous startup capital.

I probably would have simply said "Thanks, but no thanks" had not Mike mentioned that he and Richard both had master's degrees in mathematics and that Richard was currently finishing his Ph.D. in combinatorics at the University of Pennsylvania. Something told me that even though board games were problematic, these two guys were worth meeting. They sent me a prototype of RoboRally and we made arrangements to meet in Portland, Oregon, a few weeks later.

Back at the office we instantly fell in love with RoboRally. When I met Mike and Richard, I told them that we really wanted to publish the game but didn't have the resources at that point. I explained that we needed to focus on lower-cost products and that, if things developed, we could publish RoboRally later. I even mentioned that the process would be smoother if we had more money and asked if they would like to invest! Amazingly, they were interested and invested some money over the coming weeks. Eventually we did publish RoboRally, and it's done very well.

That would have been the end of a nice little story, except that Richard asked the fateful question: "If you're not interested in board games, what are you interested in? If you describe the game you want, I'll design it, no matter what kind of game it is." 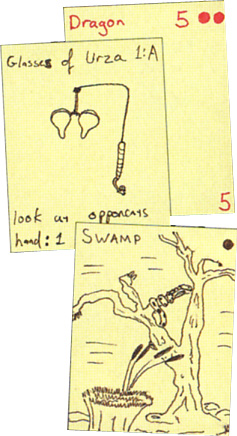 These alpha Manaclash cards (ca. 1991) show card names and game mechanics that made their way into Magic: The Gathering.

Well, it turns out I had been thinking it would be fun to produce a card game with a fantasy or science fiction theme. You see, I was (and am) a big fan of gaming conventions. These conventions showcase a lot of art that never gets published, which I thought was a shame. Plus, you often see groups of gamers at cons who want to do something, but don't want to get involved in a long, complex board game or roleplaying session. So I said to Richard, "How about a card game? It should have a fantasy or science fiction theme so we can use this great art. It should be quick to play, and only use cards to make it relatively inexpensive to publish." Richard said "Okay" and began to think.

One week later Richard described the basic idea of a trading card game to me.

It was at a local gaming convention called Dragonflight. Richard arranged to meet with me and a close friend of mine, Wizards of the Coast cofounder Ken McGlothlen. We drove to Seattle Center (site of the Space Needle) because Ken needed to pick up something.

While we waited for Ken, Richard described the fundamental concepts of a trading card game: There's one set of rules, but each card has its own rules printed right on it. Each person uses his or her own deck, and new cards could be introduced without changing the rules. The cards can be collected and traded, with some cards more rare than others. I was immediately thrilled. A rush of emotion came over me, and I couldn't help but scream, "Wow! This is so cool!"

Ken returned to find Richard smiling and me whooping and hollering like a madman. I hadn't been this excited about a gaming concept since my introduction to Dungeons & Dragons in 1978. As I listened to Richard explain the idea again to Ken, I knew this game was going to be big. Of course I didn't realize how big! Ken, who was also impressed, made perhaps the biggest Magic understatement of all time: "This could sell a million. Maybe even two!"

Of course just having an idea didn't make it so. From that fateful meeting in August of 1991 it took almost exactly two years to get Magic on the market. That time was filled with enough stories of hard work, fun, pain, euphoria, and desperation to fill a novel. In the end we were rewarded with the nearly overnight success of Magic: The Gathering.

While I'm thankful for the role I played, I've never lost sight of the fact that Magic is Richard's invention. I may have inspired him in the right direction, but Richard is the one who had the "eureka" idea and designed the game to follow. When we realized how big Magic could be, we made Richard a major shareholder in Wizards of the Coast, and I've had the pleasure of working with him day-to-day ever since. Magic is an amazing game designed by an amazing man, to whom I owe everything.