Behind the Scenes of Unhinged

t most businesses, there are times when working as a production designer can become rather mundane. Fortunately, I have yet to encounter such a quandary here at Wizards of the Coast, and the announcement of the Unhinged expansion would prove to enliven my job even further. I was offered carte blanche in terms of manipulating the appearance of our flagship product (that would be the Magic game), and most of the time the art direction was extremely ambiguous, when it wasn't actually nonexistent. Armed with a total disregard for all things serious, and free rein over the appearance of the cards, I set to work making things look, well, Unhinged.

Of course, there was more to Unhinged than just reworking some card frames: extraneous bits such as the flux capacitor added to the frame of the Time Machine card and other details were added with the full knowledge that they would go totally unnoticed since they would be either on the back side of a mocked-up product or be eliminated altogether due to space constraints. Seen or unseen, these were details that were planned and executed to (we hope) provide a high level of detail, quality and amusement.

What follows is an overview of a few of the cards and other elements that may provide some insight to the Unhinged creative process, as well as a moment or two of entertainment. Enjoy!

Cards don't always start life looking like the finished piece available from the local retail outlet and Unhinged would be no exception. In fact the Unhinged cards probably saw more permutations of the requested concepts since the art and the frames were heavily reworked in many cases. Weekly meetings were held with representatives from editing to ensure the text was accurate and understandable, R&D to ensure the card worked properly, art to ensure the images were conveying the right feeling, production to ensure we could actually print what we were creating, and a host of others to ensure all the bases were covered and the meaning of a given card was clear. The proofs were passed around the table and notes both cryptic and obvious were scrawled on the pages, to be applied then shown again the following week to make sure the card was moving in the right direction. What follows are a few examples of how some of the cards evolved from notes in a database to the finished version.

This card was slow to develop. The discussion initially was whether or not the central focus of the art was obvious. Did Assfolk wear boots? Should the boots contain leg stumps to indicate someone had been blown up? I tried a concept where the boots were replaced with blackened horseshoes, another with singed and bloody bits of donkey lying around the card frame (that was deemed too gross), but finally the brand art director, Jeremy Cranford, said "What if we add an ass angel? I can have the artist create an ass angel to place on the frame." Strains of the song "Earth Angel" could be heard all around the table with "ass" substituted for "earth" as we decided where to place the angel. 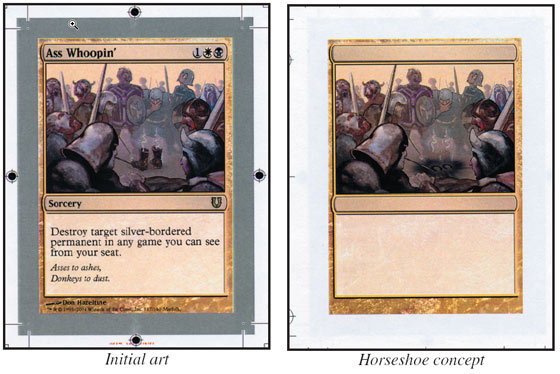 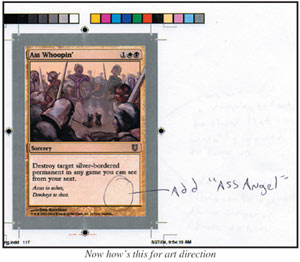 The notes for the concept indicated they wanted some gunk on the card so my coworker Chris Hanis and I ate lunch over a sheet of paper, ensuring we were as sloppy as possible, which I later scanned for use on the card. A sheet of acetate was used to keep the food off the scanner bed. 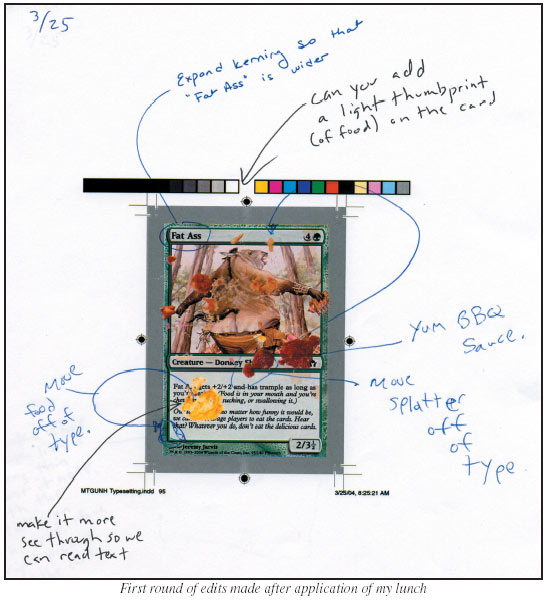 There weren't any notes about this card in the database, so the concept came up in a review to make it look like a Rennaissance style religious painting. lluminated manuscripts were consulted from online library resources all over the world to find the right look for the grotesques used on the letters "R" and "L" and added to a parchment background poached from the Dungeons & Dragons Player's Handbook pages. 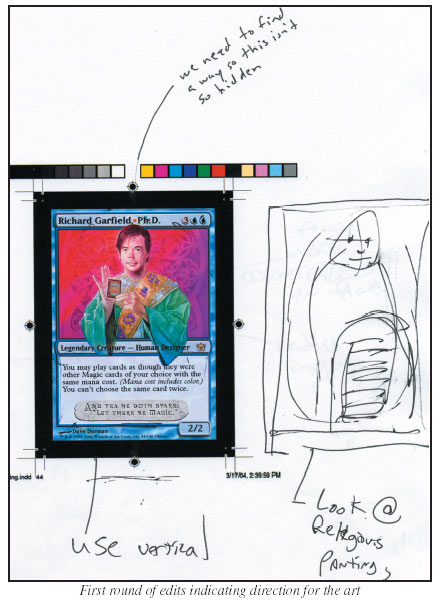 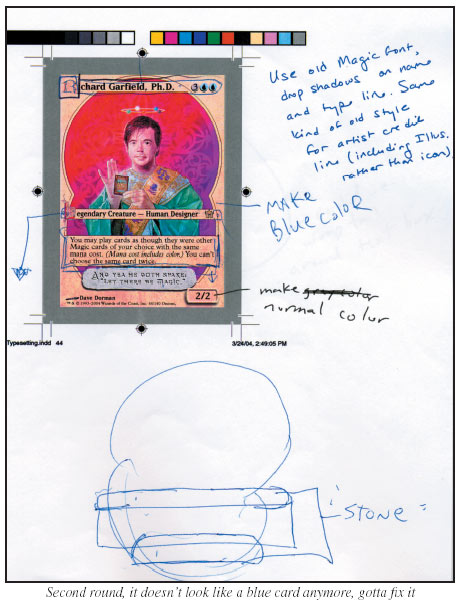 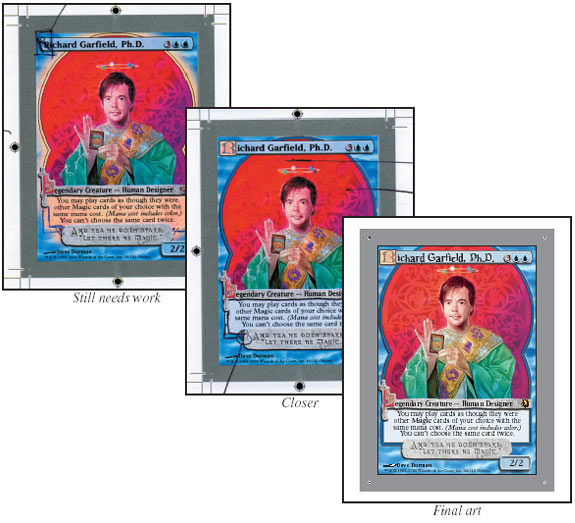 For the uninitiated, "AWOL" means "Absent WithOut Leave." This card required a milk carton with the creature's picture on it so I constructed a milk carton using a 3-D program. This gave me an actual shape for which I needed to make a label. Though only part of it is visible on the card, the entire carton has images and text since I didn't know how the carton would be displayed, and from what angle, during its construction.

The text box for this card was supposed to look like an identification card. I created a card which featured a seal representing the 'company' for which our agent was working. It was used as the background image as well as an anti-counterfeiting feature that was part of the faux lamination which may not be visible here but you'll be able to see it on the actual card. The text around the seal reads "Bureau Of Overt Goblin Espionage and Recovery (B.O.O.G.E.R.), and the ID number consists of my son's initials and birthdate. May Ian Fleming forgive us all. 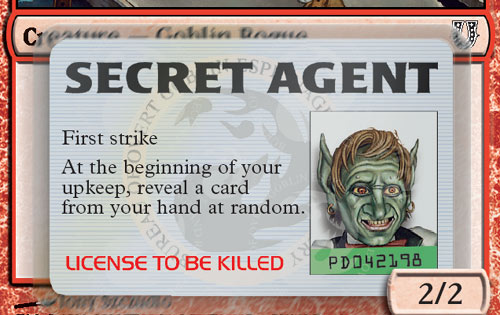 As with all Magic: The Gathering products there are other products you should be watching out for. In the case of Unhinged there was a bowling ball, surplus Soviet-era booster rocket, romance novel and a canned ham, all of which were constructed using the same 3-D program as the AWOL milk carton.

Art direction for the novel was basically "Romance novel." The result was an entire cover which was only visible from the front for the Unhinged packaging. Here for the first time is the back of the novel. I lived in San Diego during the late 70's and 80's and Tijuana was always shortened to "TJ." The line "where everything is cheaper" referred to the abysmal exchange rate of the Peso to the Dollar at that time.

The text on the back reads:

There are also some 'reviews' of previous books by this author:

The name SKAM had multiple meanings, it was based on the well-known brand, and was an acronym for Some Kind of Assembled Met, which implied business practices that weren't exactly what people would call "above board." It was also called Met since legally the contents couldn't be labelled as meat. Therefore a proprietary "brand name" was invented to circumvent this snag saddling SKAM with "SKAM brand meatlike substance" as the full name. A wraparound label was designed for the can which included a product description, an ingredients list and nutrition information, most of which weren't visible in the resulting product shot on the actual Unhinged packaging. The back of the can was blank but did include the ubiquitous key for opening the can. The Met image on the front was a scan of a chunk of pressboard sheeting used for subflooring in houses. 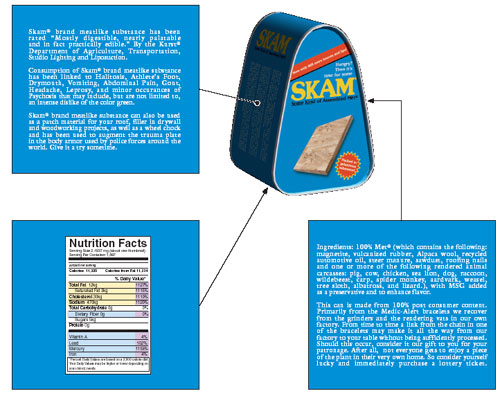 Click the image to zoom on a particular section

And that's my promised 15 minutes of fame. Time for you to get on with your life and for me to get back to work doing whatever it is I do.

Brian Dumas is a full-time production designer and freelance critic with aspirations of monarchy, ruling over his own private island somewhere in the Pacific once he wins several hundred million dollars in the lottery.