Before MagicTheGathering.com, there was ... TopDeck? No, not Mike Flores's Thursday column, Top Decks, but TopDeck Magazine, the successor magazine of the long-running Duelist. TopDeck continued many of the Duelist's features while broadening the focus to include more non-Magic games.

But the differences between TopDeck and the Duelist don't interest us as much just now as the similarities do—specifically, both Duelist and TopDeck were the best (read: only) sources of inside Magic info available in their respective eras.

Today, for Phyrexia Week, we take a look back at the Phyrexians as they appeared during their most high-profile act of villainy: the invasion of Dominaria that gave the Invasion block its name. Then as now, the people working on style guides and card concepts took their work seriously, and the Phyrexian invasion was imagined, sketched, illustrated, and described in every particular. And, interestingly, while the motivating philosophy of the Phyrexians—spread the glorious perfection of Phyrexia at all costs—hasn't changed in all the years they've menaced the multiverse, the details of the Dominarian invasion were different indeed.

This article originally ran in TopDeck #13 in December, 2000. 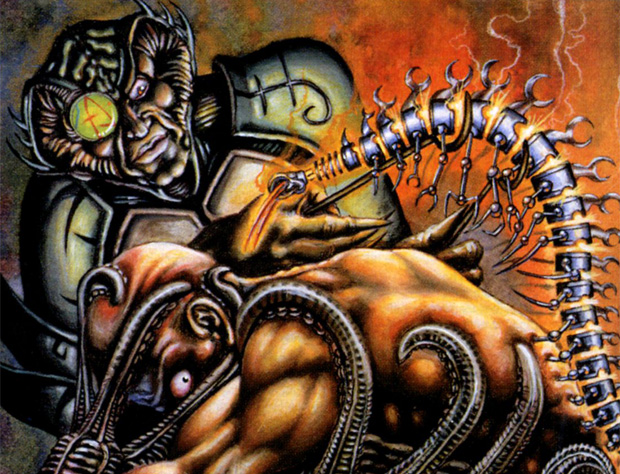 The Six Million Dollar Man, Luke Skywalker, Robocop. What do these guys all have in common? Their lives—or the lives of everyone around them—have been greatly improved by the addition of spare parts. So, if you were going to invade a world—say, Dominaria, for instance—wouldn't it make sense to enhance your force with as much machinery as possible? That seems to be the theory behind the Phyrexians.

As the Phyrexian forces overwhelm all the peaceful inhabitants, let's take a moment to appreciate their finely modified troops. Everything from the really big portal ships to the really tiny battleflies plays a part in the Phyrexians' strategy. It doesn't hurt to have an unlimited supply of scuta either. 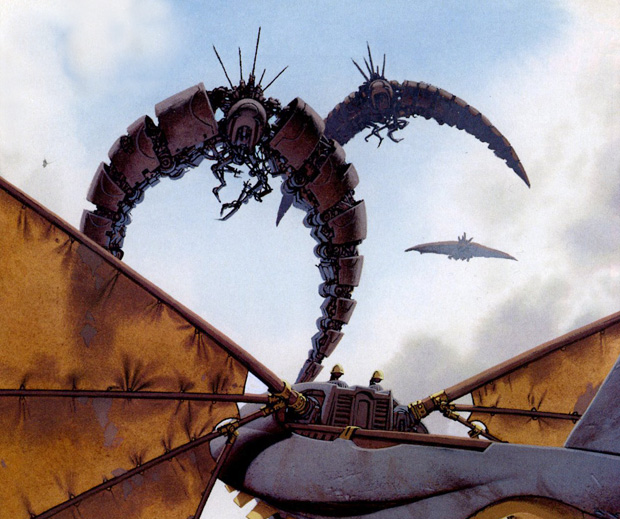 Problem: You want to invade a neighboring dimension, but you just don't know how to mobilize hundreds of thousands of troops. Solution: Interdimensional portal. That's basically what Phyrexian portal ships create. Normally, they fly around with their wings extended. When it's time to move to another plane of existence they curl their wings down. This changes their shape from a line to a semicircle. By taking on this configuration, portal ships can create a tear in space, allowing Phyrexians from one plane to gleefully invade another by the thousands. 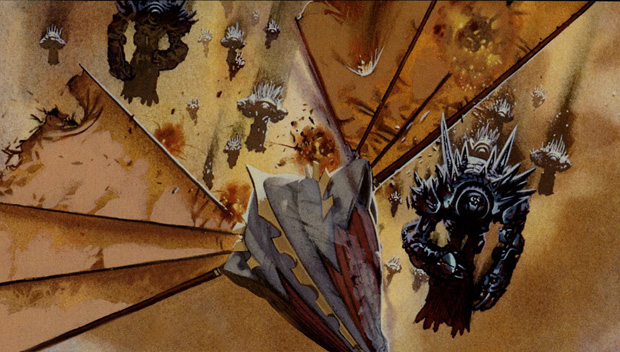 Goblins are too stupid. Humans lack a "real" spine. Elves would rather pick daisies and dance around the forest. That's why genetically engineered shock troops are the way to go. Most of these inferior bipedal organisms would run screaming into the night if they were to come face-to-face with even one of these Phyrexian shocktroops. Thanks to their mindless servitude to their Phyrexian masters, scuta can be used to perform any terrorist action that might cause a normal soldier to go mad. 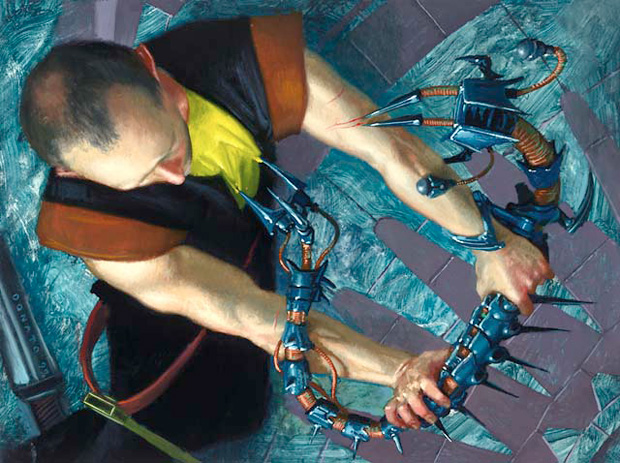 If you can't beat them, make them join you. That's the philosophy behind the tingle. Tinglers are a subtle solution, especially when the goal is to infiltrate or immobilize the enemy instead of smashing them into tiny pieces. A tingle attacks by climbing down its victim's throat and replacing the spinal cord with a new and improved Phyrexian control spine. Talk about "making" friends and "influencing" people. 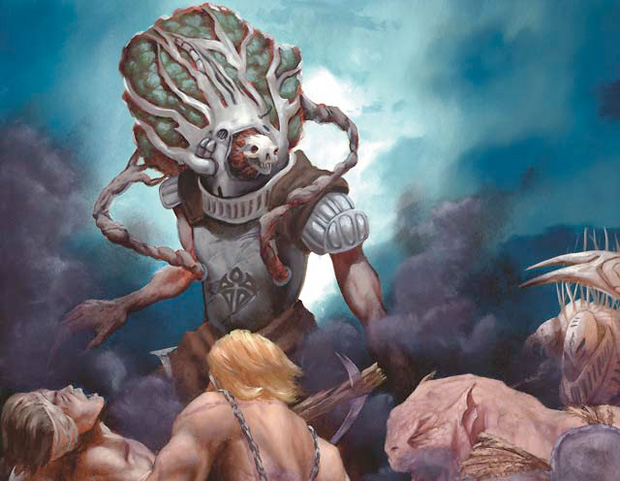 Are the elves of Yavimaya giving you a hard time? Drop plague spreaders genetically engineered to wipe out elves all over their forest. Each different kind of plague spreader is designed to affect one of each of the different species of Dominaria. Phyrexians (even the ones that used to be something else) have a vastly different physiology than their enemies. They have no problem breathing the foul gases discharged by plague spreaders. 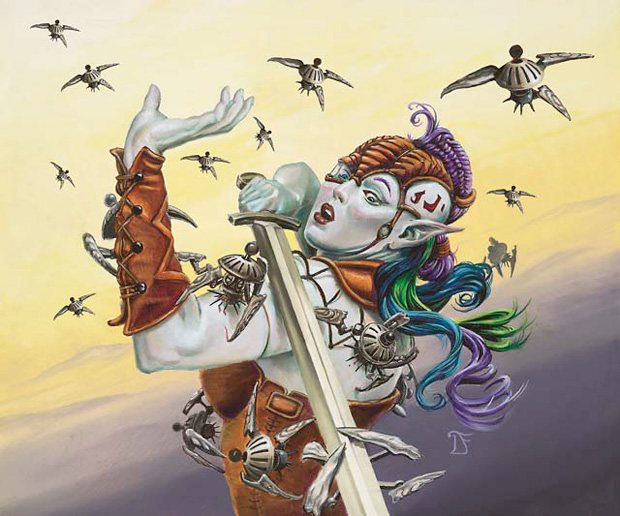 What could possibly be more annoying than normal flies? Flies that kill! What better way to take down a conventional army comprised of soldiers and war machines than with what is essentially a cloud of teeth. Swords can't hurt them. Walls can't stop them. Citronella candles are so hard to find during an invasion, especially this time of year. I don't envy the vat priest that had to graft all those little control spines on millions of helpless flies. 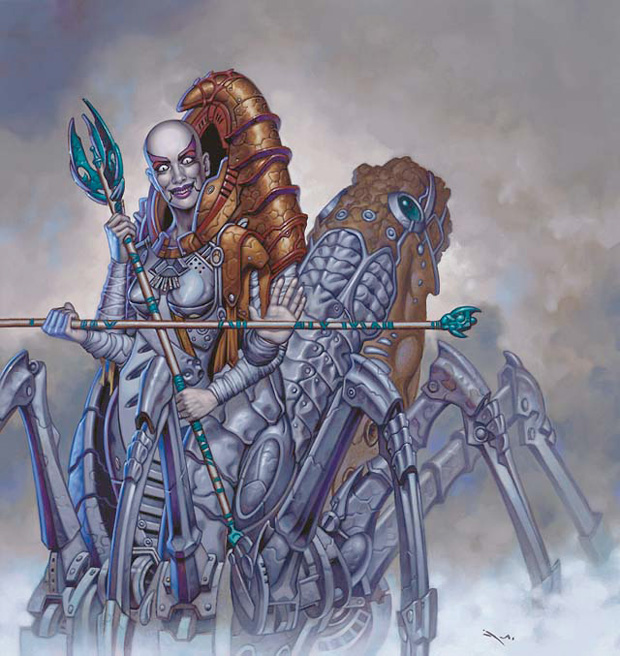 Just the sight of Tsabo is enough to drive a feeble mind mad. Even if stripped of all her power and command over other Phyrexians, her martial abilities are without equal. Tsabo's martial skills were not even born out of necessity, but are a means to her favorite form of entertainment—savoring the suffering of others. Whether she's busy slaying enemies with her own hands or sitting back and watching her minions have all the fun, Tsabo gets a real kick—an actual psychic boost—out of the misery that ensues.