I first started competing in PTQs, a foe that was all too common on the opposite side of the table was this annoying creature named Blinking Spirit. Blinking Spirit didn't look like much, and certainly wasn't very efficient -- it was a 2/2 creature for four mana -- but in the Standard environment after the first Pro Tour, decks were much more dependent on removal than they are today. Rather than just forwarding their own proactive strategies like Affinity or creating a critical mass offense like a modern Goblins deck might, the white and red decks of that era insisted on playing Swords to Plowshares or Lightning Bolt to get their Erhnam Djinns through before playing that game-ending Armageddon. Similarly, the U/W players in the pre-Draw-Go world had a general dislike of countering creatures. They had all these copies of Wrath of God and such a disdain for deigning to counter a 2/2 for four mana that operated with an indestructibility that today's Darksteel Colossus would envy. Even knowing that their Swords to Plowshares were useless against Blinky, the U/W mages of the past would guard their few counters very closely, and desperately look to other board control elements, such as Icy Manipulator or even Mishra's Factory to contain the opposing threat.

It was a strange world.

Blinking Spirit was therefore an ideal finisher itself in certain U/W control decks. Andrew Cuneo, noted innovator of Draw-Go and popular member of the Car Acrobatic Team (alongside former magicthegathering.com editor and current Recent Developments columnist, Aaron Forsythe) won his first Blue Envelope in 1997, killing his opponents via a lone Blinking Spirit (at least in the first). Blinking Spirit could stall the ground, force the opponent to play a second threat (or at least a Knight of Stromgald) in order to get damage through, and all-in-all ensured Wrath of God would snag at least two creatures with no net loss of card advantage in the process. Because Blinking Spirit could dodge Wrath of God itself, it was an ideal and almost unstoppable kill card in the long term for many control decks.

That said, I don't know if Blinking Spirit would be good enough for today's Standard. Erhnam Djinn was an All Star in 1996… yet no one played that mighty four drop when he was reprinted in Judgment. I guess we'll find out soon, though, because "Blinkie" is back in Ninth Edition. Part of me believes that this is because of Kamigawa Block. Because Blinking Spirit can return to hand for free, it -- as a Spirit in the creature type department as well as card name -- is a convenient trigger man for cards like Tallowisp and Waxmane Baku.

Now let's assume that Blinking Spirit weren't good enough for today's constructed Magic. Why might that be? Its ability is definitely strong, and if you play with the blinking spirit, you might even be able to trick your opponent into thinking you have a flying blocker. Unlike in 1996, Sixth Edition rules allow you to put damage on the stack before returning the spirit to your hand, meaning that Blinkie can kill a bear with every cycle, rather than just slowing down the offense in anticipation for the Wrath. Clearly any indictment on the little guy's playability would come from the power-versus-mana cost department. "Nice ability," you might think. "But to get me to play a 2/2 for four mana... you need it attached to Winter Orb or something."

Now what if you had Blinking Spirit, but instead of a 2/2 for four mana, you had a 4/4 for five. Would you play that?

What if there were a few more twists? Would you consider playing this? 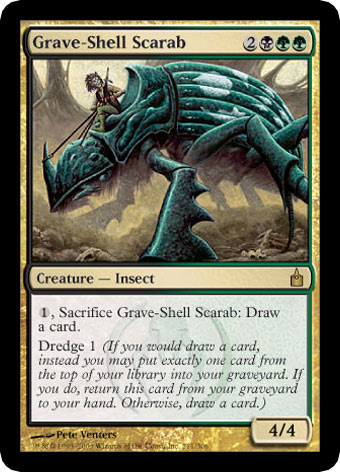 Now I know that when you look at Grave-Shell Scarab, the first thing that comes to mind probably isn't a giant Blinking Spirit... but this card can function in much the same way. Say your opponent crashed in with his mighty Kodama of the North Tree. Five drops would clash as you put Grave-Shell Scarab in front of the ubiquitous Legendary Spirit.

"This is going to hurt me..." you'd mutter, steadying yourself for twin points of trample damage, "... but not as much as it hurts you."

With damage on the stack, you'd activate Grave-Shell Scarab's "Draw a card" ability. Kodama of the North Tree would not be long for this world, and Grave-Shell Scarab would already be in the graveyard... But then Dredge would rear its new mechanic head.

Rather than just drawing an extra card, you'd ask yourself "Is the random card on top of my deck better or worse than a 4/4 card drawing, graveyard-filling, engine for five mana?" As Grave-Shell Scarab would be in the graveyard with the "Draw a card" ability on the stack, you would have -- and probably take -- the option of putting the top card of your deck into your graveyard, netting a big Black (and Green!) Blinking Spirit for your trouble… just make sure to watch out for cards like Nezumi Graverobber.

Now Grave-Shell Scarab is a little bit pricey. It's one more converted mana than Blinking Spirit, but it's probably a better card overall. Besides the faux-Fleeting Image sequencing, Grave-Shell Scarab is a 4/4 creature for five mana. A 4/4 for five mana isn't going to win any Rogue Elephant awards for power-to-mana cost efficiency, but it is in the same class as classic threats like Sengir Vampire or Serra Angel and even playable green creatures like Kavu Chameleon or a hard-cast Arrogant Wurm or Genesis. Moreover, Chris Pikula used to say he wanted to play this card in constructed:

Grave-Shell Scarab, even with its second color of mana, is a creature more likely to affect the board than Kavu Climber, and the options attached to its card drawing ability are at least conditionally more meaningful. Similarly, Mike Turian once made Top 8 of a constructed Grand Prix with this card:

Now besides the efficiency of the creature itself, we have the "drawback," if you can call it that, of the Dredge mechanic to consider. Dredge -- on a Grave-Shell Scarab, at least -- asks us as players to put exactly one card from our libraries into our graveyards. In the abstract this means very little. In terms of danger and drawback, Dredge affects you kind of like a Millstone... Millstone as a threat only usually matters when it is knocking out your fifty-ninth and sixtieth cards. The rest of the time, it only changes how many cards you have in your deck when you win.

However, there is a long tradition of manipulation designed to bury your own cards that has gained popularity over the past several sets. Look at Mental Note for a moment:

Mental Note is completely random. Sure, it replaces itself, but you have no clue what it is going to dump into your graveyard... Yet Mental Note is a very good card. When you play spells like Genesis, Glory, or Wonder, many of your cards are actually better in your graveyard than they are in play. Other cards, like Deep Analysis or Roar of the Wurm, are better in your graveyard than they are in your hand; these cards can't be hit by Duress, cost less mana, and actually increase your relative hand size... You may be bound by having seven cards in hand, but when you have a Krosan Reclamation down, your opponent -- who is staring blankly at the Cabal Therapy in his mitt -- has to play around at least eight.

Finally, any card that either draws new cards or alters the top of your library will have synergy with Sensei's Divining Top. Most Standard decks capable of paying the mana cost on Grave-Shell Scarab will probably play Kodama's Reach, Sakura-Tribe Elder, and the ubiquitous one mana artifact. By changing the top card of your library – either by drawing a card or by putting that top card in your graveyard – you will have a better Top option the next time around. The Dredge side will be particularly useful with the Top when your top card is one you don't want to see; for example, say you have Viridian Shaman on top of your deck but your opponent isn't playing any artifacts. The Dredge ability on Grave-Shell Scarab will help your library progression two different ways.

So does Dredge have a downside? Probably. At least some times. But most often, especially in decks that run graveyard mechanics or Sensei's Divining Top, Dredge probably works to your benefit more commonly than it hurts you.

Ultimately, the question is how viable Grave-Shell Scarab will be as a card. It is clearly going to be a strong card in sealed deck. Green decks, from Barkhide Mauler to Fangren Hunter, have leaned heavily on their big drops to win Limited format games. Cards with additional abilities, say drawing an extra card, make them even better. As for constructed, I have already given you a lot of my ideas on this new card. I think that a lot of Grave-Shell Scarab's viability will come from how fast the format is. The card seems fast enough to help control the board against medium decks, the ones with Stampeding Serow and Kumano, Master Yamabushi, but might not be fast enough for lightning quick decks of Standard past, like U/G Madness or Ravager Affinity. That said, especially given its subtle Blinking Spirit-like qualities, Grave-Shell Scarab may be an outstanding -- and hard to answer -- finisher for any Standard environment that relies on creature elimination as one of its key elements. We'll have to see if Ravnica's Standard errs on the side of efficiency or sheer brokenness before closing the book on this major improvement to Durkwood Boars.