ere you to visit the plane of Ravnica you might continually be surprised by the utter size of many animals. For example, the Rubblebelt Maaka appears to be a simple predator cat, but in truth is actually thought to be a terrifyingly large fifteen feet nose to tail! See here in the art description for it.

Show us a "Maaka" a type of giant, Ravnican cat. It is roughly 15' in length, it has six eyes, a big maw full of sharp fangs. Show it surprising a couple of intruders who have wandered into its domain. It guards the Gruul territory, basically ruins, big stones from old buildings that are now painted with Gruul symbols and guild colors (green and red). 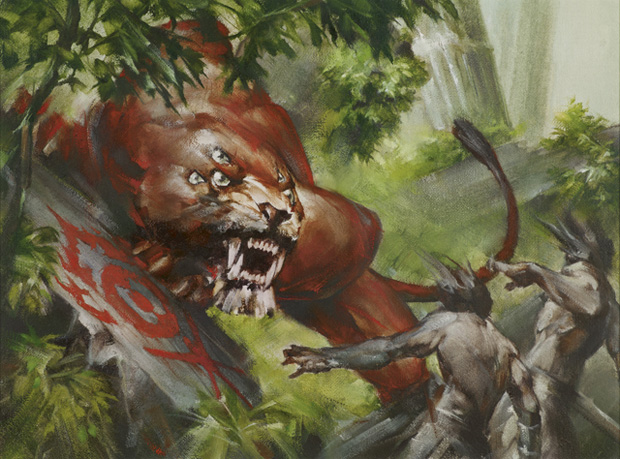 After the Maaka, we can't overlook the Slaughterhorn. While not monstrous it should definitely be approached with extreme caution, or fled from with extreme haste. This especially applies to thrulls of the Orzhov, as they seem at extreme risk!

Show a Gruul beast head-butting an Orzhov thrull and sending it flying. Maybe another thrull is hissing at the beast. 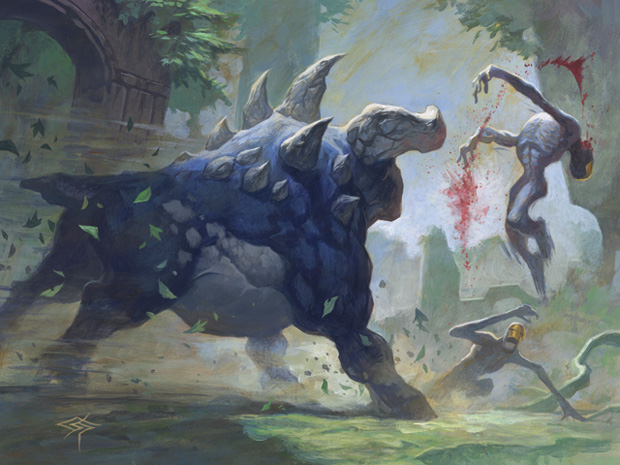 Now, bigger than both of these is the Skarrg Goliath. In this case it actually is bloodrushing through the walls of an Azorius penitentiary. The Gruul abhor prisons for a number of reasons and will obviously take action to free their clan brothers and sisters from the walls that might hold them.

Show a massive beast (30'-40' feet tall) that has just blasted through the walls of an Azorius penitentiary with its bone-plated skull. We see hussars scattered around like toys and maybe a few griffin-riders that have taken to flight. We can see a horde of Gruul prisoners running for freedom from the great gash in the wall. 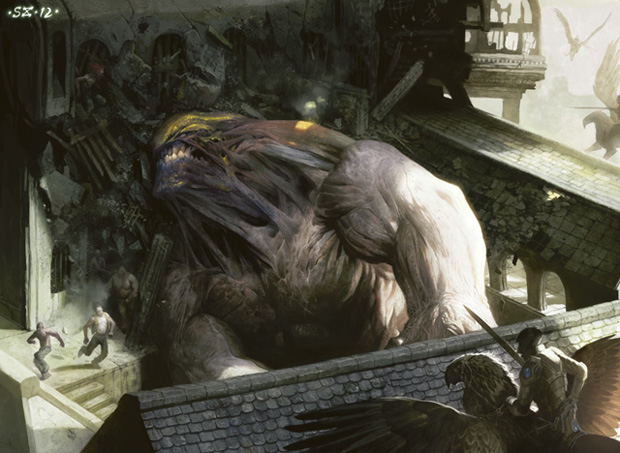 There are a few things you'll note, not only in these art but also in the art of other creatures with bloodrush. First off is that with only a few exceptions, they are shown in motion. Bloodrush is about the charge, the mechanic was originally named "ambush" in playtesting and it is only usable on attacking creatures (something I still mess up occasionally). For that reason it is easy to see where these art descriptions and pieces of art find their inspirations.

Being also that this is the Gruul mechanic, it is easy to imaging that they focus on beasts and animals. But the truth is a number of the bloodrush cards such as Scab-clan Charger and the Pyrewild Shaman are humanoids such as goblins, ogre, viashino–and yes I count the centaur among them.