down whatever Magic cards you are leafing through right this second. Look away from your computer. Cross the hallway, walk down the stairs, slip on a pair of flippity floppities, and snap on the light to your daddy's garage (for those of you not living at home, or perhaps browsing the Internet at work, this may be a fairly long walk… through the snow). Push aside the dusty bottles of 409, anti-freeze, ammonia, and Clorox (but don't accidentally mix the last two or feed Gremlins after midnight). There it is, behind the bucket you used to use to soap up the family station wagon: daddy's toolbox.

For its many points of utility, Shard Phoenix has been used successfully in many different kinds of decks. Ironically for such a storied role player, the Phoenix's defining spot in Magic history came shortly after its first appearance; the card's adoption only grew from there. After Cursed Scroll was banned in Rath Cycle, forever ending the unconditional reign of Dave Price's Jackal Pups and Mogg Fanatics in their most dominant format, Shard Phoenix joined forces with the incomparable Intuition to produce the highly successful Counter-Phoenix deck. Shard Phoenix was so efficient with Forbid and a high mana count of 29-31 lands (!) that eventual Grand Vizier of Magic: the Gathering Randy Buehler didn't even play Whispers of the Muse in his version.

Shard Phoenix joined the early 26/62 Ponza decks of late Rath Cycle, adopted by that board control focused deck's advocates for its attention to creature killing and, frankly, its relatively high mana cost (no reason for mono-Red to want to lower the curve). The game's most dangerous chicken has emptied the hopes of so many Ball Lightnings – tapped and rarely actually needing to leave play – that whole generations of beatdown creatures openly wept last summer when it was announced that the Phoenix would return to the ninth Core Set. Before the release of Mercadian Masques, this Red card even bent, twisted, and warped the mana bases of Survival of the Fittest decks to the point that such pre-Onslaught/pre-Ravnica G/B decks actually included three basic Mountains in the hope of utilizing Shard Phoenix as some kind of ponderous and lumbering Squee, Goblin Nabob every upkeep. Most recently, Shard Phoenix was recruited by certain Red Deck Wins players as a sideboard option to help defend against fellow and rival Red Deck opponents, Goblins, and their attempted monopolization of the mono-Red Zone.

Now Shard Phoenix could and can do many things. Like Masticore, it worked both as a primary source of creature defense and as a durable finisher. Like Eternal Dragon, Shard Phoenix doubled up with an ally as unlikely as Brainstorm to serve as both a card advantage engine and endgame threat. Just as we characterized it at the beginning of this article, Shard Phoenix was a true toolbox, a jack of all trades if ever a Magic card could earn that title… but none of those things was made Shard Phoenix stand out as truly special.

Beyond its role as a 2/2 evasive finisher, flying past its business card title of never ending Pyroclasm, was Shard Phoenix's irresistible long game. Few Counterspell decks could keep up with, let alone stop, the Phoenix's bottomless tank of Never Say Die. The card could be countered once, twice, a dozen times, Shocked, traded, lethally frightened, but as long as mana was available, it was always reborn, would jump in front of Morphling repeatedly if need be. Shard Phoenix was a card advantage engine that would never run out, that was never on the wrong side of an exhaustion war, that never ever quit, that never left its master's access unless specifically targeted by some foul Krosan Reclamation or Tormod's Crypt. For a card to try to step into Shard Phoenix's shoes… err… sleeve is a daunting task. 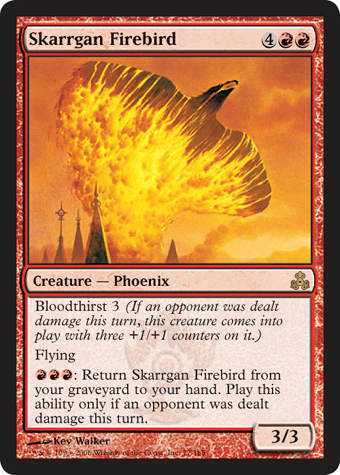 Whether Skarrgan Firebird lives up to its ancestor's legend remains to be seen. Like its Stronghold predecessor, Skarrgan Firebird has the distinctive and recursive creature type shared by only three other birds in all of Magic: the Gathering; it has that characteristic

in the text box that tells us that this new card might just have a resilient tank of its own. What Skarrgan Firebird lacks, if anything, is the subtlety of defense that made Shard Phoenix so in-demand.

Shard Phoenix was a perfect complement to Blue. Blue can do most everything but efficiently kill creatures, and Skarrgan Firebird's primary ancestor was a card that both allowed Blue to kill a million Goblins with no mana activation cost and draw a million cards; it was essentially a perfect match. Conversely, Skarrgan Firebird is a weapon of the Bloodthirsty Gruul; it doesn't want to play nicely with Blue - Skarrgan Firebird hates Blue! Assuming it can register them, Skarrgan Firebird hates trickery, deception, and misdirection. This card is a straightforward weapon that does what it is asked and does so violently. If it kills an army of Goblins, Skarrgan Firebird will do so in the Red Zone, one at a time, the way Garfield intended. Otherwise, it is there only to slug, swing, and smash.

That is not to say that there is anything wrong with Skarrgan Firebird. It may not be elegant in the same ways that Shard Phoenix was, but the card has lineage still. Like the whining farm boy who unexpectedly lost his Uncle Owen and Aunt Beru but eventually became a more than middling swordsman, or the unlikely Hot Rod – who accidentally lit the darkest hour with a mislaid Matrix of Leadership when all seemed lost – or even Buttercup's Wesley, another farm boy who seemed more apt at falling down hills than black garbed swashbuckling, Skarrgan Firebird has potential far beyond his clunky 3/3 for six body. Like many heroes of fiction, and a number of Magic's successful – if pricey – role players, that potential just has to be cultivated a specific way.

Remember, this bird is a weapon of the Gruul. Though its recursion condition is in a sense more flexible than any version that has come before (Skarrgan Firebird can return to its owner's hand on more-or-less any priority), that doesn't mean that the winged blunt object necessarily realizes that is the case. Only when blood has been shed does it occur to the Skarrgan that it might want to consider defying death. In game terms, this should inform your design of decks incorporating the Guildpact Firebird. I suggest playing a lot of efficient burn cards, even unspectacular ones. Combat is all well and good, but if the opponent sees Skarrgan Firebird coming, he might just block when he might not normally do so.

Under optimal circumstances, Skarrgan Firebird is a 6/6 flying creature for six mana. That is quite reasonable, if not particularly remarkable, given that today's viable six-drops are generally 5/5 flying Dragons. That said, it is important to understand what this creature is not. Skarrgan Firebird is not “an efficient drop” and certainly not an unconditional 6/6 for six. If the card actually shows up super sized, it will be because the opponent either was either blindsided or lacked sufficient blockers (or just didn't care about the big bird configuration). The majority of the time a 6/6 Skarrgan appears, it will be because someone aimed at the opponent's face. Think about it like this: even if you use a cheap little Shock to activate the Firebird, for the least possible mana, it will essentially cost seven total and an additional card. Because you may want to preserve card advantage – even as a generally brash Gruul player – it may be useful to run other recurring sources of direct damage. If you can get it to work according to schedule, Guildmate Burning-Tree Shaman can be an asset due to its lack of a mana activation cost. Stranger things have happened than a card like Viashino Fangtail making the cut at the Pro Tour, especially if the said were a Block Constructed format.

If you can get a reliable source of recurring damage online, the possibilities with this card are interesting if nothing else. Because of its ability to return to owner's hand at any time, the Firebird can potentially be a better complement to cards like Compulsion or Thought Courier than Shard Phoenix ever would be. Now the Gruul are not known for their forward thinking, but even smash and grab raids can benefit from a little planning. I'm sure that the Gruul would approve of – even chuckle at – your use of the opponent's collateral damage sources to your advantage when playing with the Firebird. Did he just tap Adarkar Wastes to play a hated Counterspell? Guess what big bird? That's your cue. Little Red men like Zo-Zu the Punisher don't know when to quit, so they keep shooting even when they might hit teammates; ditto on that opening.

At the end of the day, there are several ways you can make this card work, even if you have to work at it yourself. The most straightforward is as a City Tree-style finisher. I don't approve of Vitu-Ghazi as a straight Kjeldoran Outpost replacement, and I think using it as a primary way to win is crazy, but that card is a perfect option for getting damage through a Counterspell deck with the beatdown as the opposing control stabilizes the late game. Similarly, you can go all-in with little Red men, eke out a point, and satisfy your recursion or super size conditions. I am a bit skeptical about such a deck being able to do both at once, as that would require nine mana, but it's certainly feasible. Given the landscape of Standard, with token creatures a staple element of both Blue and Green decks and tons of quality in small packages, a card like Honden of Infinite Rage might be a reasonable option even when out-of-theme. That enchantment is both reasonably economical and a source of “free” damage that can fulfill your Firebird requirements for, again, both recovery and bird bulk (keep in mind that, if need be, the Honden can pick off threats that didn't for the most part require dedicated cards without itself spending one). When paired with a Honden, Sulfuric Vortex, or similar source of persistent damage, I think you will find that the Firebird can tap into the same kind of persistence that made its forerunner so great.

Skarrgan Firebird is a solid card, sure to be a staple over the course of the next year. The challenge in taking the greatest advantage of it as a late game threat and card advantage engine is in finding the right deck, where the newest member of the Phoenix foundation can contribute and piggyback synergistic damage elements, even when the opponent knows that the threat is on its way.

This one is for you Johnnies: Get to it!