The Boys of Winter

thought long and hard for a few seconds about whether or not to do another Home Runs article for Coldsnap. I am now sensitive to the Magic fanbase outside of the U.S. that does not quite understand the baseball analogies I sometimes make. The deciding factor for me was the recent worldwide broadcast of World Cup soccer/futbol. The way I see it, World Cup is a time for the world to gang up on the U.S. and kick them around the place. Apparently, this is what transpired, again, this World Cup. I do feel a tinge of guilt, however, because I did get to enjoy watching the men of the old country take the Cup. (The man, Cavotta, is American, but the family, Cavotta, is Italian.) So, I feel like the world has that to feel good about while this American guy swings some jargon from his second favorite sport (props to the old-schoolers who still enjoy Track & Field, the contests of the ancients!) 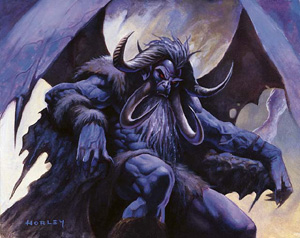 Just to refresh everyone on what “Home Run” means, here's a little primer: A baseball home run is when a batter smashes the ball out of the ballpark and rounds all four bases in a triumphant jog. A Magic home run is when a card is a smashing all-around package with a good name, illustration, flavor text, and all three compliment the card mechanic. We've hit on this twice before, in “Going, Going, Gone!” Hey That's Aliteration! and in Snack Time With Vorthos. I guess that makes this article the Trifecta…or the Hat Trick. Yay sports! (After typing that last line I was really tempted to switch gears and make this an Ice Hockey thing. You know, for Coldsnap.)

Anyway, back to Magic. What we found - we being fellow Creative Teamer Brandon Bozzi and me - when combing through Coldsnap was that the cards that stood out with the best names and art were often lacking flavor text. Unfortunately, that takes these hitters right out of the lineup. Cards with names like Sunscour, Void Maw, and Jokulmorder have none, and so they are benched for the game. Cards with sweet art like Dark Depths, Herald of Leshrac, and Mouth of Ronom also ride the pine for that same reason. It's unfortunate, but the rules are the rules. So who's up first?

It's no mystery that I absolutely love this artwork. Stephan latched onto the one thing I was hoping would come through and really nailed it—that big rusty hunk is ornery! You can see in the tension of the “leash” that it is resisting the little Rimewind nitwit who is tugging at it with all his measly might. And it doesn't end there. Not only is the gesture of the piece spot-on, the execution is superb too. Did you hear that clunk? That, my friends, was solid contact. 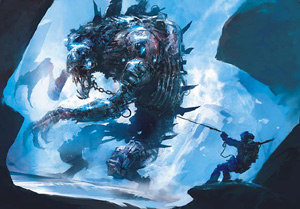 The name Phyrexian Ironfoot is a nice one. It does the two things it needs to do to make this card hum. 1. It uses the “P” word—Phyrexian. In Magic land, that word carries a lot of weight. It encompasses thousands of pages worth of story all in nine ominous letters. 2. It captures the mule's nature of this creature. “Ironfoot” just sounds like something that doesn't want to follow you. And, to boot, it describes the material with which it was built. Reluctant as it is to move, this big palooka is rounding second base.

Ironfoot's flavor text is not quite as good as the art or name, but that does not mean it's a stinker.

It took the Rimewind cultists days to realize they had successfully activated the creature—it just wasn't interested in moving.

It may not be a poetic masterpiece, but it does wrap in a bit of the Coldsnap storyline with the Ironfoot being a high-maintenance crank. It might be slowing down, but it's still rounding third.

Why did we give the Ironfoot a bum rap, right from the start? Because its mechanic told us to. It does not untap on its own, and you have to make an icy effort to get it to do so. That sounds like old Number Seven if you ask me. (Wow, did I date myself with that Grizzly Adams reference or what?) Given that ornery mechanic, the art, name, and flavor text support it as well as any other card I can think of.

I remember liking this painting from the moment it was pulled from the FedEx box. It just sang out with crazy color. It has a magical glow that is really hard to hit that strong in paint. The icy blue hair and white, pupilless eyes make this guy seem a bit different from other druids. I also quite like the glowing green (illusory?) vines that squirm and curlicue behind him, acting as a decorative framing element. A solid hit. 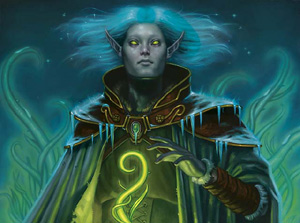 Does the Druid stumble around second base? “Boreal Druid” is not a fancy package, nor does it introduce us to any new ten dollar words…or does it? In this case, the word “boreal” is serving a dual function. It's dictionary meaning, “Of or relating to the north; northern”, is combined with its Coldsnap meaning, “The spreading circular area radiating from Rimewind keep in which unnatural winter swirls.” This being the case, I am willing to let the Druid try and stretch this hit into a triple. If everything else goes his way, he might have a chance at an inside the park home run. (This is when the ball is not hit far enough to leave the playing field, but the hitter makes it all the way around the bases anyway. Very rare.)

The northern elf's flavor text is a doozy. It pretty much sums up for us what the deal is with snow creatures. You can read more about it, if you haven't already, in I Freeze, Therefore I Am.

Some creatures are bound to the cold by Rimewind magic. Others seek it out, adapted by two thousand years of the Ice. The Boreal, where Heidar's frigid sway is strongest, is home to both.

I may be mistaken, but this might also be the only piece of flavor text that tells us how long the Ice Age lasted. Oh, and it tells us the Coldsnap meaning of Boreal as well, and who runs the show there. Wow, the Druid is a world-building wonder. I think he's picking up speed around the bags, ladies and gentlemen. He might be what they call a slappy—that's a guy who does not have a lot of hitting power, but who rarely whiffs and is usually a speedy fella.

I think it goes without saying that the name fits the mechanic. Who makes mana? Druids do. Where do they make snow mana? The Boreal. Cracker Jacks for everyone. The art fits in well too, with the blue hair and weird eyes indicating some cold twist to this elf. The flavor text does not help or hinder. Since he's got momentum built up, I am leaning toward letting him score—maybe on a gutsy diving slide into home. What do you think, is he safe at the plate? 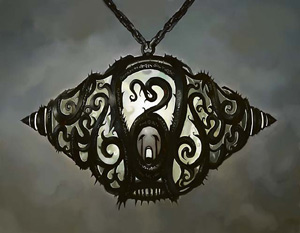 Ah yes! One of my faves in the whole set. Actually, one of my faves, period. This art is so simple, yet so darkly beautiful that it makes me mad that I did not paint this. (That's how you know when something's really good—when the other artists wish it was their own.) And what tops it all off, but the little mask of Yawgmoth smack-dab in the middle. Bam! That's a towering fly ball. “Majestic” is the word the old-timers use to describe ‘em. Thome style, for those of you who know what I'm saying. For those of you who don't, try “Huuuugggge!”

The name Mishra's Bauble packs a lot into such a little trinket. Like the word “Phyrexian” the name “Mishra” just reeks of ancient history, a dark, twisted time in Magic's past. It also makes this card a nifty little bookend to Urza's Bauble from Ice Age. Little tip for the newcomer: Urza and Mishra were brothers, and they kicked each others' butts around in a massive war of magic, artifice, and egos. In that war, Mishra used the vile power of Phyrexia to gain an advantage over his bro, but it all ended when Urza pretty much blew up the world and caused the, hey—the Ice Age! And that brings us back to Mishra's Bauble. I'd say that name carries a big stick. I can hardly see the ball, it's flyin' so high.

"Arcum is a babbling fool! Phyrexian technology is our greatest blessing. Take this delightful trinket for instance . . ." —Heidar, Rimewind master

It combines the material of dusty old tomes (references to Arcum Dagsson and Phyrexian tech) with Heidar, a character of new legend. It delivers this in a fiendishly lighthearted quote that, to me, sums up Heidar's complete madness wonderfully. Anyone who would call Phyrexian technology “delightful” must have a few screws loose.

If I was a Hollywood screenwriter, I would have clinched this article with the big blast from Mishra's Bauble. But I am not—I'm a bard from the Utvara region, so I wrap thing up with Deathmark.

It's not that Deathmark's art is so totally awesome that I use it as my clean-up hitter. The art is strong, with a memorable iconic design and an interesting gore/snowflake concept. I like it quite a bit.

And it's not that the name is the greatest either—though I like it quite a bit. I am a sucker for one-word names on one-mana cards. They seem to make such a tidy little package.

And it's not that the creative elements of the card really meld with the mechanics well. They're not dancing a jig like the Ironfoot, but they deliver the “kills stuff” message well.

Ah, you noticed that I skipped over the flavor text. Well, that's why I am wrapping up The Boys of Winter with Deathmark.

I like this piece quite a bit. It's darkly funny, but what I like about it the most is what it does not say. What it does not say is “who is that body?” Well, I can tell you who that body is. It's Taaveti of Kelsinko. If you read last week's feature article, “The Italicized World of Coldsnap,” then you know the scoop. If you did not, then I suggest you read it—it's loads of fun. Some folks wrongly assumed we were joking when we killed Taaveti right there in the feature article, and that the woodland ranger was still alive and tracking folks through the snows of Terisiare. Nope. He's now at the epicenter of the wondrous rubine spray described here:

“I hope it's true that every snowflake is unique, because I never want to see one like this again. Now clean up that body." —Thangbrand Gyrdsson, Kjeldoran patrol

No jokes—the dude is dead. Oh yeah, as far as Home Run flavor, Deathmark just clears the fence down the right field line. Hey, is that blood on my thumb? (evil laughter echoing.)

Break out the longboats and put on your helmets—we're headed to Kaldheim! Magic's first-ever Norse-inspired set, Kaldheim's jam-packed full of Vikings, Gods, and Runes, and there's even ...