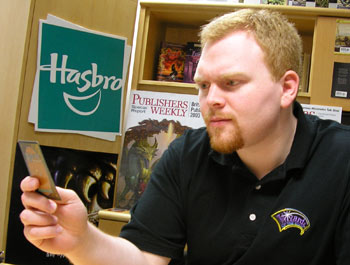 First and foremost, I am a Magic-aholic. For more than 10 years, Magic has invaded my thoughts and captured countless hours of my free time. I have played in hundreds of events and have received the same MPR mailings that you are getting now. I love Magic, and more importantly, I respect it.

You probably know a dozen guys just like me. I was the guy that drove two hours to go to a PTQ. I was the guy that spent days agonizing over card choices for my decks. I was the guy that worked and toiled to improve my game from ignorance to respectability. Like many of you, I was never an anointed Pro Tour player. I am by no means a robotic über-genius that never makes the wrong play. Also, I can honestly say that I never played Magic for the prizes.

I played because a passion burned inside me to improve my game and rise above the competition. To me, Magic isn’t a competition against opponents; it is a competition against myself. For every champion like Jon Finkel or Kai Budde, there are hundreds or thousands of Magic players just like me. We are the aspiring Pros. We know that one day, if we work hard enough and pay our dues, we can become professional Magic players, too.

But the truth is, I can’t follow that dream anymore. Strangely, not being able to compete has turned out to be one of the best things to ever happen to me.

When you wish upon a Kokusho, the Evening Star…
Six months ago, I was in a MBA program, spending most of my waking hours studying finance or thinking about Magic. I had no idea what I wanted to do after graduation, and the sand was pouring through the hourglass of my college years.

Then, in one of those meeting the girl of your dreams/life-changing moments, I learned of an opening on the Magic Brand team through www.magicthegathering.com. I hastily put together my resume and cover letter. In a series of events that still puzzles and stuns me, I stood out from the pile of applicants for the position and landed my dream job. Before I could wrap my mind around the idea, I was moving 2,000 miles across the country. In three short weeks, I left behind everything I knew to pursue my passion, and it has been the second best decision of my life (my fiancée would break my arm if I said otherwise).

“Sir Edmund Hillary, you climbed Mount Everest… now what?”
Wizards of the Coast is unlike any other company in the world, and for a variety of reasons. Few companies allow their employees to play a card game in the middle of the day. I’m sure that even fewer companies would ask someone to add more skulls to an advertisement. Things at Wizards are both bizarre and insanely fun.

The employees in the company have deep opinions about the products, and to a person, feel strongly about making the player’s experience as positive as possible. Wizards also has a strong sense of community. We are all gamers, and we want to make products that gamers love.

Why am I telling you this? I want everyone to know about the constant positive changes that are brewing at Wizards, and how these changes will benefit you. Wizards has a long history of player empowerment, and there are several upcoming products and changes to programs that I am tickled pick (maybe even maroon) to share with you.

What the Heck is a Brand Team?
For those who do not know, the Brand team patrols the halls of Wizards with large branding irons applying the searing-hot stamp of Magic on everything in sight. Or maybe not.

The Brand team is responsible for creating and communicating a clear vision of our products and Organized Play programs to our players, tournament organizers, retailers, and all other Magic enthusiasts. We bundle all of our products’ and programs’ positive attributes together and then let the public know why they would want to buy Magic products or participate in tournaments.

To show you what I am talking about, I have listed some of the current things that Wizards is working or has worked on to benefit you, the player.

More Fat = More Fun
A top priority for the Brand team is to make sure that our products are the absolute best that they can be. Magic cards have top-notch art along with colorful names and flavor text. Our packaging is memorable, and our products set the industry standard in terms of quality. That being said, we are constantly looking at ways to improve our products.

One initiative that was taken to improve our products was the revamping of our Fat Pack. The old Fat Pack had disposable packaging and was more-or-less a group of really cool components shrink-wrapped together. One question that developed around Wizards’ headquarters was “Why not have the packaging be a usable component of the product?” Most change at Wizards begins with the question, “Why not?” Generally, the results of this question prove beneficial to you, the player.

The Fat Pack is no exception. The components of the all-new Ninth Edition Fat Pack are contained within two durable card boxes, which by the way, combine to make an original piece of amazing Greg Staples art. Even the outer sleeve of the Fat Pack is usable. The wrapping around the boxes turns into a special miniposter featuring hot pieces of Ninth Edition artwork.

Busting at the seams, the Fat Pack also contains six booster packs (two drafts, anyone?), a life counter, a 40-card land pack, an oversized Ninth Edition card, and a Player’s Guide. All in all, that is one sick bundle of loot.

As a Magic player, I constantly think about what I would want from a product or program, and the new Fat Pack more than exceeds my expectations. The Fat Pack has all of the coolness of the Beatdown box, but with killer new components. It’s very saucy.

This redesign was a huge undertaking at Wizards, and the responses that we have received have been outstanding. I am actually contemplating building a miniature fort out of them, if I can manage not to crack them open for the booster packs.

So, the upcoming Ravnica fat pack will be even juicier than the already amazing mentioned Ninth Edition fat pack. Like the Ninth Edition fat pack, the Ravnica fat pack will feature a player's guide, two card boxes with original artwork, a fat pack sleeve that converts into a mini-poster, six plastic dividers, six booster packs, a 40-card land pack, and a special Ravnica-themed lifecounter.

In addition to the novel, the fat pack will have a super secret promo card in it. I could tell you all about it, but all will be revealed soon...

See the World… Beat Interesting People
Another terrific change that began this year is the powering up of our Pro Tour. This year we incorporated some major changes that are milestones in Pro Tour history. The first Magic Hall of Fame class will be inducted this year, and the all-new Player’s Club has made being a professional Magic player an even better profession. Who wouldn’t want to earn free travel and appearance fees for attending high-level events?

Next year, our Pro Tour is going to get even hotter. What could be spicier than a free trip to Hawaii in March? If you qualify for the Pro Tour, Wizards is going to fly you, for free, to Honolulu. We will repay all of your hard work and dedication with a scenic getaway to one of the top destinations on the planet. You can win some serious cash and spend a couple of days relaxing on the beach.

This is just the jumping off point for our Pro Tour revitalization initiatives; I can’t wait to see what other things we can do to make your Magic experiences even better.

Ravnica: City of Bombs
At this point, many others have already been previewing Ravnica better than I could. What I will say though is that from my perspective as a player, Ravnica is downright amazing. Those fine folks in R&D did a bang-up, five-star job on both the set and the block. I think Ravnica will stick out in people’s minds as a banner set in Magic history. Check out the very cool Ravnica web site for all sorts of juicy goodies!

And of COURSE I expect to see each and every one of you playing at the Ravnica Prerelease on September 24-25 too! Don't make me come out and find you!

The Art's the Thing
You may have heard Alex Tinsmen, my compatriot in Brand arms, talk about this in September 1st's Ask Wizards. If not, what the heck were you doing? Playing Magic or something?

Here is what she said:

Beginning this October, we will begin selling limited-edition, high-quality collector's series Magic art prints and canvasses featuring the artwork of paint-masters such as Greg Staples, Scott Fisher and Donato Giancola.

The art pieces will be available in two different forms:

Make sure that you act fast. There are only 1,000 limited edition prints and 250 limited edition canvasses. The prints are sequentially numbered and signed by the artists; the canvasses are hand-signed and also hand-numbered.

Check out the Shivan Dragon and Viridian Shaman. Pretty sweet huh? Watch our web site for more images to come!

Don’t Believe Your Eyes?
Finally, we are giving Magic Online players more reasons to log on and bring the beatdown. For years, fans have asked if classic Magic sets would return via Magic Online. And for years, Wizards hasn’t said peep. Until now.

As announced in Bennie Smith’s www.magicthegathering.com column on June 30, Mirage will be coming to Magic Online later this year. Classic Magic fans will be thrilled to see old-school cards such as Frenetic Efreet and Grinning Totem return. New Magic fans will get to relive Magic’s early days and discover the strange and awesome powers of cards like Lion’s Eye Diamond and Cadaverous Bloom.

The return of Mirage™ is one more decision made with you in mind. In Delusion… or Conclusion, Rather Now, you all know more about me than you ever could have wanted. My shoe size is 13, too. I have enjoyed writing about what makes Magic tick and how Magic decisions are made. I look forward to sharing more with you in future MPR mailings. In the interim, you can find me most nights in the casual rooms of Magic Online. Bring your deck and any questions.

So long, and happy shuffling!