Cage Match With The Stars 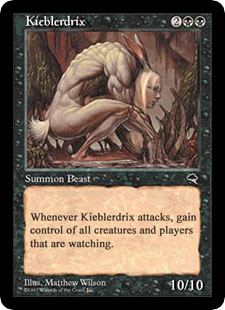 don't know about you guys, but I just cannot figure out how Drew Lachey and the clod-foot Jerry Rice defeated the powerhouse that is Stacy Keibler on Dancing With The Stars. Drew Lachey is a 2/2 weenie at best, and Jerry Rice is like Shivan Dragon- dominant in the old days, but who really plays with him now? If you really think about it, Stacy's legs are a good 4/4 each, and that doesn't even count the built-in Control Magic each one has when they move. But, even with all that power, the Kieblerdrix was defeated.

How was this possible? Was the fix in? However this travesty went down, I was befuddled. And I was similarly befuddled when I saw some of the results from MTG.com's Legends Brackets. There were matchups that I was certain would go one way, but ended up going the other. Could it be that the same bunch of misguided fans cast their votes for both Jerry Rice and Meloku the Clouded Mirror? Are all the dog lovers out there voting for Drew Lachey and Tolsimir Wolfblood?

I thought for sure the old-school might of Sol'Kanar the Swamp King would overpower a dog rider from the guild of wishy-washy. . It seemed to me no wonder why this was a 2-15 matchup. He's the Swamp King, for Karona's sake! He's huge and has that bad-ass, spiked beat stick. I am a fan of the underdog too (pardon the pun), but I just could not see Tolsimir dethroning the Swamp King. I also did not see the dubious result of the Meloku vs. Spirit of the Night matchup. What about a 6/5 flying, trample, pro black, haste face-smasher did everybody miss? Did they feel bad for the dainty man with the make-up and funny hairdo? I have no idea. Or, rather, I had no idea.

In order to retain my slowly slipping sanity, I gathered my wits and decided to play out in my head the battle between these Legendary combatants and see what could make the VojaMan defeat the king of the marsh, and what could have possibly gone wrong in the thrash party that Spirit of the Night should have thrown on Meloku. I had to do it, because I was already fraying- and then my boy Gedeon McKinney was not voted into the top 12 on American Idol! I already had to play out the scene in which his rich Motown voice cursed in the foulest of gutterspeak to all the folks who voted for Covais the Clouded Mirror and Bucky Wolfblood.

It could have all happened right at the beginning, right when the Cage Match organizers decided not to have the battle take place near any swamps. To make things worse, they opened the doors to the arena right around 3:00. What's the big deal with that, you ask? Well, the arena filled up with scads of youngsters just getting out of school. Most of Sol'Kanar's older fan base was still at work or stuck at home playing Magic Online. So anyway, the scales were tipping in Wolfblood's favor to begin with. And then this is how it went down:

They glared at each other, the Selesnyan Warrior and the Swamp King, each drawing anxious breaths in anticipation of what was to come. Sol'Kanar grinned, thinking of the pulp that Tolsimir's head would soon be. Tolsimir waffled, overwhelmed by the sinuous mountain of vine and doom that towered before him. Unsure as he was, he would not back down. He could not back down. The name of the Selesnya Conclave was his to uphold, (and there was the cage they were stuck in).

The crowd was feeling it too. It seemed to salivate with bloodlust just as Sol'Kanar did. But they were not hungry for Conclave blood! It started as a hushed chant, echoing here and there in the arena. As it was repeated, more people joined in. “Voja!” they cried . “Voja.” This unexpected vote of confidence gave Tolsimir heart. He bore down and summoned up all of the might of his Selesnyan brethren. He could hear the Chorus. It began to ring loud in his ears, the crowd's chant grew to a roar, Sol'Kanar responded with a bellowing, spinetingling war cry of his own, then the signal spell popped with a blinding blue light and it was on! 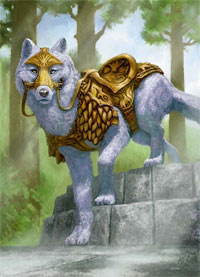 Tolsimir immediately brought the crowd to their feet as he joined in their cry and called out, “Voja!” A white light flared before him, and from it leapt a great snarling wolf... right into the path of Sol'Kanar's falling cudgel! Voja was pounded to the dirt before his hind legs even cleared the glow. The white light dissipated slowly, punctuating the hushing of the crowd and the sinking of Tolsimir's heart. But before it was gone, it illuminated the glistening crimson splatter on the ground and the jagged wet teeth of the Swamp King's grin.

Tolsimir feared that his head was soon to be split as well, but Sol'Kanar did not swing. Instead, he glared from Tolsimir to the crowd, pointing his weapon at the crumpled wolf. As he was gloated over Voja's body, it faded and disappeared. While the crowd was startled to see the body dematerialize, Sol'Kanar just felt as though that was what happened when one was hit so hard by the King of the Swamps. The forlorn crowd began to chant the word again, but this time in respect for the dead. “Voja.” “Voja.” The somber chant was interrupted by a loud and angry shout. “VOJA!” The white light gleamed before Tolsimir once more, but Sol'Kanar was ready. He swung full force into the white light and it was dulled by a spray of blood. Voja's lifeless husk flopped down from the crease of light.

This scene plays out time and time again, with the only difference being the angle from which the club is brought to Voja's skull. Sol'Kanar paints the cage and its contestants red with the blood of the wolf. But he tires. With each call to Voja, the wolf springs farther from the summoning glow. This nauseating ordeal of blood and butchery would soon come to an end. Sol'Kanar was out of breath and out of strength. Tolsimir could sense the vulnerability in his foe. He waited a moment, glared down at the kneeling, panting Swamp King, and spoke the word.

“Selesnya!” With the word he drew his sword, its sliding steel in sibilant harmony with his Conclave warcry. In one smooth stroke he cut the Swamp King's thick, knotty neck and it was over. He called to his wolf once more, and the two stood over their vanquished foe, soaking up the roar of the crowd.

Meloku the Clouded Mirror vs. Spirit of the Night – Cage Match 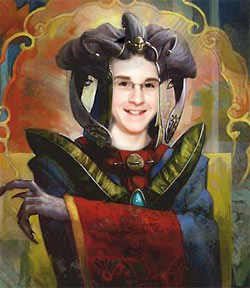 I can't do it. I tried but I just can't. Whenever I began imagining the scene in which Meloku gained the upper hand, something took over my mind and quickly turned the tables- leaving Meloku in an icky, crumpled pile.

As it turns out, this image in my mind is much more therapeutic than the scene with Tolsimir and Sol'Kanar. Sure, I can now see how Tolsimir might defeat the Swamp King. I guess I can buy it. I feel a little better about that. But this one is another story. I feel much better not being able to envision a little funny looking guy taking down the Spirit. Really, folks. Look at him. He's too into fashion to be an ass-kicker. And look at those floppy ear things. It's almost like he became so enchanted by the Kieblerdrix that he tried to dupe her long and elegant ears. That did not go well for him.

The only conclusion I can come to is that Covais and Meloku received pity votes. “But he's trying so hard…” “Look, he snubbed Simon!” “The art looks really cool in foil!” Bah!

Let us bow our heads in shame, and in memory of mighty competitors, fallen to the whim of misguided voters.