to House of Cards! Those of you looking to see a Time Spiral preview are in luck. This week, I get to preview Yoda. Well, it's not actually Yoda, but there are some similarities. The Empire Strikes Back introduced us to the Jedi Muppet, but it took another twenty years before we got to see him in action, battling the ridiculously titled Count Dooku in a style that was a cross between Bruce Lee and Sonic the Hedgehog. Before that, we could only imagine what Yoda was like in his prime, but we all knew that it had to be cool. The gentleman that I wish to discuss today has been known for much of Magic's history: you've played with his cards, read about him in novels and flavour text, and seen him in the pages of all the Dominarian tabloids. We've had so many hints, but what's he really like?

There were rumours, corroborated by Magic novelist Jeff Grubb, that this particular character had a bit of a sibling rivalry going on … with his brother! I'm not sure how it started (probably with a girlfriend-stealing), but things got so heated between the two that their rivalry quickly escalated into a full-blown war. The Brothers' War. If I remember correctly, the tale goes that the brothers, unknown to their divorced parents, meet at a summer camp. Products of single parent households, they switch places (surprise!) so as to meet the parent they never knew, and then contrive to reunite them. I might have that story confused with something else.

While Urza, his millionaire-playboy brother, was dabbling in real estate, developing fashionable eye-wear, and chilling in a hot tub, Mishra was hard at work maintaining the family business. The younger, blonder Urza, full of rage and guilt, and jealous of all the attention given to Mishra, could often be seen exclaiming exasperatedly, “Mishra, Mishra, Mishra!” It's been a long time, but today we finally get to see the man in the flesh. Which one of the brothers am I going to preview? More importantly, which one will win the affections of Sabrina? The answer is but .

You might recognize him from such widgets as the Time Spiral Orb of Insight. The guy keeps himself in shape, that's for sure. Probably been working out at Mishra's Gym. As a 4/4 for four mana, he's already above-average (especially for a U/B/R creature). But it's the ability that'll make your jaw drop. (Note: If your jaw actually dropped, consult a physician.)

So you're saying that whenever I play an artifact spell, I get a second one, of equal or lesser value, for just half price? Nay, for free? You've got to be kidding me! And it doesn't matter where the other spell is? Basically, as long as it's not in the Removed-from-Game Zone, I can search for it and put it directly into play?

Now the question becomes, what can we do with the Dominarian industrialist?

While almost every card gets better in multiples (two Junktrollers are better than one, for example), there are some cards that truly beg to be doubled up. Take, for example, the various hand-size punishers from Magic's history. Sure, one Skullcage is awesome, but two is awesomer. The same goes for Viseling, Ebony Owl Netsuke, and Iron Maiden. To keep your opponent's hand full, why not try Howling Mine? It too is an artifact that gets better in multiples. Conversely, you could use the Mine in conjunction with Ivory Tower and Ivory Crane Netsuke to start gaining a ton of life.

Basically, Mishra is great with just about any artifact. There are some exceptions, of course. The Sunburst cards, like Clearwater Goblet, aren't all that hot. The one you play from your hand will be fine, but the second one - the one you pull out of your library, hand, or graveyard - will come into play with zero counters on it, since you didn't actually spend any mana on it. I'm also going to keep Mishra away from Psychogenic Probe. It just brings back too many painful shuffling memories.

Here's a brief look at a few things you can do with Mishra, Artificer Prodigy: 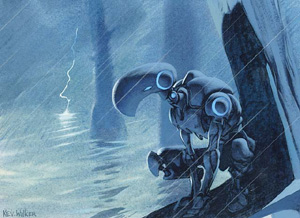 One of the primary uses for artifacts in the modern age is mana production. With Mishra's prodigious talent for artificing, you can quickly ramp up your mana with Signets, Talismans, Diamonds, Fellwar Stones, Star Compass, the Invasion Cameos, the Selecting 10th Edition competitors Mind Stone and Guardian Idol, Honor-Worn Shaku, the mana Myrs from Mirrodin Block, Gilded Lotus, and others. Note that the two-mana artifacts that don't come into play tapped can be chained. When you pay for your two-mana Talisman of Dominance, you'll get a second one courtesy of Mishra. You just spent two mana, and now you can tap those Talismans to get that two mana back. You can basically play out all the Talismans, Fellwar Stones, and Mind Stones in your hand for a measly two mana.

In a similar vein, there are a number of artifacts that reduce the cost of your spells. Just about every class of spells has a cost-reducer, including Arcane and Spirit spells (Long-Forgotten Gohei), spells of a specific colour (the Tempest Medallions), spells of multiple colours (Urza's Filter), Flashback spells (Catalyst Stone), Morphs (Dream Chisel), creature spells of a specific type (Urza's Incubator), and spells that cost mana (Helm of Awakening). All of which get better in multiples.

Wayfarer's Bauble and Solemn Simulacrum are also nice mana accelerators, and who could forget about Blinkmoth Urn?

What could we do with all that mana? I don't know, how about …

Instead of ramping up your own mana, you could just as easily ramp down your opponent's mana. There are a number of cards that fit this theme. You can outright destroy land with Ark of Blight, Sundering Titan, and Smokestack, and then add salt to the wound with multiple copies of Dingus Egg. Smokestack, in particular, seems like it would work very well with Mishra, since his ability allows you to generate permanents at double the usual rate.

While your opponent is scuffling for mana, you can put the hurt on them in other ways. Sphere of Resistance and even Feroz's Ban put heavy taxes on all spells and creature spells, respectively. Your opponent will need to play out as much land as possible to keep pace with your taxing and/or land destruction, so why not punish him for that, too, with the thematic Ankh of Mishra?

With his ability to bring out creatures, two-by-two, Mishra is like a modern day Noah, but with artifact creatures and an Ark of Blight. Just about any set of artifact creatures will do, but there are a few that work particularly well in multiples. Darksteel's Modular creatures are one example (Arcbound Crusher will quickly get out of control when you get two artifacts for the price of one). The Chimeras from Visions are another.

Mishra, Artificer Prodigy seems like a boon to any artifact-based Tribal Wars deck. Chimeras would have to turn to the Asterisk Heard Round the World, Mistform Ultimus, in order to be legal in Classic Tribal Wars. Other artifact-heavy Tribes, like Golems and Myr, would not only double the number of creatures in play thanks to Mishra, but their “Lords” (Myr Matrix and Brass Herald) are also artifacts and certainly get better in multiples. Of course, there's always Coat of Arms as well. Here's a Myr tribal deck I cooked up. Genesis Chamber and Myr Matrix can produce a formidable army with formidable quickness. You ought to be able to break the symmetry of Genesis Chamber with Mishra, since you'd be getting two creatures every time you played one. Lodestone Myr and Arcbound Crusher (who isn't a Myr, but works well in the deck) will allow you to trample over opposing Myr tokens if that becomes a problem.

2 Clutch of the Undercity

One of the more recent cards that won't mind too much if it's played and replayed is Coldsnap's Jester's Scepter. It provides a roundabout way to counter spells, but the attractive thing about it, for me, is the fact that it also takes a chunk out of your opponent's library. Apparently, I'm not the only one who took a shine to that particular aspect of the card. A little while ago, Nate Cappallo sent me a nice looking deck that used the Scepter to deck people. He used Sculpting Steel and plenty of tutors to get more mileage out of the Scepter. I had been cooking up a similar deck, but with the addition of Saviors of Kamigawa's Blood Clock. Now you can return your Scepter during your upkeep and replay it every turn, eating up five cards each time. It just so happens that our man Mishra fits right in. He'll double your Scepters, double your fun. Blood Clock really works well with Mishra, too. With both cards on the table, every time you return an artifact and replay it, you'll get to take advantage of Mishra's tutoring ability.

To further the decking theme, I turned to Mesmeric Orb. Millstone might also be a good choice. The Orb is much faster and doesn't require any further mana, but it's possible that it will backfire on you. You aren't relying on it to do all the decking, though, so this is much less likely. You should be winning the library battle thanks to Jester's Scepter anyway. To give the deck some measure of control, I added some Duplicants (which are excellent with both Mishra and Blood Clock) and Icy Manipulators. One Icy is good, but three or four can be downright brutal, either blunting the opponent's offense or denying them mana.

We are the Champions, for a little while longer

With Time Spiral set to replace Champions of Kamigawa block in Standard very shortly, I thought I'd take a look at what Mishra, Artificer Prodigy offers the Spirit world. As I mention above, one of the great creature-enhancers and cost-reducers is Long-Forgotten Gohei. Dancing Scimitar is an artifact and a Spirit, so it's definitely in. Baku Altar and Jade Idol, meanwhile, have Spiritcraft abilities that allow you to make Spirits. The Altar makes 1/1 tokens while the Idol transforms into a 4/4 artifact creature. Long-Forgotten Gohei enhances them both, while reducing the cost of the spells that keep them going. For the Spirit and Arcane spells, I decided to use ones that can be played repeatedly, like Kiri-Onna and Death of a Thousand Stings. Kiri-Onna can be used to return itself, if need be, while Death of a Thousand Stings provides a nice Splice outlet for Glacial Ray and an alternate win condition. Both work much better when they're cost is reduced to around one mana.

4 Death of a Thousand Stings

That's it for this week. I've barely just scratched the surface, and I can't wait until Time Spiral hits Magic Online so I can start putting Mishra into decks. I'm not 100% certain, but I have a feeling that he can do ridiculous things with Sensei's Divining Top. All that shuffling!

Until next time, wake up and smell the ol' (Mishra's) Factory!