Caught in the Mirari's Wake, Part 2 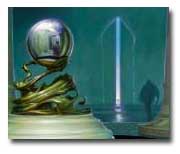 Welcome back to our behind-the-scenes look at the Odyssey Cycle author summit. In part one, I discussed the break from the old Weatherlight storyline and the brainstorming session that created Laquatus, Kamahl, and the Mirari plotline. In this article, I will go into greater detail about how we landed on Otaria, where the political factions on the continent came from, and why there are avens flying over the plains.

I've seen a lot of talk on the various Magic: The Gathering story boards on the Internet about Otaria. Some people believe it is a new continent and that it might have been formed either during or after the Phyrexian war. Others say it's not even on Dominaria. Well, let me set the record straight. Otaria is an Australia-sized continent in an overlooked corner of Dominaria. It has been on the Dominarian globe since Pete Venters (one of the first story gurus at Wizards of the Coast) created the globe. (The globe is sequestered deep in the bowels of the Renton offices.)

According to Scott McGough (story guru at the time of the Odyssey Cycle summit and author of Chainer's Torment), "The great thing about Dominaria is that it's much larger than Earth, and it has so many remote/unexplored areas that Wizards still hasn't discovered more than a quarter of the civilizations and societies." Otaria is one of those undiscovered countries . . . er . . . continents. None of the participants of the summit have access to that globe anymore (we've all moved on from our Wizards' jobs), but Daneen McDermott (then continuity manager for Magic) remembers that the continent that would become Otaria was nestled somewhere in the ocean east of Shiv (or where Shiv used to be) and west of the remnants of Terisiare.

So, we basically had a clean slate to play with -- an existing continent on the main world of the Magic multiverse that no one had ever heard of and about which no information had ever been printed. We were playing gods with the world and could populate Otaria with anything we wanted. (Well, within reason -- we still had to get the brand team and R&D to buy off on our godly proclamations.)

I discussed in part one how we decided to follow the Mirari around the color wheel in the plot of the Odyssey Cycle trilogy. This also colored our decisions about the geography of the continent. Rob King (prolific Magic author and a participant at the author summit) recalls one defining moment: "I remember Vance standing at the white board, outlining two color wheels on the continent with black in the middle and white on both the top and on the bottom."

So, we ended up with swampy areas surrounding two Cabal cities in the middle sections of this new continent and then followed the color wheel around to the top, placing a range of mountains to the northwest that ran north to south along the western coast. Past the mountains (and around the color wheel), you find the huge Krosan forest, which borders the large northern plains dominated by the Order at the northern edge of the continent. The only thing left, of course, is blue, giving us an eastern coast dotted with ports and the two major seats of power for the underwater empire off the coast and beneath the waves. The southern Cabal city of Aphetto and the southern court of Llawan actually begins a second color wheel for the southern half of Otaria, but the rest of that section sees no action in the current story.

Vance Moore (author of Odyssey) had this to say about the creation of Otaria: "The journey of the Mirari and the shift from color to color drove geography. We needed to keep blue and black powerful enough to be threats or allies throughout the series. We had their focuses of power shift south to show change. The shift in white was more in the hearts of the Order than geographic."

But what about those political entities? Where did they come from? Most of them sprang from the minds of Jess Lebow, Magic novel editor, and Scott McGough in their creative brief for the cycle. The authors really just ran with what the two gurus concocted. Here's how Scott remembers it: "The politics and agenda for each faction came first from the creative brief (I did black, green, and white; Jess did blue, red, and artifacts). I really liked the organized crime versus fascistic moralist army, and I positioned the green faction as wild and not politically organized because it made sense that green would retreat into itself after the Invasion and all that toxic black/artifact stuff."

Jess agrees with Scott's assessment: "Scott definitely brought the organized crime element to the table, and the green aspect was something we'd been working on for awhile; a way to give nature a little more teeth." For blue, Jess came up with an underwater empire of merfolk who wanted to take over the continent by sinking it beneath the sea. Even the champion of blue, an ambassador who is "very charming and convincing" but has "a separate agenda," was outlined by Jess. Red is characterized in the document as having a "very loose" structure, with "small, independent groups." Interestingly, red shows no champion in the document and barbarians are just one of a multitude of listed races (and last, at that).

Really, what the authors brought out at the summit was the need for two seats of power in both the mer empire and the Cabal. These allowed for that shift of power that Vance mentioned and, in the case of the empress, a new player in the power struggle that seemed to surround Laquatus at every turn. Vance states: "Blue was overwhelmingly powerful, but Laquatus needed some limitations. Also the ambassador was such a destructive person that only a court full of deceit and treachery really made sense. The merman plots and kills for fun, and he destabilizes whatever he is around.

Of Avens and Dwarves

The other part of Otarian life that was left more or less up to the author summit was the racial mix of the population. The discussion surrounding what types of creatures should appear in the various factions took up the better part of a day, as I remember. It was lively and exciting as species were born, evolved, and often died out over the course of minutes or hours.

One thing we all agreed upon was that it was time to give some of the old staple races a break. Every Magic set for years had included elves and goblins. We had a brand new continent to explore, and we felt it was time to let some of the other races get a chance to roam Dominaria again. Daneen and I had just recently finished "The Lady of the Mountain," our short story for The Myths of Magic anthology, which detailed the dwarven creation myth. We lobbied hard for dwarves to replace goblins, at least for the time being. (My belief is that the Pardic dwarves have all but obliterated the pesky little buggers.)

But the most interesting brainstorming discussion surrounded the flying creatures that Vance wanted to use for the Order in his Odyssey plotline. "The aven were a natural development for a white race," says Vance. "Birds to me are either doves or vultures. The idea of races cast out of higher planes with many unable to fly was engaging. Also, since I have a phobia about large birds (tracing back to a chicken incident), I use them quite often." We all liked the idea of militant, bird men terrorizing the plains, but we knew we needed to stay away from Flying Men, which was a blue card from the Arabian Nights set. Vance's more birdlike avens were perfect because white flyers are often raptors of one sort or another.

The nantuko were Scott's idea. Although the name came much later (from the R&D naming team, I believe), Scott remembers that he "had just seen a nature program (a great source of ideas for Magic during my tenure as story guy) that defined mantises as the ultimate insect: They fly, they hop, they're apex predators, and so on." The mantises fit the bill called for in the creative brief for a slightly more aggressive, less humanoid race to rule the forest. I remember thinking how great these guys would be at guerilla warfare in the dark recesses of the Krosan forest, and I loved the idea because I planned to make Kamahl's trip into the heart of the forest in Judgment an homage to Martin Sheen's trip in Apocalypse Now.

We now had avens (bird men), dwarves, nantuko (mantises), mer (later changed to Cephalids by R&D as they got into the spirit of new races), and the human dementists in the Cabal, which was another Scott creation, I believe, spurred by some of the details we got from R&D at the summit. What we didn't have was a race for our hero. We had thought for a while of using the Keldons, because Scott loves to write about Keldons. But we were trying to make a clean break from the previous storyline, so we needed something different, but still primal, powerful, and barbaric.

But we didn't want to use plain, old, ordinary barbarians. Let's face it, Conan is the epitome of the barbarian hero and you can't use barbarians without drawing comparisons. Scott came to the rescue. "What if we made them like Doc Savage?" he asked during the summit. "Not actually metal, but bronze-skinned?" For the rest of the summit (and even into my first draft of Judgment), we all called them the "brasskin" barbarians. That name was excised at some point, but they remain a brassy-skinned race of nomadic barbarians -- perhaps distant cousins of the Keldons, but I doubt we'll ever know.

So, by the end of the summit, we had a plot and a populated world. All we needed to finish up this three-day brainstorming session was a set of characters to carry this new story forward and make their mark in our undiscovered continent. Next time, I will discuss the creation of the cast of characters, which began at the summit, but continued on right through the writing of Judgment.

If you missed the first article in this four-part series, read Part One: Breaking with Tradition right now!

Send comments and questions to editor@wizards.com.