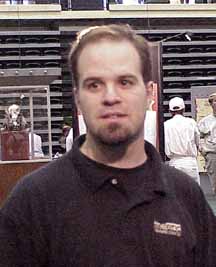 Michael Long is a controversial player. Over the course of the years, he has gained a reputation that few players can match. Stories are told about him and for example the infamous Cadaverous Bloom on his chair, and he was recently disqualified from the US Draft Challenge at the U.S. Nationals. Still, most of what you hear about him are rumours or fractions told by someone else. What is Michael's own side of the story?

"I started playing professionally when I was 19 years old, and I was a different person than I am now. I was very competitive and secretive towards people outside my narrow playtest group. I acted like a jackass, and people responded accordingly. So my reputation has a fair amount of validity," Michael Long says, not at all denying the fact that he has done some stupid things in his career.

"I was a very angry person, and my attitude towards Magic reflected that," Michael says and refers to such instances as fighting with the judges. "If there were rulings or things I didn't like or things that confused me, then I would sure as hell make them know about it," he says, admitting that he made more enemies than friends during that period of time. He denies being calculating, though. "If I was calculating, then I would have a good reputation. I will rather say what's on my mind. It works out better for me that way," he says.

Michael appears to be a pretty intelligent guy with a charisma that many people could envy, so there are no reasons to believe he would be lying. In fact he seems very open about these things. He knows he intimidates people, but doesn't really understand why as he feels that he is very friendly. And although the disqualification he received during the US Draft Challenge made him frustrated, although he feels that the penalty was really tough and although he wish that they hadn't come down so hard on him, he understands why they did. "I think Wizards of the Coast definitely wanted to make a statement, and the penalty was very, very accurate. They expected me to give my best game, and I came with a D minus game. I've done that in the past, and it is not acceptable."

When asked about what happened in the Masters, Long can only say that he let his guard down after playing six tough rounds of swiss, fighting his way into the top 8 of the U.S. Nationals. He drafted an amazing deck, he barely beat Kyle Rose in the first round and after the two Virginia residents decided to do a split of the money, Michael tried to relax. "I guess I really didn't randomize my deck sufficiently. Given the way people are leery with me, I wasn't as careful as I could have been, and I didn't make people feel as comfortable as I could," he says.

Because when Michael Long plays Magic, people are watching him. "I appreciate that. Many people are really kind, they come up to me, say hi, can you sign my Rootwater Thief, I like the way you play and so on. I think a lot of people respect me as a player, and I appreciate that. The way they treat me make my matches enjoyable," he says.

Enjoyment is actually a very important part of the game according to Michael. He plays a lot with his girlfriend, many a time they draft one on one using cards that are rarely used in tournaments, for instance Portal. In addition, Michael plays at the store he owns. He has an elementary league there - four of the members qualified for the Junior Super Series - and sometimes Kyle Rose and Donnie Gallitz drops in. "I want the quality of play to remain high, but I only have so many hours to devote to Magic. So I spent time playing with friends and drafting rather than keeping in touch with the world of Magic," he says. For that reason, he skipped both last year's Worlds and Pro Tour London - not because he doesn't care, but because he has other things that are important to him as well.

So there we are, one of the reasons why there will always be myths spun around Michael Long. He isn't part of the "hip" Magic environment who come together on IRC to chat. He is vocal, but rarely gives comments about stuff as he may be hard to get in touch with. If you do, though, you may find that he is both wise and witty. For instance when he talks about the nationals. "It's amazing, the best tournament, and the people who are good always get better. This was Kyle Rose's second top 8, my fourth and Jon Finkel's third. The young bastard is chasing me down. It's not good enough for him being better than me in the pro circuits, he won't even let me have this," he jokes - even though there is some truth to it; Michael is ambitious and really wanted to be the national champion or at least to make the team.

Even when confronted with the infamous Cadaverous Bloom incident, Michael has a funny response. "I couldn't tell you what happened. I was sitting on it [the card], what should I do? Hop up and pop it into my hand? I think it would be enjoyable to go back and take a look at the footage to find out what really happened," he thinks. Michael has no excuses. He does not want to apologize for who he is. "I am, and I take responsibility for that," he claims before heading home to drift into the fog of myths yet again.