ere in R&D, we design many Magic cards—far more than we print. A small 145 Magic expansion typically goes through more than 10 times that many card designs before the final 145 cards end up in your hands. One way we think up Magic cards is called "top-down design," which is the theme week this week. To better describe just what top-down design is, it's imperative to know exactly what composes a Magic card. After all, you can't bake a loaf of bread without first knowing all the necessary ingredients.

The mechanical parts of a Magic card are: 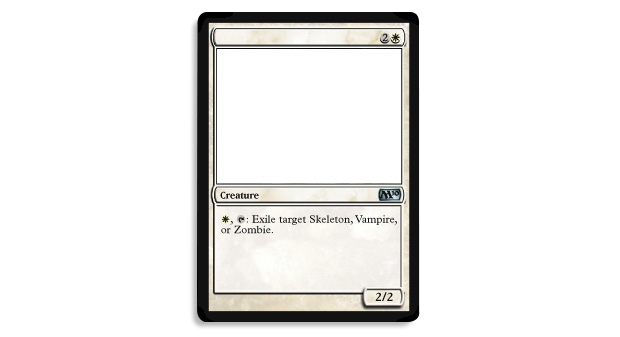 These elements directly affect the game play of the cards. They rest primarily in the hands of designers and developers. These are the more "mathy," "crunchy," or "sciencey" elements of a Magic card.

The flavorful parts of a Magic card are: 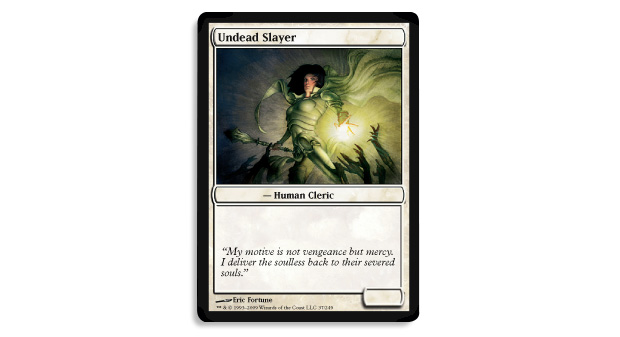 These elements directly affect the look and feel of the cards. They rest primarily in the hands of artists, illustrators, and writers. These are the more "artsy," "fluffy," or "creative" elements of a Magic card. 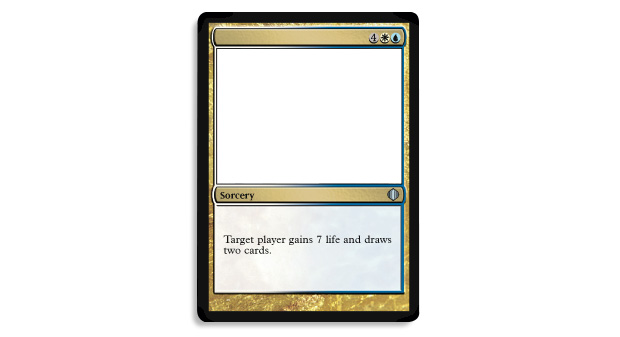 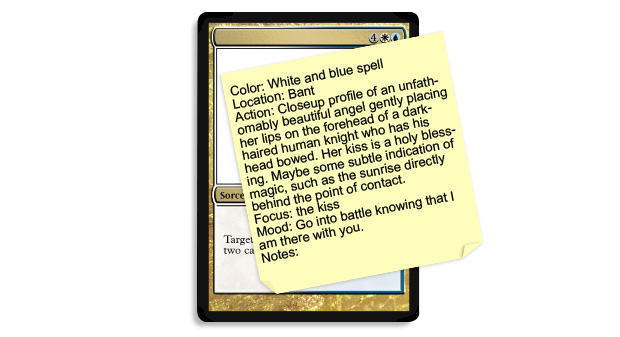 Color: White and blue spell
Location: Bant
Action: Closeup profile of an unfathomably beautiful angel gently placing her lips on the forehead of a dark-haired human knight who has his head bowed. Her kiss is a holy blessing. Maybe some subtle indication of magic, such as the sunrise directly behind the point of contact.
Focus: the kiss
Mood: Go into battle knowing that I am there with you.
Notes: 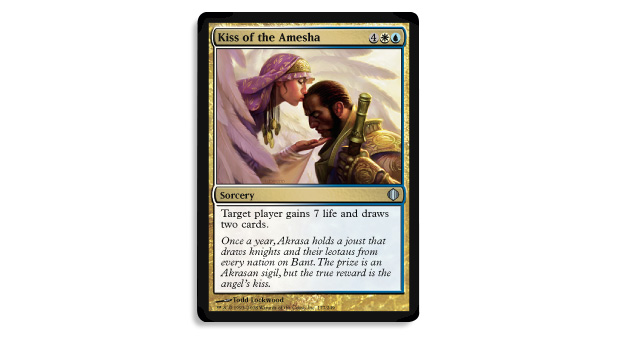 Card design is fabricating the elements of a previously nonexistent Magic card from nothingness. Since a Magic card is composed of discrete parts, some of those parts are filled in before the others. Filling in the mechanical parts before the flavorful parts yields what we call "mechanics-driven design" or "bottom-up design," while the flip side is called "flavor-driven design" or "top-down design."

Mechanics-driven design is how the majority of Magic cards begin. Oftentimes they are important for serving specific game play needs.

For example, a card with the rules text "destroy target artifact" keeps artifacts from being invincible, which increases Magic's strategic depth. Cutting a Shatter-type effect from a set is likely to open a game play void that must be bandaged up elsewhere in the set. There are a slew of such needs required to ensure core Magic game play, which commandeers many of a set's card slots for bottom-up cards.

Another large reason for bottom-up cards is "interesting" (but not "essential") game play.

I could go on all day here, but the important topic today is the contrast to this: flavor-driven design.

Magic 2010 has taken some of this to heart. Purely mechanical cards are still present for core Magic game play, but most new designs have significant top-down elements. 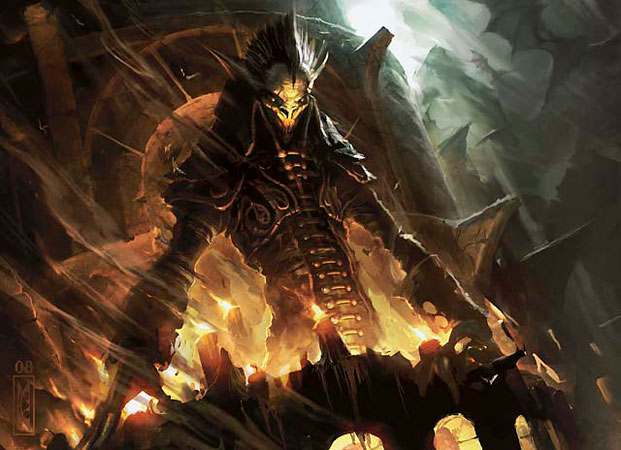 I described a Magic 2010 card design to Latest Developments columnist Tom LaPille as "It's a lord of the Vampires. It makes all your vampires stronger and take to the skies when it's nighttime." Tom blinked and replied, "I don't understand. Recite game text, please." That apparently was a clashing of flavor vs. mechanics in communication form.

A notable aspect of top-down cards is that they effectively reduces the cost of words on the cards. We pay close attention to the raw word counts of our cards so that Magic game play isn't bogged down by incessant unfun reading. Top-down cards often cost extra words to communicate their flavor, but since "Vampires are stronger at night" is common sense for nearly any fantasy reader, this vampire's 33 words is easier to remember than a typical 33 words of random Magic text. What are those 33 words? You'll find out soon.

A Mixture of Both

Many cards fall somewhere between flavor and mechanics-driven. These cards are humming both mechanical and flavorful notes:

Doran, the Siege Tower is a "lord of Treefolk" that tilts gameplay in an enjoyable way for many players. Boggart Arsonists does a twisted version of the Lorywn Boggart Loggers shtick, but for Shadowmoor. Ashling the Pilgrim is part of a vertical cycle of "third time's the charm" activators alongside Soulbright Flamekin and Inner-Flame Igniter, but her leveling-up into an "Ashling Explosion" has roots in the Lorwyn novel.

From my experience, these kinds of cards have the highest probability of becoming the most widespread, appealing cards in a Magic set. They have something for everyone to enjoy. This widespread appeal applies not just to players—designers, developers, and creative artists inside R&D are also victims of "falling in love" with Magic cards just like you are.

Often, the main thing that protects a Magic card from changing or being cut from a set entirely is the fervent defense of R&D members. These mechanical / flavorful hybrid designs naturally have more defenders and thusly a high survival rate. It gets to the point that if a developer argues "we need a common red Shatter—Boggart Arsonists needs to kill non-Scarecrow artifacts too!", we instead dedicate another slot to Smash to Smithereens so we can keep Boggart Arsonists as we love them.

And I argue that if R&D weren't occasionally love-struck by our own cards, we'd be doing something wrong, and Magic would have lost some of its humanity.

Here's a recent example of an elaborate payoff where all of R&D got their fingers in the cookie jar. 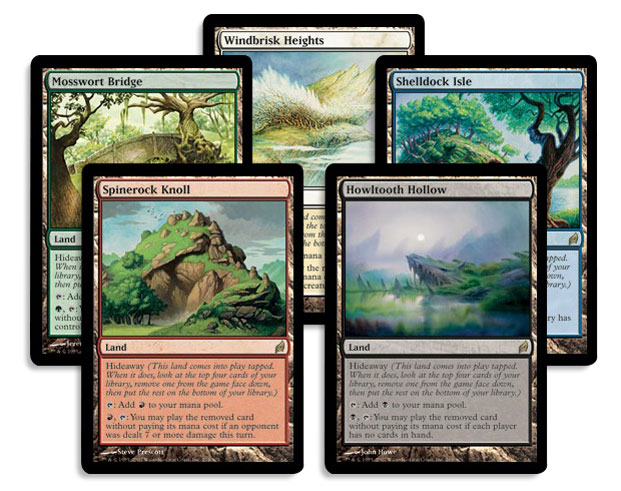 Mosswort Bridge and friends are an Aaron Forsythe top-down swing at a "Treasure" land cycle, where players can find a pot of gold after following the rainbow. The "Treasure" mechanic was more prominent during Lorwyn design but made it to print only as five cards with the hideaway keyword. Incidentally, a mechanic named "treasure" is about as lovable as a mechanic can be, and Mosswort Bridge is my favorite card in Lorwyn (high praise for a set that also has Primal Command, Cloudthresher, and Doran, the Siege Tower).

Concepting and illustrators flavored these cards as "hibernating monsters" that planted seeds for a payoff in Shadowmoor when the monsters wake up. 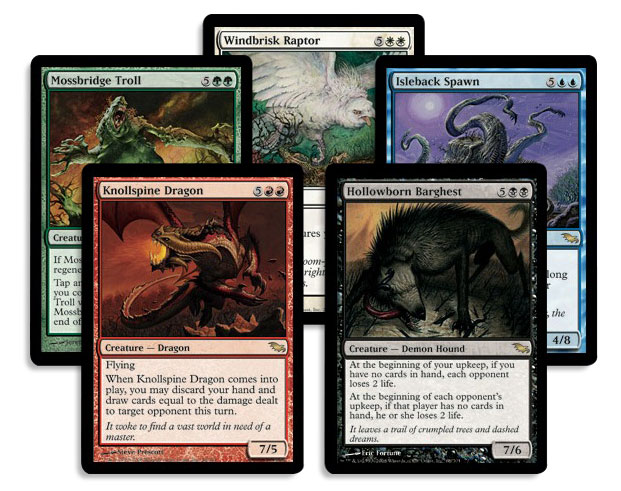 Mossbridge Troll and friends are a Ken Nagle mechanics-driven swing at cleverness, where players are rewarded for physically putting the card Mossbridge Troll underneath the card Mosswort Bridge. We originally tried other mechanical gimmicks for this cycle, but we wanted to reward players for putting each pair of cards in the same deck. That's why these huge fatties have on/off switches in the same vein as their respective Hideaway land.

The important thing to take away from these ten cards is that any individual one is quite strange all by its lonesome, but ten strange individuals together become a lovable strangeness. It's like The Addams Family or something.

"Top-down" goes deeper into Magic than you probably realize. For example, here's what a computer might name the zones of Magic:

Computers are only concerned with unambiguous, efficient, searchable nomenclature.

These names make sense for communicating the function of the zones. A new player has a decent chance of deciphering each zone's purpose from the name alone. They are, however, not as flavorful as they could be. When mechanical cards read like "Put the top card from Community Chest onto the bottom of Chance," the game starts to feel like a pile-shuffling algorithm.

Here are the names for Magic's zones as of Magic 2010:

These names evoke more planeswalker-battling-planeswalker flavor. Using these names makes our cards read more like magical spells in a fantasy world. Cards as a whole are more evocative and appealing.

You probably noticed that "hand" has kept its mechanical name instead of becoming something like "mind" or "spellbook." This is because flavorful names sometimes have the downside of adding unfamiliar words to the game—a downside we understand and consider when we make cards, mechanics, and bigger changes.

We use term "resonance" to describe a top-down concept that the majority of Magic players will recognize from reality or in other media. This includes Angels, Demons, Dragons, Zombies, Vampires, and a few things Magic hasn't done in a while.

For a counter-example, here is a top-down card for a trumpet that plays a troop-inspiring anthem:

Everyone understands the concept of a trumpeter's battle anthem inspiring troops to fight. However, only actual musicians (and only some of them) know that playing the trumpet builds up saliva inside the bore that eventually stops airflow through the horn. Trumpets have spit valves to relieve saliva.

While a Magic card depicting a trumpet with a functional spit valve is top-down, it is not resonant.

I'm reminded of stepping off the Magic Cruise into Cozumel, Mexico. I was greeting by a tan, portly native with a sombrero next to a mariachi band playing the "Mexican Hat Dance," and I ate at "The Three Amigos" restuarant. This was a caricature of Mexico, but the important business-savvy distinction is that it's what American tourists vacationing Mexico expect and want to see. My experience at Pro Tour–Honolulu 2009 was a bit similar since I've never been to Hawaii. It's exactly as you'd expect: beautiful and tropical, with leis, coconuts, alohas, everything that screams "Hawaii."

Resonance was a strong influence on individual card design for Magic 2010. Whenever we found obvious fantasy notes to hit, we hit them. A resonant concept's flavor should reverberate inside players whether they're new players or super-hardcore veterans. 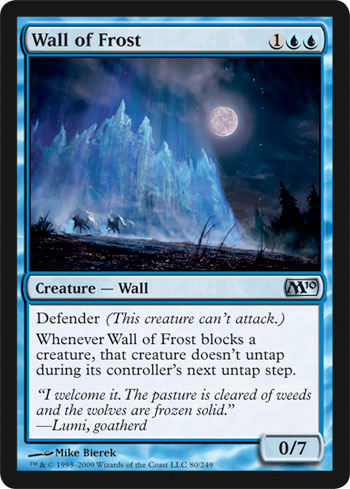 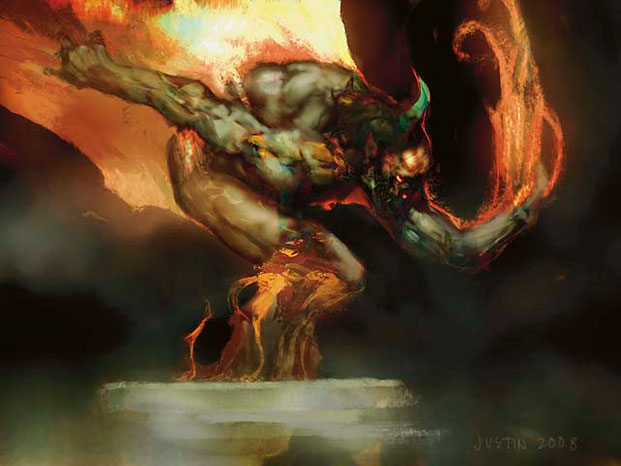