We had just finished up the creative development work behind the Legions and Scourge expansions and were about to get started on development for the “Bacon” block. We had learned from the Onslaught block just how far you could exaggerate a creature before it became unrecognizable—this was to prove invaluable for the work to come. I also knew that R&D wanted to create a block that really hit big on artifacts. Brady Dommermuth (our creative director) came to me with the idea of exploring a metal plane. We already had a metal plane that Karn created in our backstory. So, what if this plane had started to change? What if things were getting a little strange? Instead of a perfect plane, what if something had come to this planet and brought some chaos with it? Now that just might be a great new world for the Magic game!

The first few ideas to be thrown around were that we should create a place with a topography that was very similar to Earth’s, but instead of being organic it would be made of metal. Then some people said we should have the same organic elves and goblins as in every other set, and that they would have to adapt to this new metal plane. I didn’t like any of these ideas. I went over to Matt Wilson’s desk (our lead concept artist at the time) to talk it over. We talked about past settings we liked which had really strong visuals, like The Dark, Ice Age and Mirage sets. I said, “What if we forget about everything we know about Earth and just let races evolve however they like on Mirrodin? Humans on Earth grow lots of weird stuff like bones, teeth, hair, and fingernails. What if on this plane their body chemistry also allows them to grow metal anatomy? What if when an elf gets scared its outer layer of skin hardens into metal? A kind of fight-or-flight response.” Matt added, “What if the dragons don’t need wings on this planet because they grow turbine engines out of their armpits?” I remember thinking, “Wow! That’s really crazy! I like it!”

I would need to recruit a crack commando team of creative concept artists to pull this off. I had some early brainstorming sketches done by Carl Critchlow, John Avon, Vance Kovacs, Brian Snoddy, and Mark Tedin. I needed to get serious, so I brought some of the artists to the Wizards’ headquarters to work day and night in our drawing dungeon, called “Siberia”. I flew Greg Staples in from Sheffield, England, to work with Matt on creature and character development. Then I recruited some local heavy hitters (Todd Lockwood, Mark Tedin, and Sam Wood) to work on everything else, like the landscapes, artifacts, and weapons. Now the team was complete. 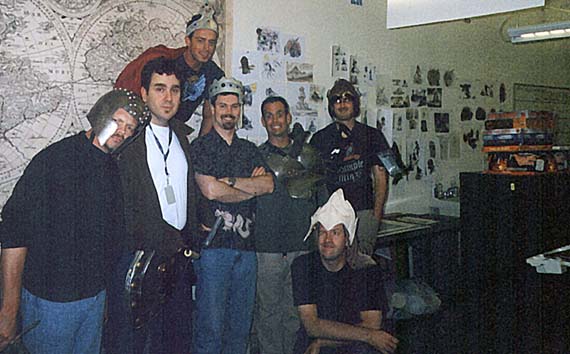 We were happy with the preliminary look of all of the landscapes, except the swamps. We realized black needed some work. 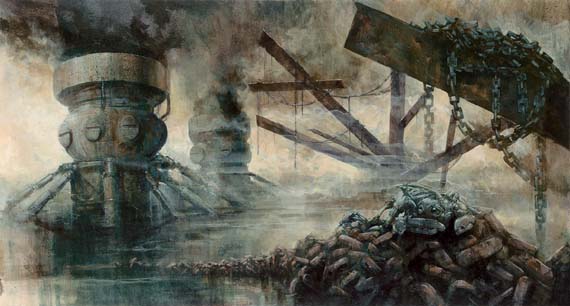 You can see that this first concept by Carl Critchlow, while very beautiful, looks too industrial. The color pallet of browns and blacks is too expected. We wanted to try and get some bright-green color in to represent the corrosive necrogen mist that devours everything living in the Mephidross Swamp. I had this idea that the necrogen could bubble out of the ground, like lava does in the Pacific. I wanted to see bubbling sores on the metal plane’s surface that built up as the necrogen oozed out. Mark Tedin went to work, and by his third sketch he had something we could use. 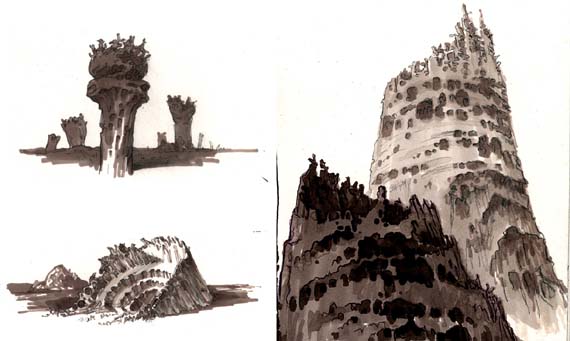 Now we had to see if we could add the bright-green color to the necrogen and have it still look believable as a swamp. With a quick splash of green watercolor we had our answer. 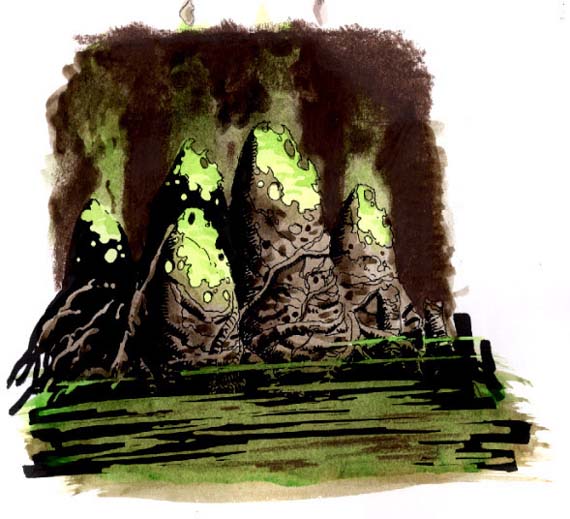 I loved the new look and Mark worked up the first concept for the Vault of Whispers. 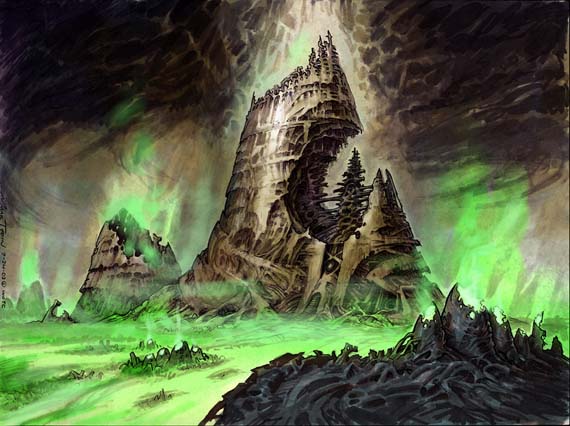 With the new swamp locations looking good, I wanted to check in on Greg, who was working on Mirrodin’s Nim zombies. The first sketches were the typical slow zombie wandering around looking for brains. Brady and I decided that we wanted mean, fast zombies for Mirrodin. I wanted to see zombies that Carl Lewis couldn’t outrun if he tried. I wanted mean creatures that ran on all fours, so Greg came up with another sketch. 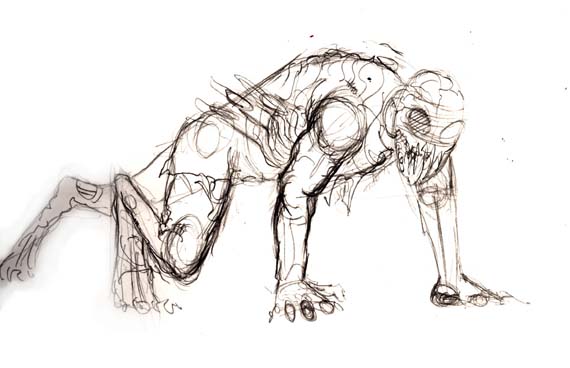 Well, this was a little better. He was on all fours but he still looked too slow. It looked like he might crawl after you, but not very fast. Then Greg decided to work on a motion sketch to see how this zombie might move. 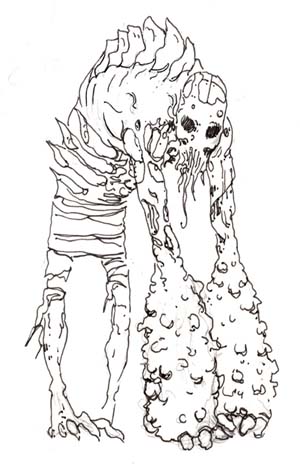 This one was close. I loved the idea that these creatures were so saturated with necrogen that they grew metal exhaust vents out of their sides to vent themselves. It also made them look like hotrods, which was a nice subtle nod to speed. We decided that the necrogen mist would eventually eat out everyone’s eyes, so I wanted him to remove the Nim zombie’s eyes and replace them with a metal skull plate, and I also wanted him to change the arms. I wanted him to be able to slash and tear at his victims, and those arms were just too big and clumsy for that. 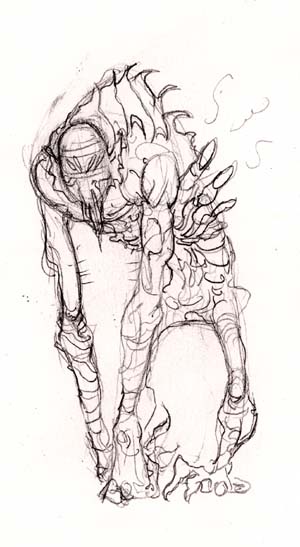 Finally we ended up with a figure we liked for Mirrodin’s Nim zombies. I had him add some color and we were done. 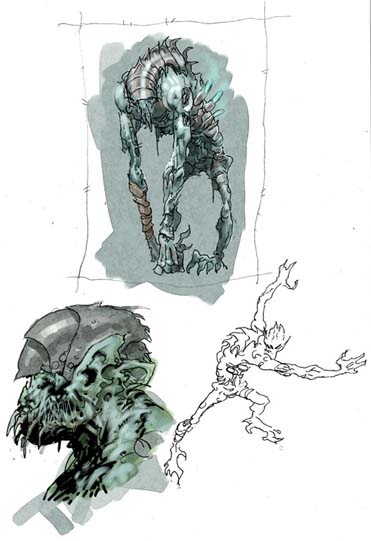 The last question I needed answering was what would happen if a human decided to try and live in the Mephidross Swamp. Well, ultimately the necrogen would burn out their eyes and slowly convert them into a horrible Nim zombie. This was the transmutation I wanted to see—a poor naive human slowly poisoned by the necrogen. Not fully human and not fully Nim. Matt did a quick color sketch and added a nice touch by adding metal scabs where the human’s skin had rotted away. In the final sketch he added small, metal, worm-like parasites that ate away the human’s insides, leaving him with just a belly full of necrogen. 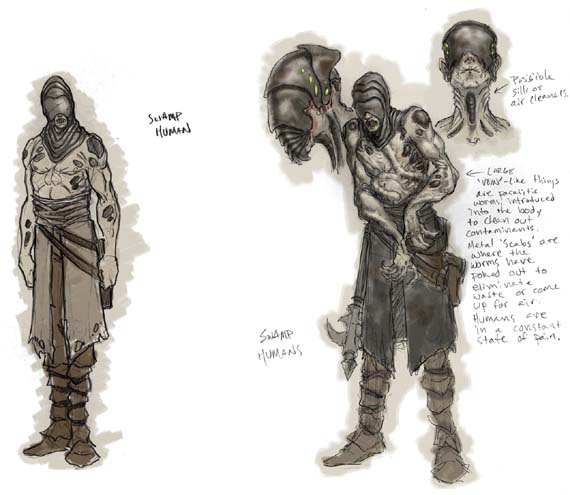 At this point I felt we had accomplished our goal as the creative team for envisioning a new and original look for Mirrodin's Mephidross Swamp and the creatures that try and live there. I hope you think so too.