again to Swap Week! This week I get to put on my Vorthos hat, rattle my saber, twirl my thin mustache, and rally the spirits of all you Magic-flavour Musketeers. How will I do this, you ask? I have to confess that I was completely stumped. What do I know about Magic flavour? If some of my email is to be believed, I can barely tell the different between flavour text and rules text. Unlike regular Taste the Magic columnist Matt Cavotta, I'm not a first-name basis with any gods, or cult members, or dragons.

Luckily for me, with little time to spare, I found the following email in my inbox:

My name is Kharlamov. You might think that I'm a Russian hockey player, but in fact I am one of Ravnica's non-essential and baggage-free characters. I could die tomorrow and the storyline would not be affected one whit. Very convenient, no? You must be very happy that I wrote this letter to you. I am a Ravnican grocer, or barkeep, or something like that. Go ahead and make something up, if it'll make me sound more interesting. Basically, I'm one of the people that you meet when you're walking down the street.

By night, I'm a member of an underground bare-knuckle art appreciation society called Art Club. It's so secretive, it makes the Dimir look like Paris Hilton. You won't even hear about it from the Ravnica cycle of novels by Cory J. Herndon. There are many rules to this club, most of which involve not talking about it. The leader of the club was very emphatic about that. He didn't say that we couldn't write about it, however, so now I'm passing this information along to you and the entire magicthegathering.com audience.

What do we do in Art Club? Well, when we're not wearing black turtlenecks, eating cheese and wine, and saying foreign-sounding words like chiaroscuro, decoupage, and cinema verite, we pit Magic cards with multiple illustrations against one another in a battle for supremacy in the Deadly Arena of Death! (Note: Now with 50% more death.) As you can imagine, since these cards are inanimate objects, not much happens. Until we use our imaginations! After all, the human imagination is the most powerful force in the world. Except for gravity. Gravity's pretty powerful, too.

Round 1: Unnecessary Use of Force 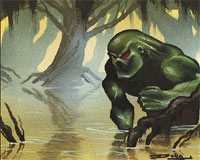 There is always a lot of talk about how Craw Wurm is the creature that captures the eye of the new player, but those of us who were lucky enough to open a Force of Nature know that there is no comparison. In his three-point stance on the line of scrimmage like a cross between the Predator and The Incredible Hulk, this version of Force of Nature means business. And not a business like selling ice cream cones to children. This guy is built like a stone-masoned outdoor lavatory. He looks like he beats up Shivan Dragons for their lunch money. 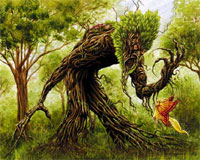 Somehow, this version isn't quite as menacing. Perhaps due to the ambiguity surrounding the creature-type (What's a “Force”?), the 5th Edition Force of Nature ended up looking unmistakably like a Treefolk. A very crotchety old Treefolk with an uncanny resemblance to PBS's painting guru Bob Ross. I am not a happy little shrub! He doesn't yell at you to get off his lawn … he is the lawn!

By far the darkest of all the illustrations, the latest incarnation of Force of Nature combines the air of menace of the Alpha version with the tree-based anatomy of the 5th Edition version. If you go out in the woods today, you're in for an 8/8 trampling surprise.

Winner: Nostalgia wins out and the award goes to the Alpha version by Douglas Shuler.

Round 2: A Hard Rain's Gonna Fall 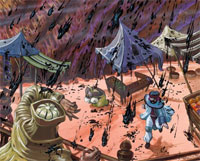 This illustration depicts what appears to be a market, or some other kind of encampment, being bombarded with globs of black goo while the inhabitants run for shelter. Of the three Rain of Tears illustrations, this is the busiest. There's a lot going on in that picture, and in some ways, I think you lose focus on what's really important: those blobs of black goo hurtling towards the Earth. 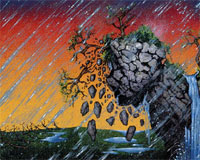 I really like the Tempest Rain of Tears. It's a very simple image: the Rain of Tears is eroding a cliff face. Using mostly primary colours, this one looks like a page out of a comic book. Bright blues, reds and oranges are not usually seen on Black cards, but I think they work in this case. 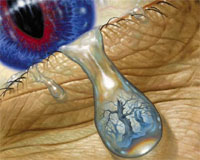 Wow. What. Outstanding. Work! This is one of the few land destruction spells that isn't represented literally by an image of land being destroyed (usually by a barrage of flaming rocks). The photorealistic eye, the tear reflecting the desolate landscape, and the implication that this Rain of Tears came after the land fell into decay and despair, combine to make this one of the most striking and unconventional illustrations for this type of spell.

Winner: Since it's perhaps my favourite Magic artwork of all time, I've gotta go with the Portal version by Eric Peterson.

Round 3: The Stone Rain Tournament of Champions

Rain of Tears, Stone Rain … the world of Magic: The Gathering sure has some strange precipitation. Can you imagine what it must be like for a Magic-land meteorologist? “Today's forecast is partly cloudy, with a 30% chance of Rain of Daggers. Don't leave the house without your titanium umbrella.” I mean, Rain of Blades, Hail of Arrows, Sleet of Spears? I hope the postmen in the Magic universe have a different motto. Or wear helmets. 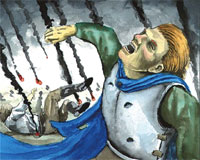 The original art, used from Alpha right up until 4th Edition, this version of Stone Rain focuses on a pair of poor saps who didn't dress appropriately. The thing about this piece is that Stone Rain is supposed to destroy land, not injure people (unless, of course, they suffer injuries during the destruction of the land). With 5th Edition, the focus was changed, depicting a castle instead of people being hit with Stone Rain. This is much more appropriate, in my mind. Save the flailing bodies and the anguished faces for the direct damage spells. 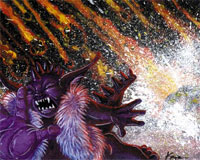 Again, the focus is on the human toll of the Stone Rain disaster and not the destruction of the land. At least we know that Stone Rain doesn't discriminate, causing both human beings and bipedal ankylosauri to flee from their homes. 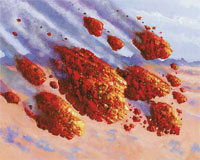 When it comes to representing the destruction of land via flaming stones from the sky, I think it is important to show the point of impact. Rocks flying through the sky with the greatest of ease just doesn't convey the devastation commonly wrought by a hail of boulders. Also, you lack the sense of scale you get, for example, in the Portal Second Age version. Are those boulders as big as houses or the size of bran muffins? 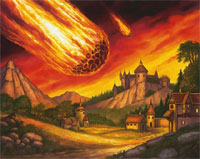 Here we go! More castles being destroyed. Or is that the same castle? Stone Rain castle: It burned down, fell over, sunk into the swamp, and then was showered with fiery chunks of granite. 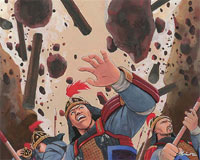 The most intimate of all the images, these rocks are not falling from the heavens, but instead are part of a booby trap. Like the Mercadian Masques version of Rain of Tears, this Stone Rain depicts a scene. Unlike the Masques card, it is much easier to figure out what's going on since the “main” character is centered and gives you something to focus on. Again, this version of Stone Rain seems like it would be more appropriate as a creature destruction spell.

The Eighth Edition Stone Rain, a reprint of the Portal version, heralded a paradigm shift within the Creative Team. Among the other changes brought in with Eighth (Naturalize over Disenchant, no more Counterspell), this one went unnoticed by many: Stone Rain no longer falls from left to right or straight down. It falls right to left. This is a permanent change, evidenced by the subsequent reprinting of this version in 9th Edition, as well as the Champions of Kamigawa version seen below. 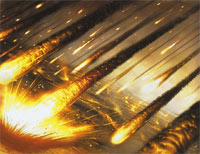 Wow! Now that's some Stone Rain! If the Portal Three Kingdoms version should come with a sign saying “Caution: Falling Rocks” this one is more like, “Caution: Lasers from Space.” When you see this artwork, you don't need to see a character running away or suffering burns and a concussion to get a sense of the damage this Stone Rain is causing. It's pretty darn obvious. You don't need a weatherman to tell you it's raining stones.

Winner: Hands down, Champions of Kamigawa version by Greg Staples.

I hope that gives you an idea of what goes on in our completely made up organization. Interestingly, my opinions line up perfectly with your own. Chalk it up to a coincidence, I guess.

P.S. Two weeks ago, you forgot about Mistform Ultimus.

Thanks, K. Well, I hope you enjoyed your time with me this week.

Until next time, don't ever change.