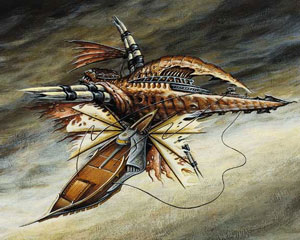 to Weatherlight Week! It's five years worth of story compressed into five days, kinda like the first half-decade of 24. On Monday, Mark Rosewater explained the Saga's genesis, outlining the origins of protagonist Gerrard "Rowdy Yates" Capashen and the rest of the crew of Serenity... I mean, the Skyship Weatherlight. On Tuesday, The Ferrett recalled some great multiplayer moments involving cards from the set. (I know I've been burned by an unexpected Spinning Darkness more than once. Yes, shame on me.) I'm assuming that Doug did something cool on Wednesday.

Now it's my turn. What's a deckbuilder to do, especially one like me? I wasn't around when Weatherlight came out. I mean, I was around, I had been born and all that, but I just wasn't playing Magic. Despite the fact that I was on a magical sabbatical when it was released, some of my favourite cards of all time come from this set: Liege of the Hollows, Llanowar Sentinels, Veteran Explorer, Mind Stone, Ophidian, and Spinning Darkness. I've already written about some of these cards. A surprising amount of Weatherlight cards were reprinted in Tenth Edition (thirteen by my count), and they've been trickling into the decks I've built for this column.

I guess I could look at some of the wackier cards in the set. In his old Single Card Strategies column, Adrian Sullivan dissected a few Weatherlight build-around-me's like Bösium Strip, Psychic Vortex, and, of course, Gaea's Blessing.

I could also look for combos based upon the personnel of the Skyship Weatherlight. Gerrard Capashen "combos" with Forced Fruition which "combos" with Rule of Law which combos with Ertai, Wizard Adept. I'm sure Hanna, Ship's Navigator could make it into such a deck, with some combination of Standstill, Seal of Removal, Compulsion, and my favourite Hanna combo card, Second Chance. If you were feeling particularly rogueish, if you wanted to taunt the mana gods, you could try to squeeze a copy of Multani, Maro-Sorcerer into the deck as well (I hear he likes Forced Fruition, especially in multiplayer).

Build My Own Standard!

Except I'm going to go even further. Rather than use the entire Mirage block, I'm going to restrict myself to Weatherlight cards. The second block I'm going to use is Lorwyn. The core set will be Tenth Edition, giving us a bit of card redundancy but whatever. It's my own Standard, dangit. Plus, I'll throw in some bonus combos because I like to bite off more than I can chew.

If you count Kithkin Armor as a Kithkin card, every major Lorwyn tribe except Faeries is represented in Weatherlight. Treefolk (Redwood Treefolk) and Giants (Cinder Giant) are barely represented, but Merfolk, Elves, Goblins, and Elementals have two or more members in the set. That's enough for me! Besides, there is plenty of non-tribal mechanical overlap between the two sets, as you will see. Let's kick things off with a turn-four 7/7:

Forget about Momentary Blink (or use it too!). Angelic Renewal, like Saffi Eriksdotter, allows you to double up on one of the evoke Elementals' comes-into-play abilities and end up with the creature in play. Unlike Saffi, Angelic Renewal is much easier on the mana, making Mulldrifter, Shriekmaw, and even Faultgrinder tricks more feasible.

A fixed Wood Elemental—which isn't saying much, admittedly—Fungus Elemental also benefits from you having untapped Forests when it comes into play. One easy way to ensure this is to use non-land mana sources like Smokebraider. Another possibility is to cheat old Fungi into play with Incandescent Soulstoke and pay only half the price.

The other green Elementals are interesting and combine favourably with Incandescent Soulstoke, with Barishi enjoying the end-of-turn sacrifice and Aboroth able to get a whack in while he's still a 9/9 because of the haste. Fervor allows you to double up on your haste effects, Soulbright Flamekin gives good trample to your green fatties, and the rest of the deck is made up of Flamekin Harbingers and a small toolbox of Elementals.

One class of card that I didn't mention when I previewed Rings of Brighthearth consists of cards that have the text "Play this ability only once each turn" written on them. You can get around this kind of drawback since Rings lets you copy activated abilities. They go right on the stack and aren't considered to be played. Of course, while you can pump your Avizoa up to a 6/6, you will have to skip two consecutive untap steps, since that little clause is part of the ability and not part of the cost (note the Oracle text).

Other notable Weatherlight cards to pair with Rings of Brighthearth include Llanowar Druid (I skip what step now?), Strands of Night, Serrated Biskelion, and even Orcish Settlers if you have roughly a bazillion mana.

This is obviously a Weatherlight-only combo, but there is a quasi-analogue to Haunting Misery in Tenth (Mortal Combat—they both allow you to win with twenty dudes in the grumper) and the Lorwyn evoke Elementals allow you to keep your creature-density high while still playing with "spells." Merfolk Traders, Ertai's Familiar, and Hidden Horror can help to fill up the graveyard with creatures, enabling either of your "instant win" cards as well as embiggening Mortivore. Winding Canyons works well with your Shriekmaws and Mulldrifters, since it allows you to either hardcast or evoke them whenever you could play an instant.

This isn't so much a combo between these two particular cards, but between Colfenor's Urn and any large-bottomed critter with cumulative upkeep. Arctic Wolves is just one such card. Uktabi Efreet is another. Gallowbraid and Morinfen aren't just the names of a death metal band and an arthritis medication. They're also black fatties with painful upkeeps, famous for being in a deck called, I believe, Aesop and Son. I could be wrong on that one.

Colfenor's Urn does not discriminate between four-butts. It'll house them all, cumulative upkeep or not. If you're Liege of the Hollows or Seedguide Ash, you'll need the assistance of something like Nantuko Husk or Tendrils of Despair. If you're Cloudthresher, all you'll need is a simple evocation. Veteran Explorer is another fine man to sacrifice. One of my favourite games ever involved recurring an Explorer repeatedly against an Affinity deck. I sure did have a lot of mana when I lost.

4 Liege of the Hollows

This combo is actually legal in present-day Standard, since Fog Elemental was reprinted in Tenth Edition. Like Cloudthresher from the previous deck, Aethersnipe is a four-toughness evoke Elemental that can be evoked and then stuffed in Colfenor's Urn. You don't even need to cremate him first. These two have more in common than simply being Standard-legal blue Elementals that work with the Urn. They also combo with Vedalken Mastermind (I covered the Fog Elemental interaction around the time Tenth hit the shelves, while Ben Bleiweiss built a nifty deck a couple weeks ago featuring everyone's favourite Vedalken and some evokers). You know who else likes to tag-team with the Mastermind? Merfolk Traders (kinda)! Serrated Biskelion (remove all those unsightly –1/–1 counters)! Razormane Masticore (not really)! Platinum Angel (only if you want to risk sudden death)!

There are a couple reasons I wanted to include those last two. One, they have the requisite toughness for Colfenor's Urn. And two, they are artifacts that can be pitched to, say, Merfolk Traders and "reanimated" with Argivian Restoration, a card on my shortlist of Powerful-Looking Cards That I've Never Seen Anyone Play. Besides subbing in for Zombify in this deck, it can also recur cashed out Urns, Moonglove Extracts, and, if you're really desperate, Mind Stones.

Even ten years ago, Goblins were throwing themselves under a bus for the greater good. For proof, look no further than arguably the most devastating "saboteur" of them all, Goblin Grenadiers. Of course, in order to make your opponent lose a creature and a land, you'll need to sneak your four-mana 2/2 through his or her defenses. No mean feat. A mean feat would be to give it evasion courtesy of Lowland Oaf's Goblin-chucking ability. You won't even have to sacrifice your Grenadiers at end of turn because they'll be long gone by then! Spiderwig Boggart's comes-into-play can also do the trick, while Wort, Boggart Auntie can bring back your Grenadiers for another go around.

Goblin Vandal is another fine "saboteur" who can benefit from being launched skyward by your Lowland Oafs. Mudbutton Torchrunner, Hornet Harasser, and Festering Goblin actually like the end-of-turn sacrifice. In fact, they like being sacrificed so much, that you might as well play with other sac outlets like Tendrils of Despair and Betrothed of Fire.

Again, Ajani Goldmane doesn't so much form a great combo with Maraxus as exemplify a couple of things that work well in a Maraxus deck. Ajani produces token creatures, albeit at a very slow rate. Cloudgoat Ranger, Siege-Gang Commander, and Mobilization do this better. Just as important is the fact that Ajani can grant vigilance to all of your creatures for no mana. "Doesn't tap to attack" means "doesn't cause Maraxus to shrink." I believe that's somewhere in the reminder text. Of course, Mobilization also does this to a degree (it's got its tokens as well as Cloudgoat Ranger's Kithkin buddies covered). Similarly, Weatherlight's own Serra's Blessing will give vigilance to everybody, all the time, but the fact that it does nothing else makes it a less appealing option.

Unfortunately, even if you do end up with a mammoth Maraxus, his lack of evasion could send him on a quick cab ride to Chump City. That's where big Brion Stoutarm and Loxodon Warhammer come in. If your opponent has an impenetrable wall of Kobolds of Kher Keep, for example, and you can't go under it, just go over it or through it. A little life-gain on the side never hurt anyone, either.

Until next time, have fun with ten years ago!