Cytoplasts, the Other Blue/Green Meat 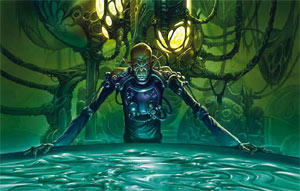 Vig, the Simic guildmaster, wished to fulfill his guild's ancient purpose - to preserve the health of all Ravnican life-forms. Of course, he was not exactly satisfied with such a mundane goal, so he expanded it out to improving the biological construction of all Ravnican beings. Do not be fooled. This is more scary than benevolent.

Yes, Vig and his Simic followers do want to make your life better, but they do not feel they need your permission to do so, and they're not asking how you'd like to have it improved. If you are like me (and most self-respecting Ravnicans), you are not exactly comfortable with this sort of doctor/patient relationship. Most of Ravnica's sentient beings are caught up in the hustle and bustle of city life. There's no time for hanging out in a pod-chamber at Novijen, waiting for a sporomantic cell to split and grow you a second pancreas. This is not to say that the Simic do not perform the regular duties of physician or researcher. The injured and infirm often visit the offices of reputable Simic doctors. But for those who are not currently experiencing the trauma of Clinging Darkness or burns from a run-in with a Pyromatics display, the Simic are viewed as quacks and mutant-makers. So, except for the mindless Ursapines of the world and the brown-nosed Simic initiates, nobody has time for the Simic and their crazy operations.

So what was a megalomaniac to do? Nobody understood that he was only out to “improve” lives. Well, if the people would not come to be improved, the improvements could be brought to the people. This was the driving thought behind the creation of Momir Vig's greatest discovery, Cytoplasty. 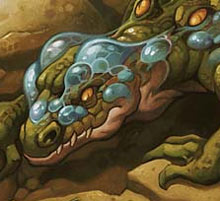 Cytoplasts are a wondrous bio-magical invention. They are small masses of living magical tissue, usually translucent gelatinous blue-green blobules, that convey genetic information to and from whatever life-form they come in contact with. A cytoplast from an intelligent host can be transferred to the head of a doofus - then the bluish blob will begin to incorporate itself into the genetic makeup of the dimwit, increasing his intelligence in the process. After long periods of cytoplastic connection, the jelly-like bluish cells will also assimilate cellular information from the new host and take on its own characteristics. For example, if the aforementioned doofus were a snake man, the cytoplast would transfer intelligence to the serpentine brain, then absorb biological information from the host and take on a scaly appearance. Genius!

Still, this new technology required a somewhat willing recipient. Cytoplasts still had to be grafted on to a submissive host. It was a painstaking process involving scalpels, mana, and a skilled Simic surgeon. Even after cytoplasty led to many successful biological improvements, the people still were not all that jazzed about having living jelly lumps attached to their bodies - even if it meant a higher IQ or a faster time in the Gnat Alley Marathon. Momir Vig was frustrated by this hindrance to a grand scale overhaul of Ravnican genetics. To him, the people just lacked vision. If they could be made to see it, all would fall into place. So he went back to the scrying vats and cooked up a new improved scheme. This one involved more magic and more mana, but no cutting and, most importantly, no cooperation from the host-patient! He had developed a form of cytoplast that could be cast from a host like a small gelatinous projectile, immediately incorporating itself into the genetics of whatever living thing onto which it happens to splat. The genetic infusion process was almost instantaneous (though the assimilation of host genetics was still slow. But that was less important.) At last, Vig had created a method of spreading genetic improvements without consent. In his mind, the consent would surely come once the people grew attached to their new strengths and abilities.

We'll have to see how that goes as we watch Dissension unfold in the coming weeks. I don't want to give too much away here. But enough babble, let's get to giving away the thing I am supposed to be giving away. Take a peek at what Cytoplasty means in game land: 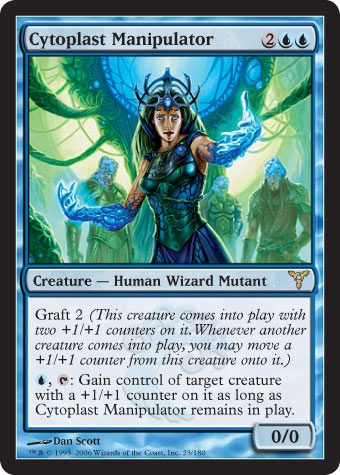 Graft! I will not pretend to be a strategy guru, but I have played with Graft cards and I'll tell you that they are fun, funky, and extremely versatile. The +1/+1 counters represent the cytoplasts - and it's a lot of fun to play a “Vigean” megalomaniac and spread abilities and fat all over the place.

Cytoplast Manipulator is just one of many creatures with Graft, each one having its own genetic juice to transfer along with its blue-green globs. The Manipulator is a great visual example of Graft because it shows both Grafter and Graftee. Dan Scott does a great job illustrating the bio-magical essence of cytoplasts as well as the lumino-venous feel of a Simic interior. In the foreground we see the Simic wizard with cytoplastically enhanced hands. We can imagine her flicking cytoplasts from her fingers at the poor guys behind her, then using the newly formed genetic connection to direct their thoughts. On her own, the Manipulator can only cyto-control one other creature. But in league with other Simic cohorts, she can command an entire army! Spin back a week or so and take another look at Mark Rosewater's preview of Experiment Kraj. Imagine the big purple pile working in concert with lady bluefingers. Fun times!

Graft cards will enjoy chumming around with cards from other sets as well. Ravnica and Guildpact give us Graft-friendly cards like Golgari Guildmage and Shambling Shell, (watch out, all you bloodthirsty Gruul!). Doubling Season might as well be a Simic holiday. And the fun does not stop there. Cards that go +1/+1 counter-crazy have been around for years. Arcbound Ravager annoying you? Bust out the Cytoplast Manipulator! Anyone else annoying you? Let the Manipulator play with her second favorite viscous material - Dragon Blood. (Story goobs - keep this little combo in mind, hint hint.)

If you have cool ideas on how to deploy Graft technology in decks or combos, post ‘em in the message boards. If you're hungry for strategy talk on this new keyword ability, have a gander at the message boards and the limitless opining of folks with more to say about strategy than me. If you're hungry for more humid, dripping Simic flavor, put on your bib and get your plate ready for the Prereleases on April 22nd.