Trick and Tifa talk to R&D's Dave Guskin about the Hero's Path, as well as some of what lies ahead in Theros. We also talk about what went down at PAX, like our Theros party, the massive puzzles, and the Theros Worldbuilding panel!

The DailyMTG Podcast is on iTunes! You can visit its page right here. Or, if you use a different podcast aggregator, you can point it directly at the RSS feed: http://www.wizards.com/dailymtgpodcast.xml.

Send us your feedback, questions or ideas! Email DailyMTGCast@wizards.com 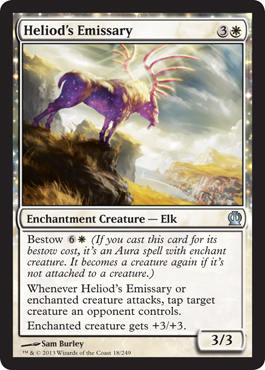 Patrick "Trick" Jarrett is the Editor-in-Chief of DailyMTG.com. Born in Atlanta, GA, he moved his wife and their two dogs to Seattle to work for Wizards of the Coast. He's a big fan of the Commander format and loves his Kiki-Jiki, Mirror Breaker mono-red Commander deck. Follow him on Twitter: @TrickMTG.

Jennifer "Tifa" Meyen is the Assistant Brand Manager for Magic: The Gathering as well as the founder and organizer for The Lady Planeswalker Society, a welcoming and friendly environment for women Magic players of all skill levels. Jennifer has been an avid gamer since birth, and Magic became her life source during Magic 2011 . Follow her on Twitter: @TifaMeyen and @MTGLadySociety.

When Gavin Verhey was eleven, he wanted a job making Magic cards. Ten years later, his dream was realized as his combined success as a professional player, deck builder, and writer brought him into Wizards R&D during 2011. He's been writing Magic articles since 2005 and has no plans to stop. Follow Gavin on Twitter: @gavinverhey.