Two of the top eight decks at this year's Pro Tour-Los Angeles fell into a new category that has been dubbed "Dancing Gnomes" for its use of the Corpse Dance-Bottle Gnomes combination.

ancing Gnomes" combines elements of control with a creature-based strategy and makes use of the graveyard as a resource. These decks usually win either by getting two Tradewind Riders going and returning all of an opponent's cards to his or her hand, or by sheer creature beatdown after casting Living Death with a creature-heavy graveyard. Either way, ending life totals of 40 or more are not uncommon.

Pro Tour–Los Angeles was a Tempest-only tournament that severely restricted card selection. The Dancing Gnomes deck isn't quite as viable in the Srandard environment in which Armageddon and mass creature destruction are common, but versions with more counterspells can still work well. In this article, however, we'll just look at the Tempest versions. 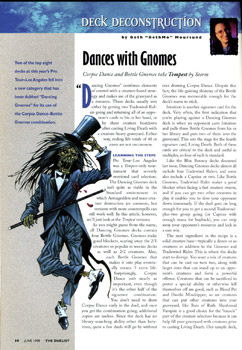 As you might guess from the name, all Dancing Gnomes decks contain four Bottle Gnomes. Gnomes make good blockers, scaring away the 2/1 reatures so popular in weenie decks as well as 2/2 creatures. Also, each Bottle Gnomes that makes it into play eventually means 3 extra life. Surprisingly, Corpse Dance isn't nearly as important, even though it's the other half of the signature combination. You don't need to draw Corpse Dance early in the duel, and once you get the combination going, additional copies are useless. Since the deck has no library-searching ability other than Intuition, quite a few duels will go by without ever drawing Corpse Dance. Despite this fact, the life-gaining shimmy of the Bottle Gnomes was memorable enough for the deck's name to stick.

Intuition is another signature card for the deck. Very often, the first indication that you're playing against a Dancing Gnomes deck is when an opponent casts Intuition and pulls three Bottle Gnomes from his or her library and puts two of them into the graveyard. This sets the stage for the fourth signature card, Living Death. Both of these cards are critical to the deck and useful in multiples, so four of each is standard.

Like the Blue Bouncy decks discussed last issue, Dancing Gnomes decks almost all include four Tradewind Riders, and some also include a Capsize or two. Like Bottle Gnomes, Tradewind Rider makes a good blocker when facing a fast creature swarm, and if you can get two other creatures in play it enables you to slow your opponent down immensely. If the duel goes on long enough for you to get a second Tradewind-plus-two group going (or Capsize with enough mana for buyback), you can strip away your opponent's resources and lock in a sure win.

The next ingredient in the recipe is a solid creature base—typically a dozen or so creatures in addition to the Gnomes and Tradewind Rider. This is where the decks start to diverge. You want a mix of creatures that can be cast on turn two, along with larger ones that can stand up to an opponent's creatures and form a powerful offense. Creatures that can be sacrificed to power a special ability or otherwise kill themselves off are good, such as Blood Pet and Dauthi Mindripper; so are creatures that can put other creatures into your graveyard, like Rats of Rath. Skyshroud Vampire is a good choice for the muscle part of the creature selection because it can help fill your graveyard with creatures prior to casting Living Death. Our sample deck, however, includes Mawcor and Kezzerdrix instead—Mawcor for its usefulness against creatures with shadow, and Kezzerdrix for sheer brutality. For the black/blue/white versions, Staunch Defenders is hard to beat as a muscle card because it gives you both a large creature and another life boost.

The last few spell slots are for messing with the opponent. Almost every Dancing Gnomes deck includes four Lobotomies, which can be devastating against another combination-based deck; it's also one of the very best ways to stop an opponent who's using buyback spells. Lobotomy meshes well with Tradewind Rider, since you can return a card to your opponent's hand and then Lobotomy away all copies of it. Some versions of the deck also include Counterspell or Power Sink, but a surprisingly high number of them get by with no countermagic at all. The black/blue/white versions add Disenchant and the "Disenchant with wings," Cloudchaser Eagle. Some players also include Altar of Dementia, which can either mill your own cards into the graveyard to set up Living Death, or finish off your opponent via library depletion when you find yourself facing another Dancing Gnomes combination.

The one thing a deck based on buyback doesn't want is to run short of mana, so go heavy on land—24 is typical. Most players include Rootwater Depths, but some of the two-color versions stick with basic lands to avoid vulnerability to Wasteland. For three- color versions, dual lands are a necessity; four each of Rootwater Depths, Thalakos Lowlands, Salt Flats, and Reflecting Pool are pretty standard.

Shut Up and Dance

As we mentioned earlier, Dancing Gnomes decks combine elements of control with a creature-based strategy. If you're facing a fast deck, your early-game strategy consists mostly of hanging on by your fingernails, trying to keep the initial creature rush from wiping you out. You usually need either Bottle Gnomes or Intuition (which promptly gets you Bottle Gnomes) to survive; you don't have enough small creatures to trade them one-for-one with your opponent. If you survive to the critical five-mana mark, you will hopefully have drawn Living Death. If not, you should at least have Tradewind Rider or one of your five-mana creatures. Any of these can turn the game around. In an ideal game, you'll get to Intuition twice—once for Bottle Gnomes and then again for Tradewind Rider on the turn after you cast the Gnomes—then cast Living Death and sacrifice the Gnomes in response. Against black or white hordes, this clears away the opposing army, leaving you in control. Red hordes, unfortunately, generally include creatures that have ways to kill themselves or each other, so you may find yourself facing just as many creatures after Living Death as before. Once you cast it, though, you'll have an army of your own, and you'll almost be at the point where you can start casting Corpse Dance with buyback. 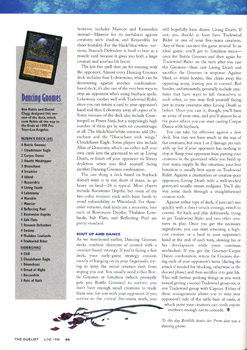 You can take the offensive against a slow deck. You may not have much in the way of fast creatures, but even 1 or 2 damage per turn adds up fast if your opponent has nothing to stop it. Keep your opponent busy putting your creatures in the graveyard while you build up your mana supply. In this situation, your first Intuition is usually best spent on Tradewind Rider. Against a creatureless or creature-poor opponent, Living Death with a well-stocked graveyard usually means endgame. You'll also win some duels through a straightforward creature rush.

Against either type of deck; if you can't win quickly with a direct-attack strategy switch to control. Sit back and play defensively, trying to get Tradewind Rider and two other creatures in play. Once you get the necessary ingredients, you can start returning a highcost creature or a land to your opponent's hand at the end of each turn, slowing his or her development while yours continues unchecked. If you get the Gnomes—Corpse Dance combination, return the Gnomes during each of your opponent's turns (during the attack if needed for blocking, otherwise in the discard phase) and then sacrifice it to gain life. This will further prolong things as you work toward getting a second Tradewind group out, or one Tradewind group with Capsize. Either of these arrangements allows you to strip your opponent's side of the table bare of cards, at which point your creatures can crush anyone stubborn enough not to concede.

To this day BethMo denies her Prom date was a dancing gnome.