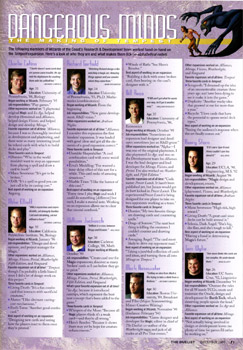 The Making of Tempest

he following members of Wizards of the Coast's Research and Development team worked hand-in-hand on the Tempest expansion. Here's a look at who they are and what makes them tick (in alphabetical order).

"Charlie doesn't want cards that are gonna cause trouble. He signals his displeasure by crushing them with his softball bat." -Richard Garfield

Favorite expansion set of all time: "Alliances, because I was so thoroughly involved in development and playtesting, and there were so many interesting (read: ba-roken) cards with which to build decks and play."

Best aspect of working on an expansion: Arguing.

"Mike's mysterious and unpredictable, yet strangely familiar. Cold and calculating, yet not without a heart." -Richard Garfield

Favorite expansion set of all time: "Tempest, though I'm probably a little biased since I did a lot of design work on this project."

Best aspect of working on an expansion: "Designing new cards and seeing how the players react to them once they're printed."

"Watching Richard design is like watching a magic act. Amazing things appear and you wonder where they came from." -Mark Rosewater

Began working at Wizards: From the beginning

Other expansions worked on: Arabian Nights. Favorite expansion set of all time: "Alliances. I consider this expansion the first 'modern' expansion. It was loaded with good ideas and got all the elements of a good expansion correct." Three favorite cards in Tempest:

"William is a cross between Sleepy and Einstein." -Bill Rose

Job responsibilities: "Create card text for Magic expansions; discover as many 'broken' cards as I can before they go to print."

Favorite expansion set of all time: "Ice Age, because it introduced cantrips, which represent the best new concept that's been added to the game."

Best aspect of working on an expansion: "Building a deck with some broken card, then beating on the card's designer with it."

"If Bill can't get what he wants one way, he'll get it another way." -William Jockusch

Other expansions worked on: "Alpha-I was one of the original playtesters. I also playtested Ice Age, and was on the Development team for Alliances. I was the lead designer and lead developer for Mirage, Visions, and Portal. I've also worked on Weatherlight, and Fifth Edition."

Favorite expansion set of all time: "Code name: Power Lunch. It hasn't been published yet, but Juzam would get its butt kicked in Power Lunch. The experimental Power Lunch is being designed for one player to take on two opponents working as a team."

Best aspect of working on an expansion: "Taking a jumbled collection of cards and ideas, and turning them all into Mirage or Tempest."

"Getting an idea from Mark is like trying to take a drink from a firehose." -Richard Garfield

Job responsibilities: "Game designer and developer for Magic; editor in chief of The Duelist; co-author of the Weatherlight saga; and jack of all trades at all Pro Tour events."

Other expansions worked on: Alliances, Mirage, Visions, Weatherlight, and Vanguard.

Best aspect of working on an expansion: "Seeing the audience's response when the set finally comes out."

"If it's not a Type II card, Henry couldn't care less about it. -Bill Rose

Other expansions worked on: Alliances (playtester), Visions, and Weatherlight.

Best aspect of working on an expansion: "Having a hand in determining Magic's future."

"Tom never thinks the cards are too complex. He understands them." -Mike Elliott

Job responsibilities: "Oversee the rules for all Wizards TCGs, create and maintain the Oracle, design and development for BattleTech, whack deserving people upside the head."

Other expansions worked on: Ice Age and Alliances.

Best aspect of working on an expansion: "Not actually being involved in design or development leaves me plenty of time for games I'd rather be working on."