riday Night Magic happens every week in stores around the world, and we want you to attend FNM in your area (or get your local retail location to run one). We know that as certified judges you are trained and positioned to be community leaders for Magic in your areas, and we'd like you to make yourselves known to the local retailers who bring the game to many players in the area, even beyond those who play in tournaments.

As a judge, you know how fun it is to play in a tournament and how easy the processes are to schedule, run, and report one. We want to encourage each of you to get involved with FNM (and the Wizards Play Network) at a local Magic retailer between now and April 30. We have lots of new organizers and players in our community following the success of 2009, and we hope you can help make Friday the best night of the week for 2010!

The first and easiest way to get involved is to play at a local FNM. Many of you already do this on occasion and we hope you have introduced yourself as a Certified Judge to the retailer and organizer already. We know your participation in events improves them with your rules knowledge, so for participating as a player, judge, or organizer, in three FNM between now and April 30, we'll send you a foil Meddling Mage. 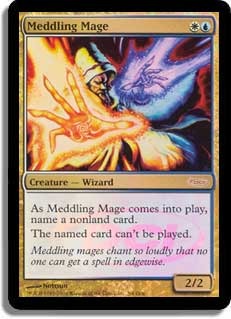 If you increase that participation to six events, we'll also grant you three wishes—Burning Wish, Cunning Wish, and Living Wish, to be exact.

The second way to get involved is to get a retail location running FNM—one that hasn't run an FNM event in 2009 or 2010. You'll need to organize, sanction, and report their first FNM, but if you are successful at getting a new retail location started we'll consider you an Exalted Angel and send you one. 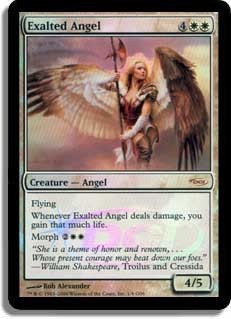 If you can convince them that was worthwhile and participate (as organizer, judge, or player) in two additional events at that location, we'll include two Onslaught fetch lands.

Increase that from three to six, and we'll make it a set by including the other Onslaught fetch lands.

Introduce yourself to your local retailer and get them to see the value of FNM and the DCI Judge Program!