he story of organized play for Magic: The Gathering is also the story of the DCI, the official regulating authority for sanctioned Magic tournaments. The one begat the other, as organized competition preceded the organization by several months.

Organized play has been a part of Magic nearly since its origin, as fans invented ways to play the game in groups shortly after its initial release. Wizards of the Coast supported these efforts at an official tournament at Gen Con in 1993. Magic fans took the idea and ran with it, organizing their own events in their hometowns.

Early Magic tournaments followed rules the organizer happened to like and ignored those he or she did not like. Some tournaments followed the exact letter of the game rules, while others relied on local custom to resolve disputes. The growing interest in tournaments generated requests from Magic players for official rules and a means of organizing the events.

Thus was born the Duelists' Convocation (DC), which would later become the DCI, a membership organization designed to promote and support official Magic tournaments worldwide. The DC was envisioned as a way to provide members with an official tournament structure and the tools necessary for creating a fun, fair, and consistent tournament environment.

The DC offered memberships to Magic players interested in official tournaments, created policies for sanctioning events, provided a set of official tournament rules, rated members' tournament performance, and helped them find sanctioned tournaments. Many of these functions remain unchanged today, although the scope has changed drastically.

The DC did not, for example, sanction tournaments in retail stores until early 1995, nor did it authorize events outside the United States. In the beginning, the DC only permitted one event in a given city on a given day, offered only one play format, and rated members using a simple point accumulation system—the more events you played in, the higher your rating. By the end of its first year, the fledgling organization boasted several hundred members.

By 1994 there was sufficient interest in official tournaments to hold the first Magic World Championships. Held at Gen Con, this event was organized and run according to the DC's first official tournament rules, and was open to all participants. By the time Zak Dolan was crowned World Champion, the DC knew it faced great challenges in its mission to create a worldwide sanctioned-tournament environment.

The 1994 World Championships sparked widespread interest in sanctioned Magic tournaments and the DC began receiving membership applications at an ever increasing rate. Very quickly, the number of DC members who started playing Magic shortly after the first World Championships equaled— then exceeded—those who had been fans of the game since its release.

These new members were every bit as enthusiastic about tournaments as their veteran counterparts, but they wanted new and different competitive formats that offered them a chance to participate without buying cards from sets that were becoming scarce.

Although Dennis Bentley (left) won $10,000 in the first "high-stakes" U.S. Nationals, at the very first tournament at GEN CON '93 (right), Alex Parrish walked away with a box of boosters, a t-shirt, and a plaque.

Magic is not a static game. With each new expansion come new cards, new rules, and new strategies. The DC realized its official tournament structure must also change and adapt to reflect and accommodate an evolving game and an evolving membership. To meet this challenge, the DC introduced a new tournament format that prohibited older, scarcer card sets. Branding the original format Type I and the newcomer Type II, the organization started sanctioning both tournament types in the winter of 1994-95.

Meanwhile, the DC realized that some Magic cards, while fun to play, did not lend themselves well to tournaments (some even disrupted attempts to create a consistent and fun environment). Therefore the DC created the official banned and restricted card lists, which banned some cards from tournament decks altogether and restricted other cards to one each per deck. Simultaneously, the DC began sanctioning tournaments in Canada, reflecting the game's growing popularity around the world.

This increased worldwide interest in the game and organized events led to radical changes in the World Championship format. The 1995 World Championships was an invitational event, with participation limited to the winners of national competitions. Hosting players from over 30 countries, the event marked the internationalization of sanctioned Magic tournaments. The new World Champion, Alexander Blumke, hailed from Switzerland; his victory and the enthusiasm of the national teams paved the way fur an explosion of international competition.

To expand into more countries, the DC needed to add a new letter to its name: "I" for "International." Following the 1995 World Championships, the DCI completely revised its tournament regulations and released a new, comprehensive document called the "DCI Standard Floor Rules." These regulations became the benchmark for fair and consistent competition and also introduced another new tournament format: Sealed Deck.

But the final, and perhaps most vital, component of the DCI's new worldwide mission was a new rating and ranking system. Based upon methods used by the U.S. Chess Federation, this new structure rated competitors against the level of their opponents. These numerical ratings quickly became the standard for measuring performance in sanctioned Magic events.

While the DCI worked to bring sanctioned tournaments to the world, the face of competitive Magic changed forever in February 1996 when competitors from around the world met in snow-covered New York City to participate in the very first Magic: The Gathering professional tournament. This gala event attracted international media attention and launched Magic solidly into the realm of intellectual sports. 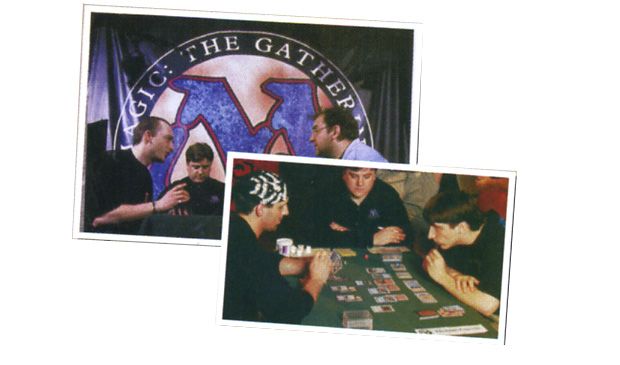 The reaction among competitive Magic players was immediate and electrifying. Invitations to the Pro Tour were coveted among players, and the event itself became the proving ground for the best players in the game. The Pro Tour offered legions of competitive Magic players an opportunity to reach for goals that exceeded bragging rights at their local card shops—it offered tangible rewards and recognition for skill and hard work.

The DCI provided two main ways for members to earn an invitation to the Pro Tour: achieve high official ratings, or place at the top of a Pro Tour Qualifier tournament. This new emphasis on ratings created a huge demand for sanctioned tournaments. To give players opportunities to improve their ratings more quickly, the DCI lifted the restrictions on tournament locations and allowed retailers to hold sanctioned events in their stores.

Later that year, the DCI introduced membership, and sanctioned Magic tournaments, to countries outside North America. This process continues today as the DCI provides Magic players worldwide with the opportunity to enjoy this new intellectual sporting competition.

The Pro Tour structure evolved to include stops in America and Europe, Qualifiers on six continents, and Grand Prix events in numerous cities. Wizards of the Coast and The Duelist created the Duelist Sideboard magazine (which evolved into the Sideboard) to cover the competitive environment and report organized-play news from around the world.

Recognizing that some Magic players still prefer less intense competition, Wizards of the Coast introduced a new organization in 1996—Arena—The League for Magic: The Gathering. This thriving program offers players the opportunity to gather at local stores and compete in a more relaxed atmosphere. With its own rating and ranking system, the Arena league helps Magic players learn the basics and hone their skills before trying their hands at more competitive DCI-sanctioned tournaments.

In addition to the Arena league, Wizards of the Coast launched a program to give younger players a chance at rewards and recognition. The Junior Super Series offers college scholarships rather than cash prizes, and encourages players who are just discovering the game to compete with players of their own age and skill level.

More than five years after its inception, the DCI now routinely sanctions 1,000 tournaments worldwide every week and sports a membership of over 150,000. Meanwhile, the DCI and Arena continue to offer competitive and casual events not only for Magic players, but for fans of BattleTech, Vampire: The Eternal Struggle, Netrunner, and the ARC System games (C23, Xena: Warrior Princess, and Hercules: The Legendary Journeys). The Pro Tour now makes stops on several continents annually (including the extensive structure of Qualifier and Grand Prix events).

Despite incredible changes over the course of half a decade, the impetus for organized play remains unchanged. Players want a place to play their favorite games and want to enjoy the thrill of competition in fun, challenging, and well-regulated environments. Meeting these expectations is a daunting task, but the staff of the DCI, Arena, and Wizards of the Coast welcomes the challenge.