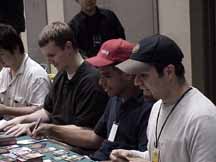 Sideboard staff has obtained the decklist for "Godzilla", the team of David Williams, Michael Long and Bob Maher. We are featuring this team's decklist because they are the only undefeated team to use an English decklist. This is a good analysis to help players who may compete in team sealed deck Pro Tour Qualifiers and Grand Prix. These are the decks that Godzilla constructed for the second sealed deck portion (for use in rounds 4, 5, 6 and 7).

The players of team Godzilla comment on their strategy: 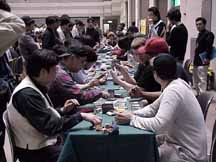 Michael Long: "Masques block sealed is more about trying to get an early start on your opponent. It's more about beatdown than most sealed formats."
David Williams: "I had 28 good cards when we constructed our decks. Instead of just putting good cards into my sideboard, we split up the Rebels between my deck and Michael Long's deck."
David Williams: "I have yet to draw my Rhox."
Michael Long: "I hadn't played with Nemesis in limited at all before this tournament. On the flight over to Japan I studied a Nemesis list and tried to figure out the environment."
Michael Long: "Since I made the mistake of not playing a beatdown deck with this round of deck construction, I didn't use the Warmonger since I would have been down to around 12 life before I could have a chance to use him - by which time I would just want to kill him myself."
Michael Long: "I went 0-4 and my team went 4-0".
David Williams: "My opponent plays Volcanic Winds then Rhox then Predator Flagship. What happened? I won."

View a mini-movie of Godzilla in action. 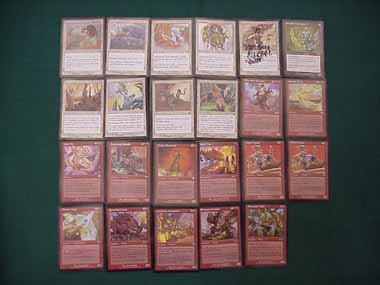 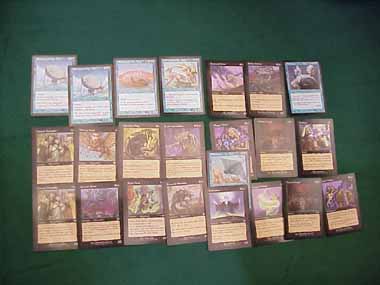