Some of Magic's biggest fans work right here at Wizards of the Coast. Many of us were drawn to helping make the game that we love.

Thanks to an idea on Twitter from @CheshirePlays and @TolarianCollege, we thought we'd show you just a few of the ways some of us here at Wizards of the Coast enjoy Magic. From Spikey Modern decks to Casual Cat decks, we've got a little bit of everything.

Enjoy our most enjoyable decks from the people who make Magic, described in their own words.

This is my Brawl deck. I built it for Gen Con and had lots of fun meeting other Brawl players and playing. Case Kiyonaga (contractor on the delta team and a good friend) inspired me to go with Vaevictus as the commander.

1 The Eldest Reborn 1 Cast Down

This is my favorite Modern deck Ad Nauseam. I love playing traditional, fair decks in Standard and Limited. But in older formats I really enjoy changing it up and playing something particularly unconventional. I've played this deck at countless premiere events and racked up some sweet finishes. There's nothing more satisfying than having your entire deck in your hand.

If you follow Elaine Chase on Twitter, this should come as no surprise. This is the deck she plays when she feels the need to curl up in a small box or knock a glass off the table. 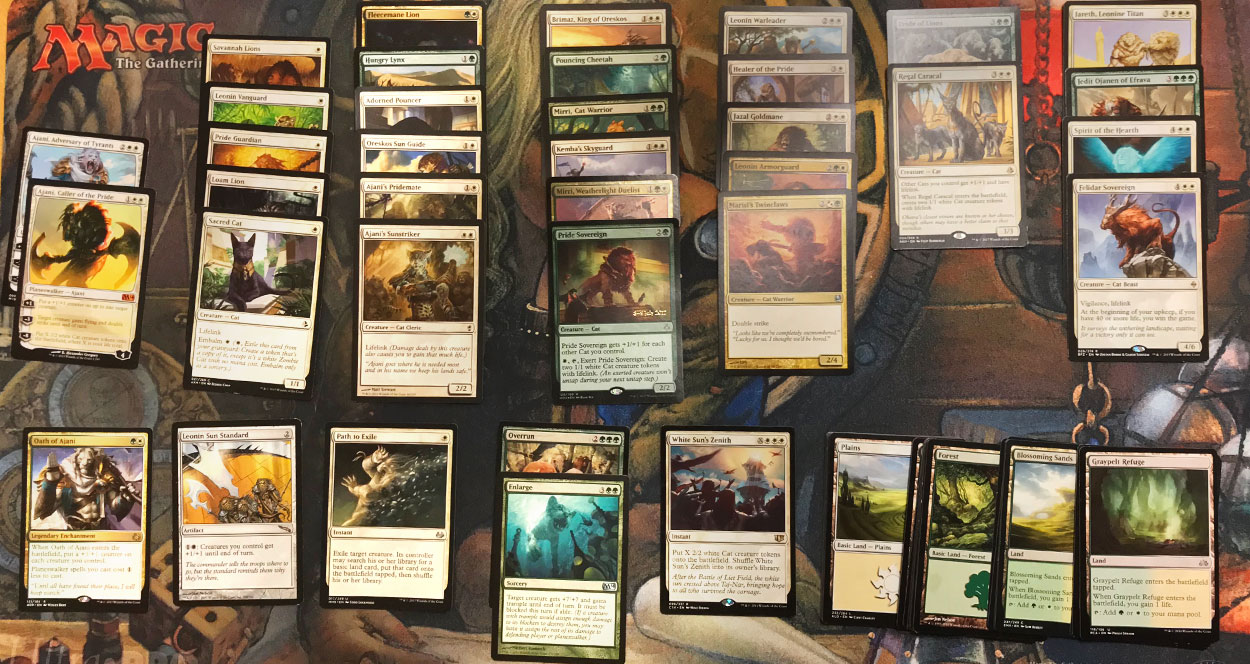 1 Ajani, Adversary of Tyrants 1 Ajani, Caller of the Pride

I have around 30 Commander decks; it's my favorite format. The deck that is consistently the most fun is my Reki, the History of Kamigawa deck. My favorite way to win games of Commander is with cards that normally would be too weak to consider but, in the context of a specific deck, become powerful enough to defeat an entire table. Reki turns every legendary card into a cantrip, which vastly increases the range of potentially viable cards. The drawback, of course, is that you only have access to mono-green and colorless cards. This means that I had to look hard for cards to interact with my opponents (other than the standard interaction of a tide of giant green creatures slamming into the red zone). It's fun beating players with cards they may never have heard of! 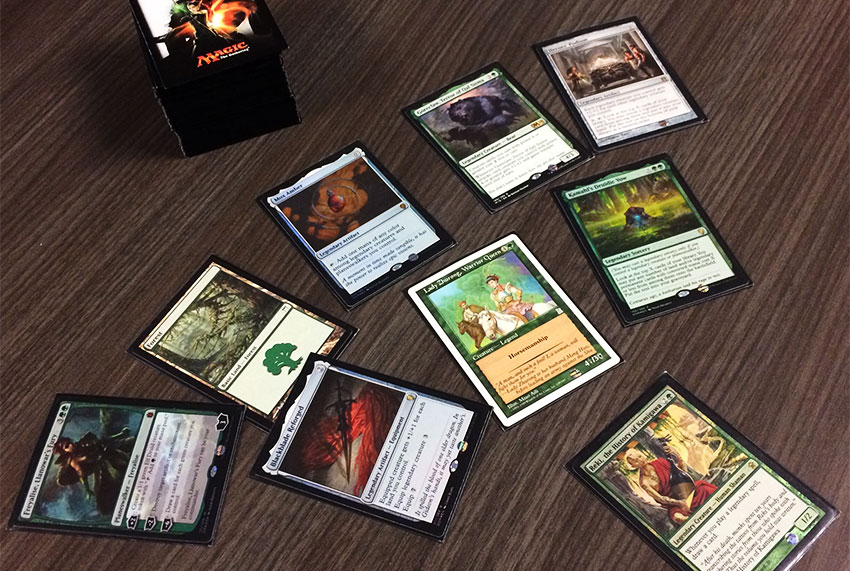 Reki, the History of Kamigawa

When I want to play Magic for fun, I usually fire up the MTG Arena Open Beta. When I want to play with other humans for fun, I'll play casual games with my daughters—either 1v1, three-person free-for-all, or Two-Headed Giant. The decks we use are reminiscent of the style of deck I fell in love with the game playing: "What can I build from the contents of these booster packs?" My kids and I will open a box or a bunch of packs, they'll pick out the cards that excite them, and I'll make a deck around it.

My oldest daughter gravitated toward The Gitrog Monster, Liliana, and Emrakul from the Shadows over Innistrad and Eldritch Moon packs we opened a few years ago, and this black-green delirium deck is still her favorite today. The real star of the show is the Chittering Host made by melding Graf Rats and Midnight Scavengers. 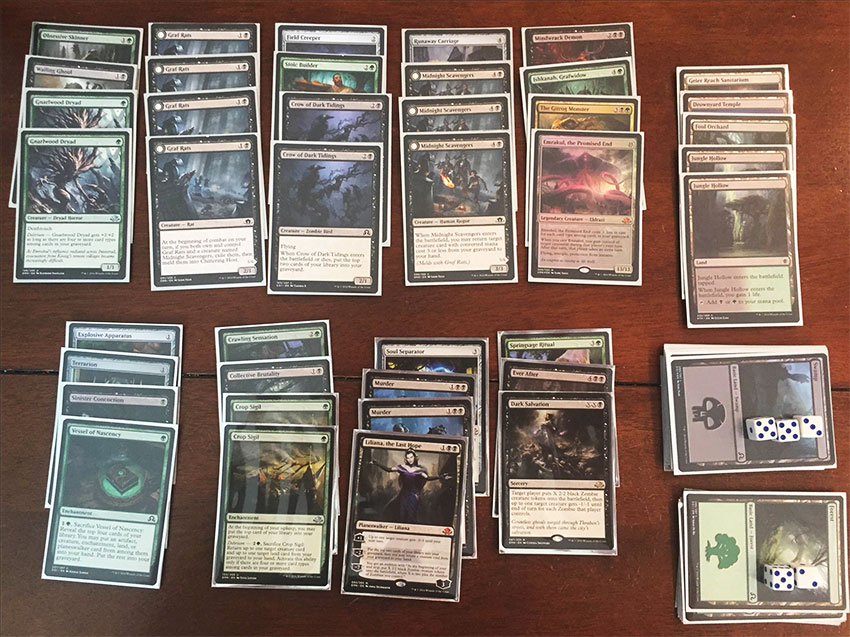 1 Collective Brutality 1 Ever After 1 Dark Salvation

This isn't my favorite deck, but it is my newest deck. After creating M'Odo through Wizards' Heroes of the Realm award, I knew I needed to make a Commander deck with it. But it's way too easy to combo off; all you need is a single 1-CMC creature, a single 2-CMC creature, etc. That kind of consistency seems counter to the spirit of the card, and certainly counter to my sense of fun. So, I took on the deck-building rule of "no creature cards," with the intention of using the creature cards in my opponents' decks instead. I ended up breaking that rule for Ulamog so I could get some powerful reshuffling, but I accept that I simply need to never activate that ability targeting myself (not a problem; there are way more fun things to do with eleven mana). This deck is totally untested and probably missing a few staples that I "need" to have, but this is what I'm taking to my next Commander game. 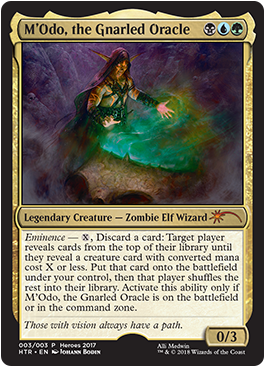 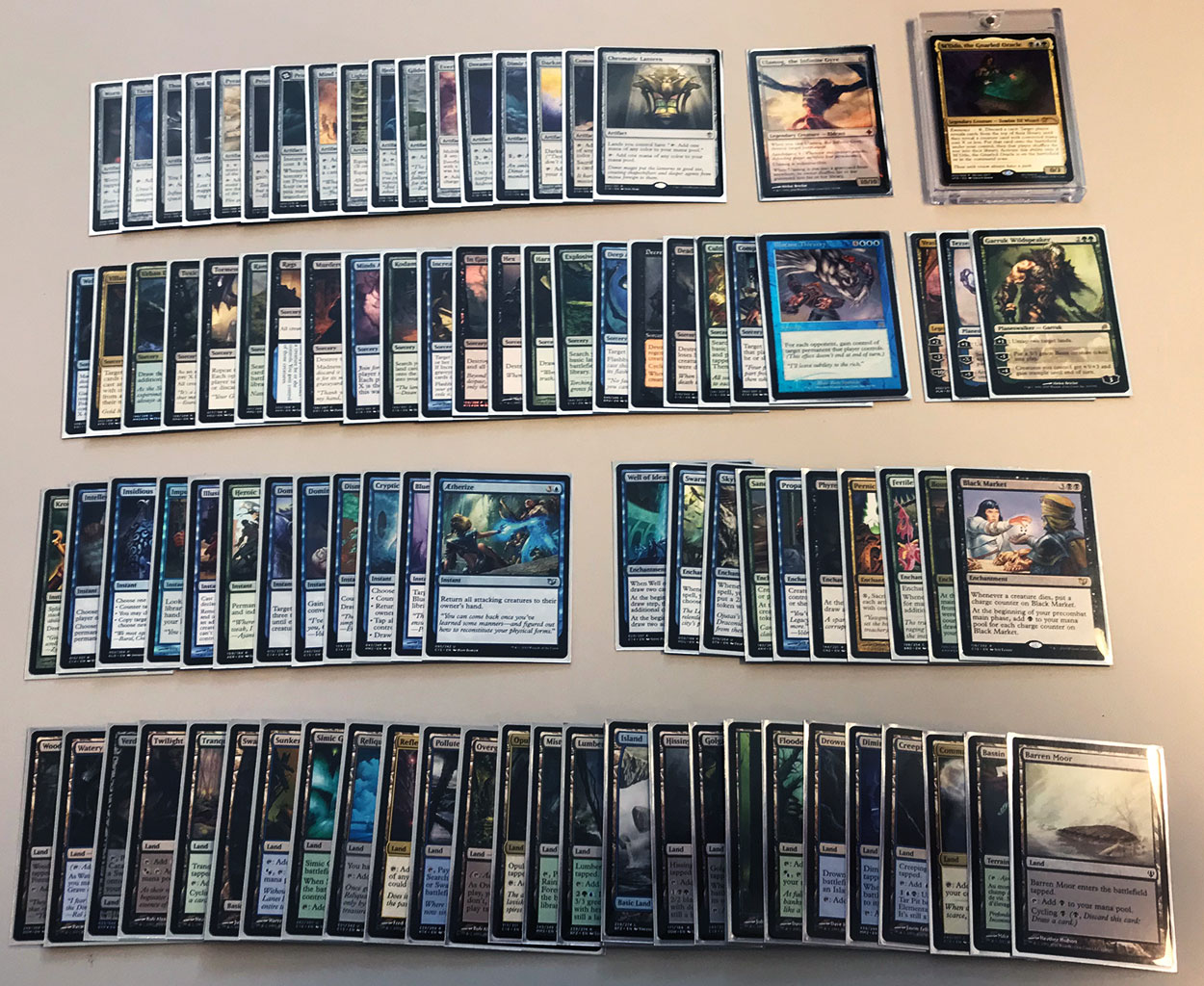 One of the many exciting things I get to do in my role is explore new and burgeoning formats. I love designing, crafting, and, of course, deck building for them. Today, I want to highlight two of my decks which are doing exactly that.

The first is in a format you have probably heard plenty about lately: Brawl!

Recently, we had the first ever Brawl Championship at Grand Prix Richmond! I flew out to Richmond myself for the tournament and wanted to play something fun. So, I built up Arcades, the Strategist. There were tons of different legendary commanders in the tournament, but I was the only Arcades. Fielding cards like Wall of Mist and Suspicious Bookcase, my deck was full of oddballs

and it ended up being some of the most fun I've ever had playing Magic!

Beating down with my army of defenders put a huge smile on my (and many of my opponents') faces, and it turns out it was quite strong too, as I advanced through five rounds to make the Top 4 players, losing only to the eventual winner who was playing Firesong and Sunspeaker. There are some surprisingly great "Wall tribal" cards in Standard in addition to Arcades, like Mentor of the Meek, Tetsuko Umezawa, Fugitive, and Slaughter the Strong.

1 Rashmi, Eternities Crafter 1 Azor, the Lawbringer 1 Bounty of the Luxa