With a Deft Touch

wouldn't be Magic without a sense of danger. Every so often, a card should have enough potential that you want to run out, buy four copies and start breaking formats. It's probably fair, but there's that chance that it isn't and if you hurry, you could be the one to prove it. 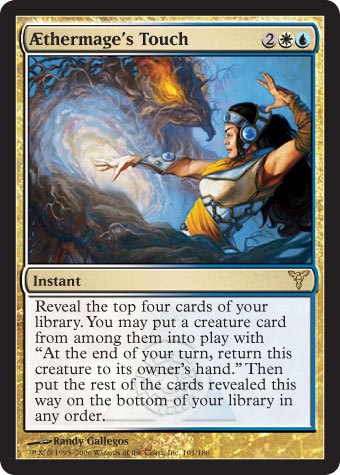 When used without any special preparation, this card is already interesting. For a mere four mana you get the best creature out of your next four cards, and you get it into play at instant speed, ready to block. You can then untap and attack with that creature, after which it doesn't die. It only returns to your hand, ready for you to cast it later. The risk is that you will miss and not find any creatures, or not find anything big enough to be worthwhile, but the upside is already large.

Now imagine if you have a Sensei's Divining Top in play.

It's a whole new world. Suddenly you have the ability to know what creatures you are about to hit, waiting until that Angel of Despair is on top of your library. You only get one turn's use out of the creature, but even a standard issue big creature is going to kill an attacker and then hit back hard. If you use a creature with a comes into play ability like the Angel of Despair, you also get that effect and then the creature returns to your hand ready to do it all over again once you have a few more turns to build up your mana.

It also does something else that might not be obvious, which is that it gets rid of the other cards in your top three. Once you have enough land, every land you move off the top of your library gets you one card closer to everything useful left in your deck. In general, the more control you have over the top of your library, the better the effect of AEthermage's Touch will be for you. Your opponent is playing in a nightmare game. He has to worry about you putting a giant creature into play every time he attacks, and every turn he doesn't you get closer to gaining control of the game.

Once you've combined comes into play effects, big creatures and manipulation for the top of your library, all that's left is to cast this early and often. Sensei's Divining Top already helps, but there's no reason to stop there. Card drawing is a good idea, and so is tutoring. However, all of that is still playing essentially fair. You can take it to the next level.

The next level is not worrying about the fact that your creature was going to leave play. If you sacrifice your creature, who cares that it wasn't going to stick around? For example, take the Dragons. If you put Keiga into play and then sacrifice him (say, to Greater Good), then you are a happy man. The same goes for Kokusho or Yosei. This has the added advantage of letting you play with some of the best creatures in the format. When you put Keiga into your deck, you're not exactly making a big sacrifice. A sacrifice might be exactly what you're looking for.

The other way to the next level is making the creature stay in play. It has an effect trying to pull it back to your hand, but that doesn't mean that you're doomed to recast it later. When cards leave play, they lose their memory that effects like AEthermage's Touch are trying to yank them into your hand. All you have to do is make the creature temporarily leave play, and when it comes back it will stay in play forever. You need something to make the creature blink out of play, something like Otherworldly Journey or perhaps Ghostway.

What's that you say? La la la, not listening.

This is a powerful strategy. The biggest problem is that there is tension between wanting to play a lot of large creatures, AEthermage's Touch, Sensei's Divining Top, more deck manipulation and cards that protect creatures. That's a lot of things to fit into a deck. How do you get enough of every piece? Do you play a creature deck that incidentally plays Touch, resulting in a potentially unwieldy mess and lacking protection for the Touch, but having a good chance of getting something amazing every time you cast it? Do you play a control deck that only casts Touch when it has seen the top of your library, so you always get what you want but often find yourself unable to cast Touch? Do you play a control deck willing to risk the top of your library and accept that a lot of slots that would otherwise go to spells are instead going to creatures, probably bigger ones than you would otherwise want to play?

It's not easy. Every manipulation card you play makes Touch easier to find, but is one less good thing to find with your Touch. Every card that helps you protect your Touch makes it weaker. The deck wants lots of mana so it can use its expensive men, but that's even more slots that you don't have for other things. You can't have everything you want. There are lots of good ingredients, but you have to pick and choose.

AEthermage's Touch is a card you very much want to build around. The result is that in the deck that focuses on playing AEthermage's Touch, your Touches will be amazing. Every time you play one, your opponent will wish you had drawn something else – at least, they will before they see what you put into play. I love the moment when you play AEthermage's Touch without manipulating your library first and both players look to see which cards are going to turn up. The card originally didn't require you to show the cards to your opponent, and that change made it a lot less painful to play against. The flip side of that is that you'll be drawing some cards that aren't optimal for your deck. Depending on how much you build around the Touch, you could have creatures in your deck that are extremely difficult (or in extreme cases even impossible) to cast. There will also be other cards that make your Touch better, but which will look rather silly if you don't get to pull off a Touch.

When you're playing against AEthermage's Touch, this is the weakness that you must seek to exploit. Your opponent is likely putting a lot of pressure on AEthermage's Touch to do a job for him, so your response should be to work to deny him that Touch, and force him to confront you without his precious trick. Make him discard the Touch, and laugh at the rest of his now useless hand. Counter his Touch, and force him to play his creatures the hard way. Blow up his lands so that he doesn't even have the four mana he needs. If all else fails, hope he didn't draw one… or that he doesn't find what he wants when he casts it. If even that fails, it's time to weather the storm.

AEthermage's Touch is a great deckbuilding challenge. There are a lot of puzzles to solve and options to consider, and those who find the right answers will likely be rewarded with tournament victories. With this card getting so much help from the infamous Sensei's Divining Top, these next few months are the Touch's time to shine. If you have what it takes, it could be yours.