Dissension features 180 cards, with randomly-inserted premium cards. It will be available in booster packs, theme decks, and Fat Packs (which include six booster packs, the novel, a player's guide, and much more). 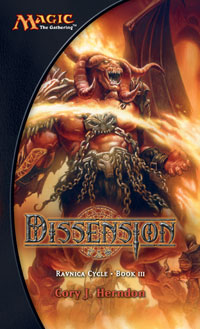 The Rakdos cultists bloody the streets with a viciousness matched only by the Boros angels’ attempts to eradicate them.As it is, the dead outnumber the living. The Guildpact is torn by dissension. And the guildmasters are under attack.

Lucky for Ravnica, on a world where ghosts linger, being dead isn’t half the excuse Kos would like it to be.

The final title in the exciting trilogy dealing with the new Magic: The Gathering expansion sets, Dissension gives players a sneak peek at the upcoming card releases.

ar from the chaos caused by the attack on the Conclave years ago, the nearly abandoned Utvara district has become the unlikely epicenter of guild contention. Conflict between the area’s Gruul squatters and Orzhov titleholders masked a deeper truth: Relics lay under the Husk of Utvara, and Niv-Mizzet’s eldest magewrights desperately sought them...

In this final expansion set in the city-plane of Ravnica, players will be introduced to the final three guilds of the block: the Azorius Senate (blue-white), the Cult of Rakdos (black-red), and the Simic Combine (green-blue), as well as the secret of the district of Agyrem, the Ghost Quarter. 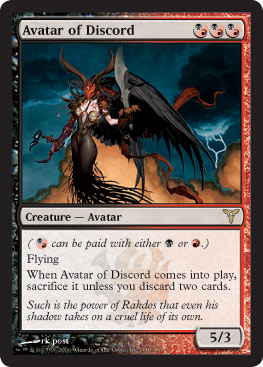 (For the Dissension FAQ, see the Magic Set FAQs page.)