Dissension in the Ranks

oo many cooks spoil the broth, so it's natural that too many guilds spoil the world. With ten powerful forces trying to take control of Ravnica, something has to give. The Dissension set may be our last look into this plane for a while, but it's anyone's guess what condition the world will be left in by the end. We complete Magic's latest block with the last three Ravnica guilds, and they can't be any more different: one is composed of biologists with a twist, the second is a cold set of lawmakers, and the third is a bunch of partiers whose favorite favors are ice picks and whips. With a group like this running around, things are sure to get heated. 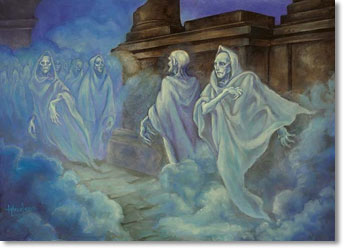 Before we get into the guilds, let's take a quick look at one of Ravnica's main oddities: its afterlife. The line between life and death on this plane is very thin indeed, and not just because of the activities of the Golgari and Orzhov. The dead tend to linger, even without any apparent intervention from the living. Thus, even in death, some poor souls cannot escape the power of the guilds, as the Orzhov and Dimir like to corral "loose" ghosts and use them for their own ends.

The spirits that haunt Ravnica's sewers and shadows have become a fact of life for the average, jaded citizen. So very few are at all curious as to why this state of affairs exists. Some believe that earthbound spirits are being punished by higher powers for even being part of a corrupt world like Ravnica. Others believe that it's the doing of one of the guilds, following some secretive agenda. The Izzet have their own theory, one that few pay attention to and even fewer take seriously: the source of the world's spiritual troubles lies in another world entirely, in some flaw in the very fabric of time and space itself. But the nature of the flaw, and how it can be fixed (if it can be fixed at all) is a question they have yet to answer. Whatever the truth, the fact remains that the dead are just as much a part of the world as those who still breathe. 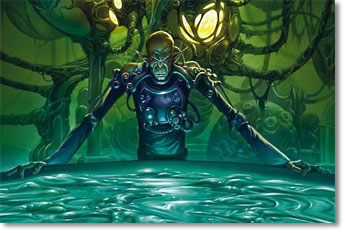 And now, I'm pleased to present the last three Ravnica guilds. We start with the Simic Combine, which, like the Izzet, is known for their scientific achievements. The similarities between the two guilds end right there. When the Guildpact was first put into place, the Simic were charged with preserving nature, which was already in a death spiral. The vast population, which cared about nothing but themselves, soon made sure that the Simic failed in their original objective. But from this setback arose a new opportunity, and a new purpose: creating a new natural order to replace the one that had been taken away. This new nature would be better and stronger, able to coexist and thrive alongside the now-entrenched Ravnican civilization. Thus, every living thing, from plants to frogs to leviathans to even people, is fair game for a little biomantic manipulation.

Momir Vig, the elvish biomancer who leads the Combine, oversees all work done, and determines the general direction Simic scientists take. Though much of the Simic's work has been beneficial, in the form of medical advances and other such discoveries, it's also resulted in some pretty ugly and destructive monstrosities when a biomancer gets too carried away in his work. One of their most popular inventions is the cytoplast, a symbiotic amoeba-like organism that strengthens its host, and sometimes even grants other abilities. In fact, there are dark rumors within the Combine that Momir Vig has a very special project spun off this research - a savage, instinct-driven being, based on cytoplastic technology, which Vig believes is the ultimate lifeform. What this being is, and what Vig intends to do with his new toy, is something that only the Simic leader himself can answer. 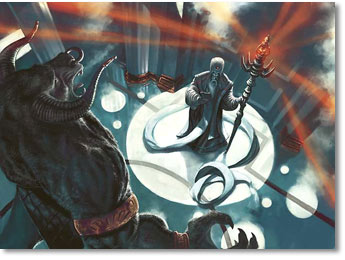 The Azorius Senate is often underestimated by both average citizens and the other guilds. After all, all they do is make the laws, which, despite the best efforts of the Boros Legion, are often ignored. And everyone knows that the Azorius are most interested in keeping the status quo. So how dangerous could they be? The answer, of course, is "very." The Senate controls some of the most learned mages on the plane. These sorcerers care about nothing except advancing the Senate's agenda: to keep Ravnica from sliding into chaos by allowing nothing to change. The Azorius also command large cadres of loyal knights. Their stated purpose is to protect the Senate and to keep order during debates and trials; after all, law enforcement is the Boros Legion's responsibility. But few doubt that these soldiers would be used on the rest of the world if the Senate deemed it absolutely necessary.

Grand Arbiter Augustin IV is the latest in a long line of Azorius leaders. Ever since the time of Azor, the Senate's Parun, each Arbiter has been hand picked and groomed by his or her predecessor, to ensure stability and continuity in its leadership. A wise and mysterious sphinx has served as a behind-the-scenes advisor for thousands of years, though only the Arbiters are capable of deciphering her strange, cryptic words. She and the rest of the Senate see themselves as a lone bulwark, Ravnica's last and greatest defense against self-destruction. Their laws tend to be oppressive and harsh, and appeals are rarely heard, never mind granted. Any advancement or shift in power is carefully weighed by the Azorius to determine whether it will upset Ravnica's carefully balanced society. If they determine that it will, they will stop at nothing to stifle it and those responsible for it. 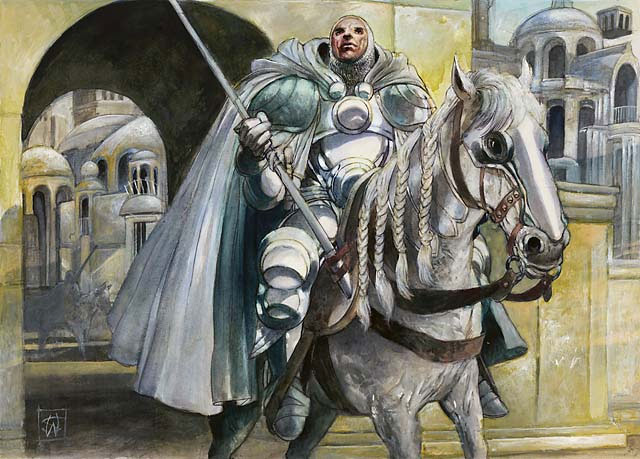 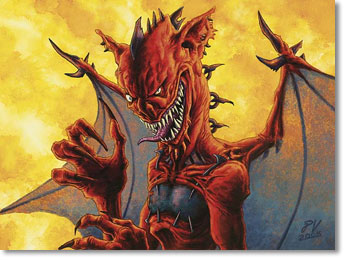 Finally, we introduce the Cult of Rakdos, a group that definitely knows how to have a good time... at the expense of everyone else. Unlike their fellow anarchists the Gruul, this guild is much more concerned with doing what they want, when they want, than with any loftier goal. Unfortunately for the rest of the world, their idea of a party tends to involve blood, fires, and lots of screaming. If there's a way to make death more painful, or explosions more hazardous, it's certain that a Rakdos cultist is cheerfully using lots of trial and error to find it. Such a masochistic and sadistic group is a danger to themselves and everyone around them, but their Parun's canniness has turned that into an advantage. The Rakdos are known as the "go-to" guild when anyone needs an outside saboteur or assassin. Thus does the Cult mix business with pleasure.

Of course, just because the Rakdos live in the "now" doesn't mean they can't plan ahead, or that they don't want anything more. Rakdos (as in the demonic founder of the guild) wants everyone on Ravnica to share his philosophy. As it turns out, that philosophy also creates the ideal method to spread itself! Surely, once everyone sees what a good time you can have following Rakdos, they'll follow suit… or become part of the evening's entertainment. To accommodate their needs, the Rakdos are always on the lookout for new toys during their raids: caustic liquids, torture devices, exotic beasts thought long dead… If it can kill, it makes for a great time. 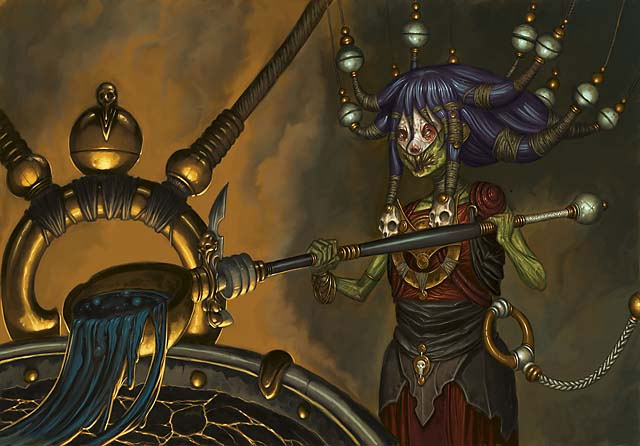 With guilds like these, it's no surprise that the Guildpact is in serious trouble. The magic that keeps the guilds from breaking this ancient treaty may not be enough anymore. The last novel in the Ravnica trilogy will see plenty of familiar faces, and some new ones, dealing with a problem that's as old as the world itself: inter-guild conflict. With dangerous monsters on a rampage and the Cult of Rakdos wreaking havoc, even the Azorius Senate's cold magic and the heat of the Boros Legion's angels are having a hard time keeping up. Old questions are answered even as new ones are introduced, and pretty soon Ravnica may have to face a question that's been hanging over them for thousands of years: what will become of the world if the Guildpact is unable to stand?

With that dilemma hanging in the air, it's the perfect time to introduce my preview card, considering the role he plays in that quandary. My other Ravnica block previews have been guild champions (a Legendary creature who's a prominent figure in the guild, but not the leader), but this time, I have the actual guildmaster, and one of the most violent to boot! The demon Rakdos has carved out a pretty nice niche for himself and his guild; looking at his card, it's no wonder he's respected and feared by both his cultists and Ravnica at large.

As you'd expect with a demonic Parun, when Rakdos is on the scene, a lot of things will be dying. The cost of attacking with him is high (not so high if you're playing with some of the many demons from the Kamigawa block), but the cost to your opponent is even higher: the same rate of permanent loss and a boatload of damage. Of course, the former makes it even harder to deal with the latter, making for a party that Rakdos himself would enjoy. Combine with cards such as Grave Pact, and you can have just as good a time as the Cultists do!

The world will shake. That much is certain. But how much of Ravnica's centuries-old institutions and civilizations will be standing in the end is another question entirely. Some believe that things can't get any worse, but they're known as "optimists." When it's all over, Dissension can either tear people apart, or bring them closer together. Whichever happens, the complex puzzle that is Ravnica will be put together in a much different way. Come and see what that picture looks like as the new set unfolds.