Both of these teams have female players and they're paired against each other on Table 5 on the next-to-last round of the tournament. 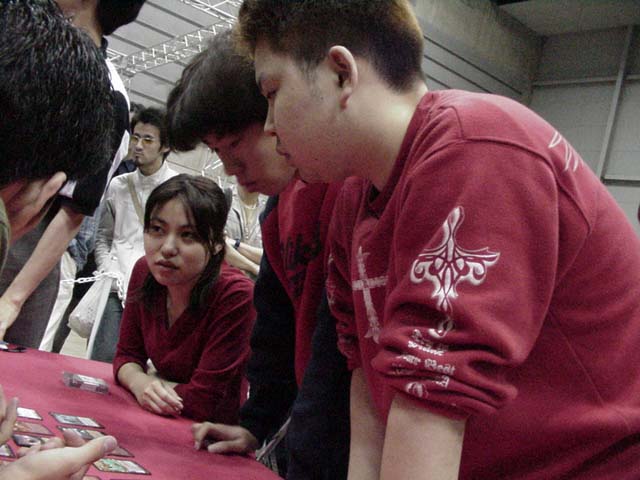 The second Invasion pack opened by Apprentice gave Takahisa a Noble Panther and Masahiro a Kavu Chameleon, solidifying a potential green-white deck for him, while Takahisa worked on a red-green deck.

Kazumi Kikagawa, Masahiro's eventual opponent drafted red-green, while Masahiko Morita took a Probe to go with his blue-white deck. Adding an Agonizing Demise on the next pack, he showed that he was willing to add a third color if it meant he got extra power.

The players in the middle both drafted red-black-X decks, with Poor Shark's Tomomi Otsuka adding some green, and Apprentice's Nobutoshi adding some blue.

Very few outright bombs appeared, except for Takahisa's Verdeloth the Ancient, until the second-to-last Invasion pack, which gave Apprentice an Armadillo Cloak, a Breath of Darigaaz, and Tsabo's Assassin. The final Invasion pack added a Reckless Spite for 2B and a Void for Masahiro, showing that sometimes, it's okay for team members to draft the same colors side-by-side.

When the Planeshift section of the draft started, Takahisa took a Radiant Kavu over Magma Burst, which went to Tomomi. Takahisa continued his multi-color ways when he first-picked a Questing Phelddagrif from a pack that was so strong that the sixth pick was a Hunting Drake. Tomomi, meanwhile got a Terminate and a Shivan Wurm (over a second Magma Burst) from the next two packs, increasing her deck's power enormously. Her luck continued, getting a Lava Zombie from the last deck opened, a deck where her pick wasn't until fifth.