elcome back to the Draft Viewer! Today we've got something a little different. Magic Online has started having drafts with each booster containing cards from all of Shards of Alara block, and the world of paper Magic has the all-foil boosters which also contain cards from the entire block. We thought it would be fun to feature a draft from this new format. We also thought it would be fun to have an all-foil draft here in the office. (Spoiler: we were right!)

So here's a draft viewer of our in-office all-foil all-Shards of Alara block. Enjoy! 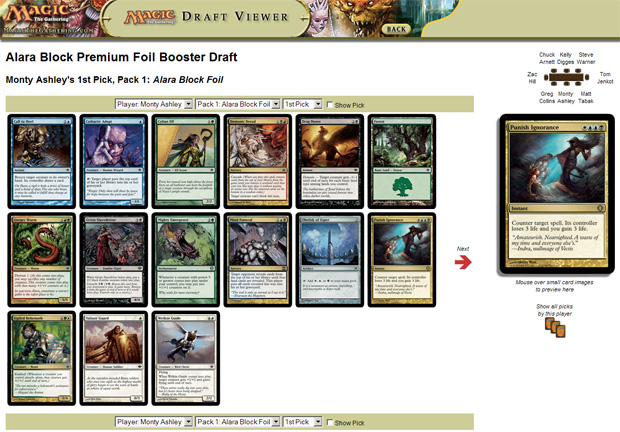 We didn't keep very good records of the action, although a few of the players made some notes. Here was Monty's first pack to choose from: 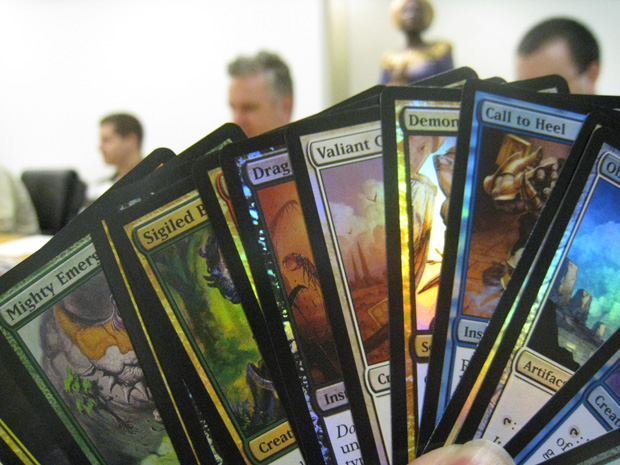 He went 2-2 with a deck that featured more counterspelling than is normally considered wise. Zac Hill went 2-1, which means that the winner was Steve Warner, at 2-0 (beating Zac in his last game)! Here's Steve's deck:

And, because we have it handy, here's Zac's list:

About the draft, Zac says, "What was awesome about the format was how much better your mana worked out to be than in full Shards block. Because you could go after Landcyclers and Borderposts across all three packs, you didn’t have your manafixing competing with Alara Reborn’s overall higher-than-average power level. Moreover, the presence of early Blades allows you flexibility while choosing a Shard when drafting.