elcome back to the Draft Viewer! This time, we're going to temporarily leave the world of Magic Online and journey to Japan for two drafts from Pro Tour–Kyoto!

First up is Draft One, Table Three: Marcio Carvalho, Shouta Yasooka, Peter Wimmer, Joel Calafell, Cedric Phillips, Taichi Fujimoto, Yuuichi Kishimoto, and Luis Scott-Vargas. This is the draft that happened before Round Five. Click on the screenshot to launch the Draft Viewer! 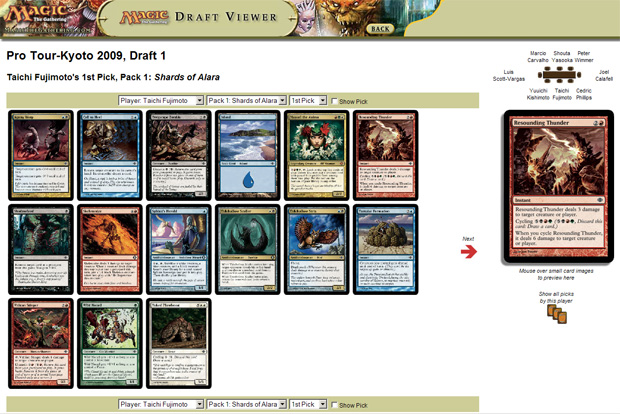 Coming into this draft, all eight players were undefeated (Joel and Taichi each had three wins and one draw; everyone else had four wins) and they were ranked 17-24. After the three rounds of the draft, here's where the players stood:

And, since this was a Pro Tour, you can read the coverage of the Luis Scott-Vargas and Shouta Yasooka!

Now let's move forward to Table Six of Draft Two. These players were ranked 41-48 at the time and had to draft well to have a shot at the Top 8. Josh Ravitz, Charles Gindy, Cedric Phillips, Ryan Bushard, Shingou Kurihara, Masayo Ishikawa, Gerard Fabiano, and Masahiko Morita, draft! Again, click on the screenshot to launch the Draft Viewer. 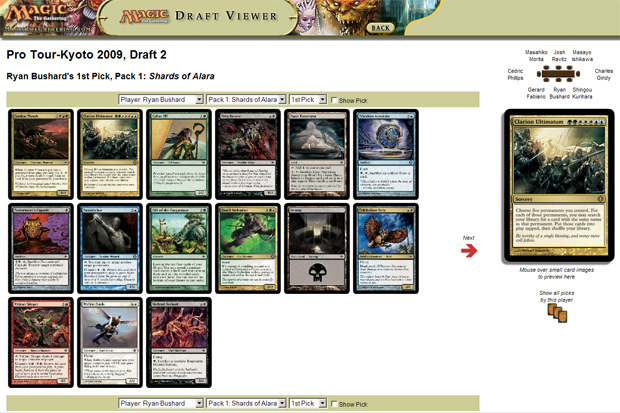 Charles Gindy and Cedric Phillips faced each other in Round 9. After the three rounds of draft, here's where these eight players stood:

Want to see how the tournament came out? The complete event coverage is only a click away.