t PAX East 2013 this past weekend, we announced the Theros block, but the main focus was the upcoming Magic set: Dragon's Maze, happening on April 27-28, 2013. We'll have the full panel online later this week for those of you who want to see it from start to finish. Until then, here are just a few of the things we talked about: We revealed the Maze Runners for each guild, such as Teysa, Envoy of Ghosts (representing Orzhov); the Dimir's Mirko Vosk, Mind Drinker; and even the full reveal of Gruul's champion: Ruric Thar - including his card! 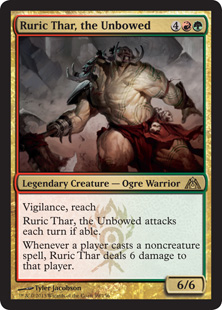 And we unveiled the awesome Dragon's Maze trailer:

So let's look at the Dragon's Maze Prerelease! I don't want to dive too deep into it but it's going to be the final event for the Return to Ravnica block, and since it is a bit different from the previous two we want to make sure you all are prepared for what you're getting into!

At your store you're going to be diving into your own Implicit Maze, competing against the other guilds to see who can win the race to Maze's End. Just by participating you'll get the promo Maze's End!

The Guild Prerelease packs at the Dragon's Maze Prerelease are going to be a bit different than those you used at the Return to Ravnica and Gatecrash Prereleases. Inside they will have:

For example, let's say you choose Boros as your guild at the Prerelease, then your guild pack could contain:

We'll dive deeper into the Prerelease as the event grows nearer, so be sure to check back on April 22 for the full Prerelease Primer we do for every set!