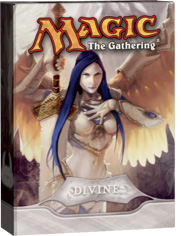 ith the divine deck, righteousness is on your side. The demonic deck starts out faster, but you've got the tools to resist the assault. If you can survive the onrushing hordes long enough, you'll triumph in the end.

This deck is very mana-hungry, even with twenty-six lands. You'll want to mulligan hands with only one land, especially if they contain multiple expensive cards. Playing Marble Diamond on your second turn will put you ahead by one mana and help you play high-cost cards later. Always think twice before cycling Secluded Steppes, because you might need the mana to play something big! Gaining life can stall the game long enough to mount a big offense. Play Angel's Feather early if you can, and don't forget about it when you play spells! It can gain you a lot of life over the course of a long game. Venerable Monk and Angel of Mercy give you a nice life boost when they come into play, but perhaps your best life-gain spell is Righteous Cause. It blunts opposing attacks and triggers on your attacks as well.

Your creatures should win many combats, especially if you have Angelic Page, Serra Advocate, or Icatian Priest in play to pump them up. Keep Angelic Page and Serra Advocate back when other creatures attack to make blocking all but impossible for your opponent. On defense, each can block an attacker and then tap to pump itself up. An untapped Serra Advocate is a meaty blocker that can stop the entire opposing team in its tracks and give you some space to breathe—and it's even better with Serra's Embrace. Angelic Protector gets extra help from your pump creatures, so it's pretty tough to kill in combat as well. As an added bonus, Kuro, Pitlord's ability can never get Angelic Protector down to zero toughness!

Your creatures are a precious resource that you'll want to keep safe. Healing Salve is usually better for saving a creature from dying in combat than as life gain. Otherworldly Journey is awesome for this too. It saves one of your creatures, gives the creature a +1/+1 counter, and can even "reset" Angel of Mercy and Twilight Shepherd.

You only have a few spells that deal with creatures, so use them wisely. Serra's Boon can shut down or kill a small creature, but Pacifism and Faith's Fetters work best on the biggest baddies you can find. Only use them early if you must do so to stay alive. Your goal is to drop these defensive Auras on big, juicy Demons.

When you do bring your mightiest Angels onto the field, you'll want to protect them. The demonic deck has spells that force you to sacrifice creatures, so keep one or two smaller creatures alongside your big ones if you can. When properly protected, your big Angels will teach their age-old enemies the true meaning of the word wrath!

he demonic deck will serve you best if you're not afraid to be cruel. Devoted Minions, dastardly Imps, and other nasty spells prepare the way for you to summon mighty Demons to your cause. Use an early rush of Imps to weaken your quarry. Daggerclaw Imp and Foul Imp hit especially hard, and an early Unholy Strength will help any Imp push through for damage. If you have Duress, play it early to stop any problems before they start. Abyssal Specter can also help you attack your enemy's hand.

Resist the urge to use Dark Ritual to pump out early attackers. Instead, use Dark Ritual and Overeager Apprentice to play your big spells on turn four or five, before the enemy is ready for you. The forces of the divine deck shore up their defenses quickly, so you've got to overwhelm them as fast as you can. Don't throw your minions away lightly, though—you may need to sacrifice them later! When the enemy does get a defense going, you'll have to change tactics. Cackling Imp and Soot Imp assault your opponent's life total directly. Breeding Pit lets you build up an army of 0/1 Thrulls ready to gum up the ground and serve as sacrifices to Lord of the Pit, Oni Possession, or Fallen Angel. A single Stinkweed Imp can keep a whole bevy of Angels at bay with its deadly ability. And if you need to keep Lord of the Pit happy, you can keep dredging back Stinkweed Imp and sacrificing it. Save your creature-killing spells for the biggest threats unless you can use them to push through for enough damage to win. Cruel Edict and Barter in Blood are nasty surprises.

You only have a few ways to deal with Akroma, Angel of Wrath once it's in play, so use them carefully. Reiver Demon is the very best of them. It can destroy not only Akroma, but all of your enemy's creatures . . . and none of yours. Corrupt and Consume Spirit do triple duty. You gain life while killing a creature or dealing the final points of damage to your opponent. If timed and aimed correctly, these spells can turn the game around. When you play the powerful Demonic Tutor, it will often be one of these spells or a Demon that you'll search for.

Don't be afraid to lose some life to get what you want. You may have to take a few hits from a soaring Angel before you can crush it. Souldrinker can get, if not huge, certainly big enough to create problems. And Promise of Power is an awesome way to reload your hand, make a big Demon, or both! It's well worth paying 5 life. And whether you use Kuro, Pitlord or Reiver Demon, don't hesitate to wipe out all life on the other side of the board.