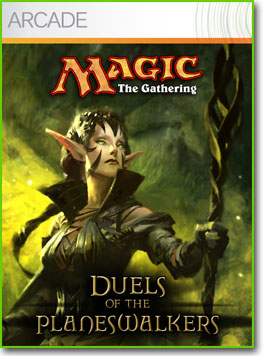 elcome! You're about to be introduced to Duels of the Planeswalkers (Duels), an awesome new game that brings the game play of Magic: The Gathering to the Xbox starting June 17. You read that right, we have an official launch date and it's just two weeks away! Ready to see what you'll be able to get?

Duels' graphics and animation are simply better than you've ever seen for Magic or any other digital trading card game (TCG). One glance at Duels on a high definition (up to 1080i) screen, and the evidence is clear.

Now, graphics are great, but game play's the thing. In game play, Duels delivers! Duels of the Planeswalkers has over 40 hours of single-player game play against computer AI opponents that will challenge players of all skill levels. And there's an entire metagame of Planeswalker decks for you to wield, whether you're challenging your friends (or strangers) to a duel, three- or four-player multiplayer, or a Two-Headed Giant game, all on the Xbox LIVE Arcade (XBLA) network. Oh and then there's a collection of new Magic: The Puzzling–style challenges, and there's ....

In short, Duels of the Planeswalkers is the total package. It's got great graphics, great game play, and great formats, and it's coming to the Xbox LIVE Arcade system soon. Really soon—in English, French, Italian, German and Spanish versions.

Duels of the Planeswalkers game play starts with two of the core decks (Chandra and Garruk) at your disposal. If you're new to Magic: The Gathering or Xbox or just want a refresher, you might want to start with the tutorial. Otherwise, try the Campaign game. You'll find that as you successfully complete challenges you'll unlock additional cards, which you can use to customize your deck. Defeating Planeswalker challengers in the Campaign game is special—not only do you unlock additional cards for winning, but you'll have the opportunity to unlock all eight playable decks. Once you defeat the deck's owner, that is ....

If you'd like to play a match with a deck you haven't unlocked or against an opponent you haven't gotten to in the Campaign, you can set up Custom Duels against AI opponents. In Custom Duels you can make the games more or less difficult by adjusting the standard settings (life totals, starting hand size) for an extra (or reduced) challenge.

There's also a series of nine Magic: The Puzzling–style puzzles, where you have a difficult situation and need to win the game in a turn (or two). However, this is a digital puzzle—you don't just mentally figure out the puzzle, hope you're right, and wait for the solution to be published sometime in the future. In Duels, you attempt your solution in-game. If you're incorrect, the AI opponent can demonstrate the counterargument, but you can always attempt the puzzle anew. 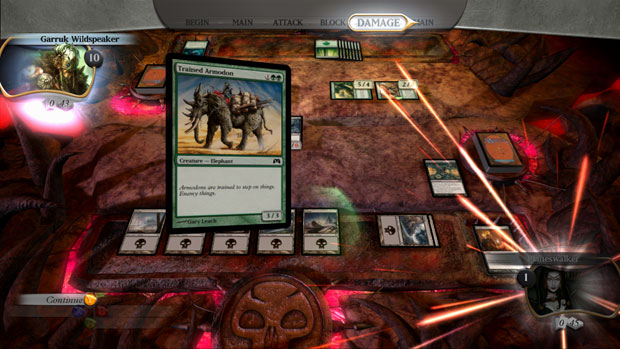 Another exciting option is cooperative play. Cooperative play allows two players to play under the Two-Headed Giant rules, as a team, from a single console. As a matter of fact, Duels provides an entire cooperative Campaign game against AI opponents. If you'd prefer human challengers, you can play cooperative games on Xbox LIVE with your friends against other teams in ranked and unranked matches. However, you can only play with the cards and decks you've earned!

Duels of the Planeswalkers also provides free-for-all multiplayer play. Two-, three-, and four-player free-for-all matches are available, with opponents selected from your friends, matched via the Xbox LIVE matching system. 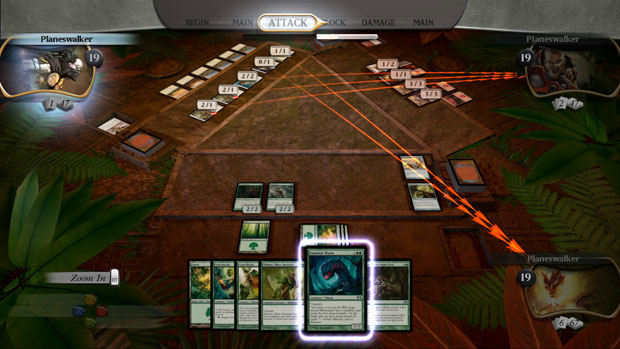 Duels of the Planeswalkers also delivers a full suite of fun learn to play options. Duels being a digital game allows us to teach the rules of Magic in a controlled, fun environment. This can easily be seen from the Duels tutorial. Instead of reading a wall of text in a rule book, you just start playing the tutorial. The AI guides you through your first game, but you're playing Magic from the very start.

But we don't stop there. Beginners will receive helpful hints in real time. These hints range from pointing out a creature with special abilities that you might not want to block, to reminders of things that newer players often forget (like playing a land). These hints, as with all new player features (like pausing spells your opponent plays so you can read them), can be permanently turned off once you're comfortable with Duels and with Magic.

The interface of Duels has been designed to make it easy for new Magic players while improving the experience for established players. The Duels interface uses the AI to identify cards that are eligible to be cast (which are then outlined in gold), and there are many subtle interface elements to improve the play experience of players of all skill levels. For example, you'll find that if you play a creature enhancement spell by default it will target the choice the AI believes is most appropriate.

If you're the type of person that would rather learn from another player, or if you're interested in teaching a friend (or even a stranger) to play Magic, Duels has a Mentoring system. In the Mentoring system you can pair up with a friend (or a volunteer) that will play a game of Duels with you, with the ability to observe your hand. This creates an experience similar to how many players have learned to play Magic—face-to-face—only this time it's mediated by a mouse and a headset.

For the person who does prefer to read game rules, Duels includes a digital Magic rulebook and glossary. If you want additional details while playing, all cards have a "more information" screen. This "more information" screen not only explains the nuances of the card in question but also provides information on temporary effects (e.g. summoning sickness) that are active on the card being reviewed.

So, if you're looking for a great way to learn Magic: The Gathering or teach Magic to a friend, Duels is a great choice! 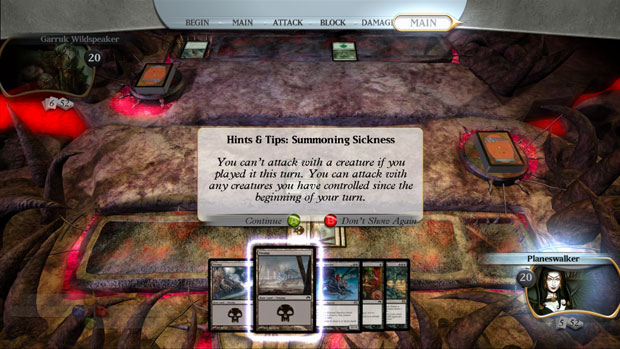 Duels of the Planeswalkers is fully integrated into the Xbox LIVE system. As mentioned, Duels uses the TrueSkill ranking and matchmaking system. Duels is also part of the Xbox achievement system, with 12 achievements (200 points worth). These achievements range from defeating certain special opponents to accomplishing unusual game conditions.

Duels is also part of the Xbox LIVE Marketplace, providing additional theme and picture packs so you can sport a Magic: The Gathering look on your Xbox while playing Duels or other Xbox games.

Duels and Magic: The Gathering

Magic: The Gathering is a trading card game and Duels of the Planeswalkers is a digital game. As such, certain interpretations had to be made. For example, new cards are earned by completing challenges. You can unlock cards through Campaign play vs. AI opponents, matches against other XBLA players or by playing cooperative/multiplayer games. The entire Duels card set (around 280 cards) can be unlocked by winning challenges.

Other changes involve pacing of the game. Duels is a faster-paced game than paper Magic or Magic Online. The heuristic of "tapped out means done" is built into the default game settings. Duels has a certain amount of twitchiness that isn't in paper Magic, with a short window of decision to play spells or abilities in response to game actions. Player vs. player matches have a turn timer that keeps the pace of the game going. 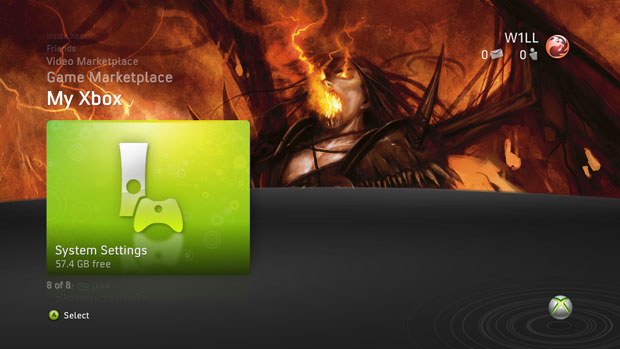 When we made Duels of the Planeswalkers, we built it in Magic R&D as a paper format then we took those cards to digital. The Duels format is composed of balanced preconstructed Planeswalker decks, similar to Duel Decks: Jace vs. Chandra but with eight different decks to choose from. We extended this idea by providing a sideboard that allows deck customization but still keeps each deck's flavor and also keeps them balanced against the rest of the metagame. We know you'll enjoy playing Duels—hopefully as much as we enjoyed creating it. 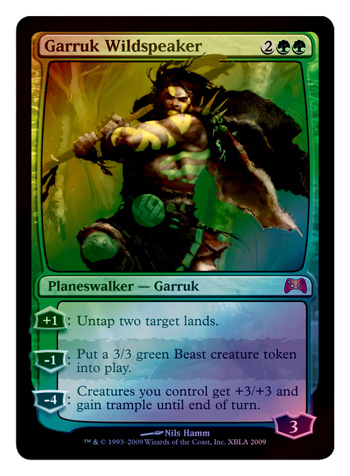 If you're up to the challenge of Duels, you might receive one of these. Redemption details are based on locality of purchase. More information is available at www.duelsoftheplaneswalkers.com, along with further information about Duels of the Planeswalkers.