the first time ever, a magicthegathering.com preview card is a reprint. Today's Fifth Dawn card is… Vernal Equinox!

Pretty neat, huh? As we all remember, this was both a casual and a tournament powerhouse when it came out in Mercadian Masques. Yet despite its metagame-warping power, the powers that be saw fit to bring it back for another go-round. I suppose the time was right.

But wait! I have the unparalleled power of the Internet Columnist! There's a clause in the fine print of our contracts that allows us to change cards at the last minute. No one else seems to have realized this, and my egregious actions today will undoubtedly force the loophole to be closed, thus spoiling everyone else's fun. Sorry, Adrian. Sorry, Anthony. Sorry, other columnists whose names I haven't bothered to learn. But Vernal Equinox isn't going to cut it.

? As if. How about if we can put it into every deck, not just green ones?

it is. This mandates it becomes an artifact instead of an enchantment, which seems reasonable for the block.

Now that it's not green, it doesn't need green's wussy “let's share everything” mentality. No parallelism here. I get the effect. Me, me, me. None for you.

Lastly, I'll change the name to something bizarre, obtuse, and sun-related like every other Fifth Dawn card. Ready for the real preview card? 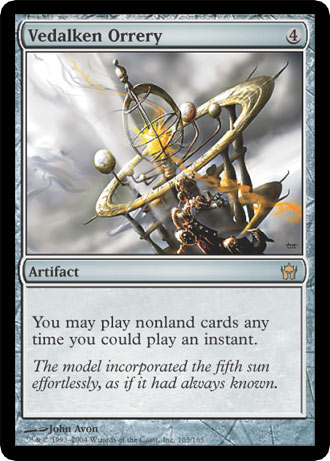 That's better. I can't take sole credit for this card (or any credit at all, really). Mark Rosewater tells me that the play-sorceries-when-you-can-play-instants card was the single most popular submitted idea for You Make the Card 2. None of those submissions made it through to the second round because (and I know you won't believe this, but it's the truth) Vedalken Orrery was already in the set.

Now comes the interesting part. What in the name of Barktooth Warbeard do we do with this thing? I have no idea. Well, I have some ideas, but I haven't had this much trouble wrapping my head around a preview card since I was given Upwelling a year ago. The Orrery fundamentally warps the game nearly as badly as it warps your tongue as you try to pronounce it.

The ability to play creatures at instant speed is an excellent defensive technique. As long as your lands are untapped during combat (and they should be), your opponent can't safely attack you for fear that a Simian Grunts or a Tangle Spider will jump out to block! Hmmm, maybe those weren't the best examples. OK, an instant Clone or Duplicant might jump out to block! Gloomdrifter can be a nasty surprise. Any gating creature picks up Fleetfoot Panther's ability. But even something as simple as a Trained Armodon can be devastating to your opponent's plans.

The ability to play enchantments and artifacts at instant speed is not too thrilling. You can pull off some interesting tricks (speedy Spirit Link is good; Timesifter is much better if it comes out on your opponent's turn instead of your own), but for the most part, the Orrery just lets you keep your options open. You don't have to play anything until the last minute. Tap mana only when necessary, and you'll be in prime position to react to every move your opponent makes. With an Orrery on the table, you should almost never cast anything at any time other than your opponent's declare attackers step and your opponent's end of turn step. You can minimize the times you're vulnerably tapped out.

The most exciting use for Vedalken Orrery is to turn your sorceries into instants. Remember Sorcery Week? Remember all the talk from the designers and developers about the crucial importance of power levels, timing considerations, and game balance? Well, all it takes is a 4-mana artifact to throw that malarkey out the window. Where's your “health of the game” now, Rosewater and Forsythe?

Let's imagine a world in which Echoing Ruin is playable as an instant. As is Merchant Scroll. As is Assault/Battery. And Battle Screech! And Diabolic Tutor! And Threaten! And all those sorceries with storm—you all wanted Temporal Fissure to be an instant, right? Now you can find out firsthand why it isn't one.

One of the sorceries that gets the biggest power boost by becoming instantaneous is Skulltap. As it stands, you get 2-for-2 card advanta—er, card parity. But if you could use Skulltap on your creature after combat damage was dealt, or when it's been targeted by Shock, you're ahead of the game. Use it on a creature with a leaves-play effect, and you're in pretty good shape. (Note that if you use Skulltap on Mindslicer—which has some poetic logic to it, since you need to tap the skull before you can slice the mind—you draw the two cards from Skulltap after everyone discards their hands.)

Nim Abomination is much less antisocial at instant speed, since putting it into play on your opponent's turn lets you avoid the otherwise automatic loss of 3 life. Surprise Nekrataals can't be bad, and spot removal is flat-out more powerful when you have the leeway to do it absolutely any time you want.

So the Orrery seems interesting, right? The ability to play Trade Secrets on my opponent's turn—when he has to discard down to seven cards after it's over, but I don't—is appealingly tricksy. But while tricksy is good, evil is much, much better. Like I said, I don't have a strong grasp of this card yet. I expect to receive Vedalken Orrery combo decks from you goofballs in the upcoming months. (Though please don't bother until the set is released. Any email that starts “I saw these cards got leaked, so I thought I'd make a deck” gets deleted faster than a side of beef at a vegetarian convention. Building decks off of leaked cards reminds me of the time an unnamed Internet writer—because I forgot his name—spent a half a page of an early card-by-card review ranting about how stupid the upcoming Nemesis card Angelic Favor was. How could Wizards print that card without some sort of “only during combat” clause??? What were they thinking?!??! They were ruining the game!!!!*$&*T!*! Of course, Angelic Favor does have that clause, but it wasn't included in the leak, thus prompting that writer to waste his time and look awfully foolish.)

The Orrery opens up the possibility for some hair-raising, nightmare-inducing, cheese-curdling stack tricks. I only have one so far, and it's bizarre. A tip of the cap to Aaron Forsythe for suggesting Balancing Act, and away we go…

In play, you have eight mana sources and Vedalken Orrery. Put eight mana into your mana pool. Play Gaea's Balance, sacrificing five lands as part of its cost. While that's on the stack, play Balancing Act! You're down to four permanents, and as soon as Balancing Act resolves, your opponent will be too. Then Gaea's Balance resolves, giving you five brand-spanking-new untapped lands. This would be a perfect time to play Temporal Fissure (coincidentally, a 5-mana card) to bounce all or most of the rest of your opponent's permanents. But if you don't have that, a Bringer is a fine back-up plan.

4 Lay of the Land 4 Sleight of Hand

Until next week, have fun with orreries.
Mark