elieve it or not, the plane of Zendikar was once a tranquil world.

The Eldrazi at Large

Long ago, the Eldrazi, world-predating entities native to the Blind Eternities, wandered the spaces between planes. Their nature is incomprehensible, ceaseless hunger; they devour the mana and life energy of any plane they encounter, selecting their next planar victim by some arcane, inscrutable intelligence. They are beings that transcend the colors of mana as we know them; in their native state, they have no physical form and no color alignment, existing only to feed. Roaming free in the Blind Eternities, Eldrazi were a scourge on countless planes of the Multiverse.

Three planeswalkers took action to try to destroy the Eldrazi. Ugin, the spirit dragon, fought the Eldrazi with his breath of invisible flame, using his knowledge of colorless magic to match the Eldrazi's colorless nature. The vampire planeswalker Sorin Markov brought his familiarity with magic that leeched life energies. Once those two confronted the Eldrazi, a third planeswalker, a stone-shaping lithomancer, planned to force them into physical form and then destroy them utterly, ridding the Multiverse of the monstrosities. 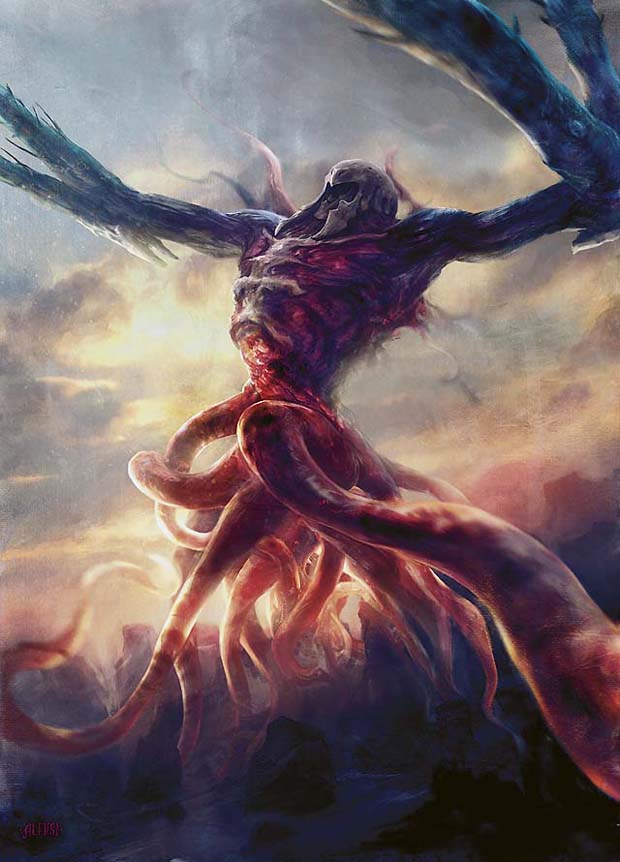 But their plan failed. The Eldrazi were too immense, too aberrant, and too powerful to destroy directly, and the planeswalkers were forced to consider a desperate course of action. Although they couldn't kill the Eldrazi, they could imprison the astral abominations on a single world and throw away the key, cutting them off from the Blind Eternities and preserving the rest of the Multiverse. The world they chose would be in danger of utter destruction by the ravening, thoughtless Eldrazi, but the planeswalkers decided that the sacrifice would be worth the salvation of all other planes.

In order for their plan to work, they needed a world.

They found a plane with lush ecosystems and uniquely dynamic mana—a powerful lure for the Eldrazi's insatiable hunger. They found Zendikar.

The three planeswalkers went to work to trap the Eldrazi monstrosities Emrakul, Ulamog, and Kozilek on Zendikar. Sorin Markov directed the Eldrazi's appetite toward the plane, luring them in with the promise of feeding on Zendikar's delectable energy. The invisible breath of the spirit dragon Ugin blunted the Eldrazi creatures' counterattacks, and he used special colorless magic to bind them to the world. The lithomancer constructed a massive network of stone diamonds called hedrons, whose power would form the bars of a planewide prison, forever preventing the Eldrazi from leaving.

The planeswalkers concentrated the power of their imprisonment spell in a secret location deep inside Zendikar's mountains of Akoum: a subterranean chamber called the Eye of Ugin. To make sure that the imprisonment would not be broken, the three planeswalkers sealed the chamber with a kind of mystical lock: the Eye of Ugin could only be reactivated by the presence of three planeswalker sparks—and the colorless, invisible breath of Ugin, the spirit dragon himself. But even in dormancy, the Eldrazi's hunger grew, and the prison's hold proved tenuous. Several centuries after their imprisonment, the Eldrazi colossi tested the bars of their hedron prison and came close to breaking free. They rose and fed on everything around them, turning their callous destructive powers on Zendikar's mana and lifeforce. Their awakening spurred a teeming host of lesser Eldrazi drone-creatures into existence: the brood lineages, one lineage for each of the three Eldrazi titans that spawned them, each possessing the same omnivorous craving for life and energy.

The Eldrazi legions devastated Zendikar. The greater Eldrazi emanated a radius of destruction wherever they went, annihilating all life and mana in their path, absorbing the lifeforce of the lush natural world of Zendikar. The lesser Eldrazi tore through Zendikar's civilizations, reducing them to ruins with terrible speed. 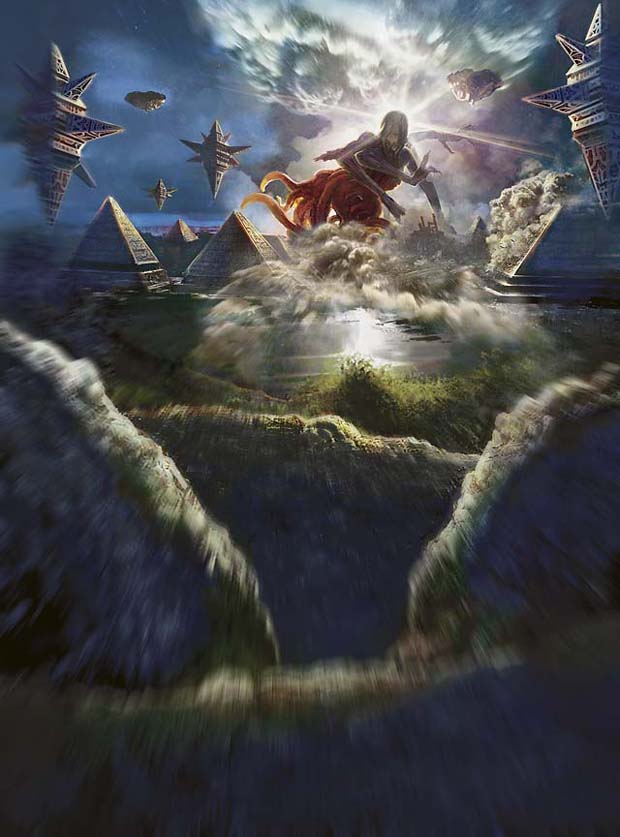 Sensing an affinity for the blood-draining vampires of the plane, the Eldrazi took the plane's proud vampires as a race of servants, adapting their very anatomy for servitude. Hooklike horns grew from the vampires' shoulders, convenient handles for the Eldrazi to dominate their slave race and, for millennia afterward, carnal symbols of the vampires' heritage of persecution. The vampires, forced to conspire in the campaign of destruction against their own homeworld, had their identity and tribal memory scarred forever. 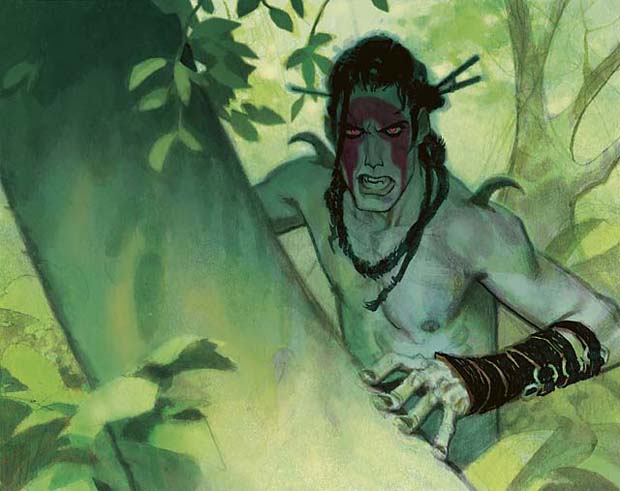 The Eldrazi, their brood lineages, and their vampire slaves ravaged Zendikar, nearly reducing it to a lifeless wasteland. But the magic of the Eye of Ugin held, restraining the Eldrazi colossi from reverting to their ætheric forms and leaving the plane. The three planeswalkers returned briefly to reinforce their spell, returning the Eldrazi colossi to torpor once again. They disbanded again once they were sure there was no danger the three Eldrazi would escape the planar prison. But the brood lineages—the swarms of lesser Eldrazi—remained, and fed.

Left to its own devices, the plane reacted. As thousands of sentient beings perished, the land of Zendikar itself fought back, stirring to life like a gigantic immune system to fend off the Eldrazi menace. Foreshadowing the much more dramatic Worldwake that would come thousands of years later, the land developed measures to protect itself from the Eldrazi: natural traps, ferocious creatures, land elementals, and the dynamic force of the Roil. 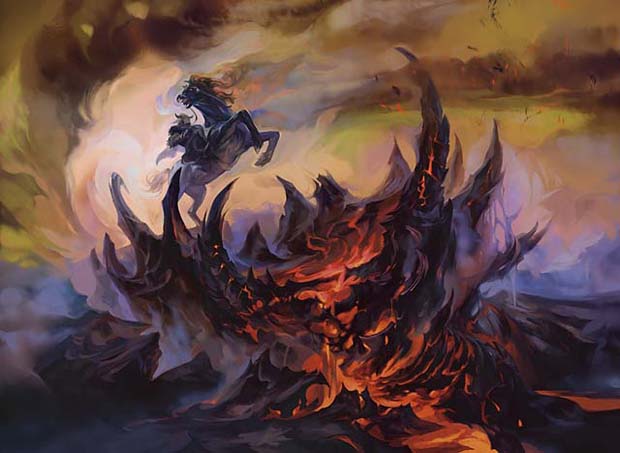 Thwarted by Zendikar's instinctive backlash, the Eldrazi brood lineages died off, leaving the three Eldrazi leaders to their slumber. Life on Zendikar slowly recovered, and the destruction wrought by the Eldrazi passed into the fog of memory.

But the threat of the Eldrazi remained, forever lurking just under the surface. Adapting to the dimly sensed threat, the ecosystems of Zendikar continued to transform, becoming even stranger, fiercer, and more volatile.

Thousands of years passed, and the Eldrazi waited.

Over time, Zendikar has developed a reputation as a deathtrap, a world humming with disproportionate peril. Its magic-infused lands and uniquely potent mana are still coveted by planeswalkers, but its magical defenses remain deadly. Zendikar is a world of adventure, its perils underscored by the long-forgotten Eldrazi lurking below. Entire religions have been shaped by the dim memories of Emrakul, Ulamog, and Kozilek. Evidence of their ancient hedron prison remains to this day, and the strange power of sites formerly dominated by the Eldrazi still baffles adventurers. Archaeologists and scholars such as the ruin sage Anowon have tried to chase elusive myths to learn of Zendikar's past. But after the crumbling ages since the Eldrazi last fed on the plane, few clues remain.

During all that time, the Eldrazi grew in power, waiting for the day that they would be released—at least to rampage across Zendikar again, if not to be free of their prison entirely and return to the Blind Eternities. But they remained sealed away. The magic of the Eye of Ugin held fast.

Then a certain elder dragon planeswalker took an interest in Zendikar. For reasons of his own, the ancient dragon Nicol Bolas, Planeswalker looked in on the plane, observed the Eye of Ugin, noted the abeyance of the Eldrazi, and disappeared again. 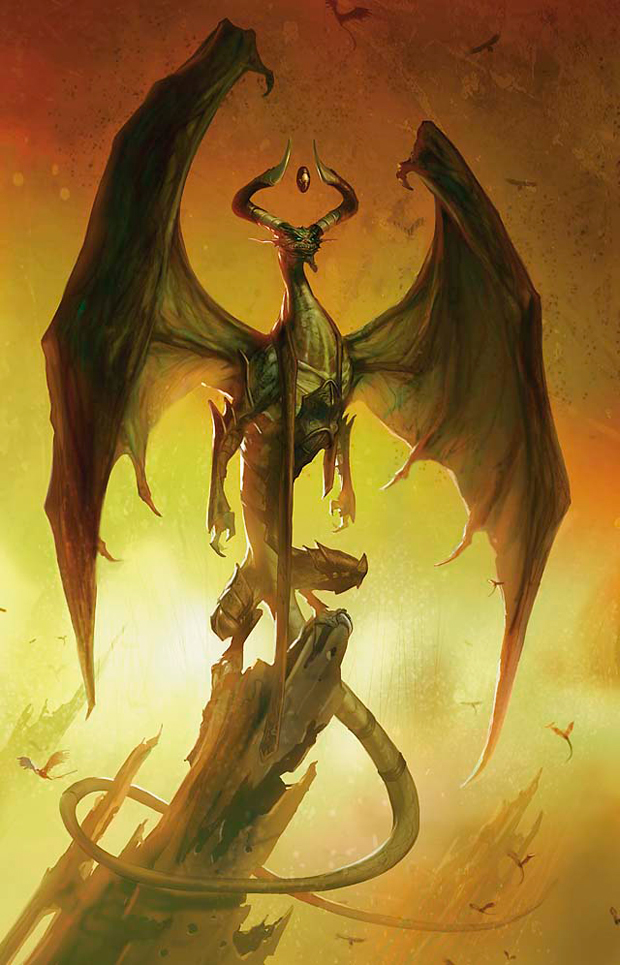 Some time later, Nicol Bolas, Planeswalker sent one of his minions on a special mission to Zendikar, to attend to the Eye of Ugin. This brings us to a small but crucial puzzle piece in this story: the planeswalker Sarkhan Vol.

The dragon-worshipping shaman Sarkhan Vol has undergone some life changes of late. We last saw Sarkhan among the shards of Alara, where he was searching for an exemplary dragon powerful and ferocious enough to be worthy of his devotion. What he ultimately found was the ancient, evil planeswalker Nicol Bolas, Planeswalker, a dragon that radiated such power and majesty that, even against the warnings of his instincts, Sarkhan felt compelled to pledge his fealty to him.

That decision will weigh on Sarkhan's destiny forever.

For his own mysterious reasons, Bolas sent Sarkhan to Zendikar, a world Sarkhan had never visited, to find and guard the Eye of Ugin, a strange chamber Sarkhan had never heard of. Sarkhan found the place and stayed there, and fended off a few odd explorers here and there—but spent most of his time alone, surrounded only by ancient hedrons and the apparitions of Zendikar's past. Sarkhan has fallen into a pit of his tormented thoughts, his mind slowly detaching from reality. 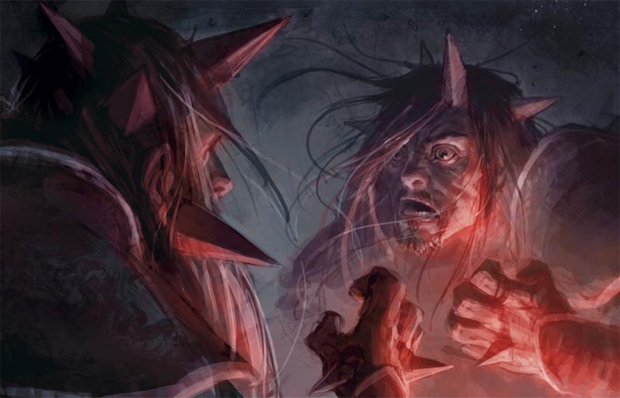 How many days or weeks has it been here in the Eye of Ugin chamber, he wonders? Is he hearing voices echoing from the hedron-encrusted walls, or is it just the reproving echoes in his mind? What is he to make of these visions—has he solved some deep mystery of this draconic catacomb, or is he prettifying his own descent into psychosis? What could his master's purpose in sending him possibly be, and what inscrutable force does the magic here hold at bay? How could he have agreed to come to this place, to guard an empty tomb from clueless wanderers? How could he ever have consented to serve that dragon, that flameless tyrant who peers straight through his skull?

These are the questions that plague the dragon-shaman as he .

The Struggle in the Eye 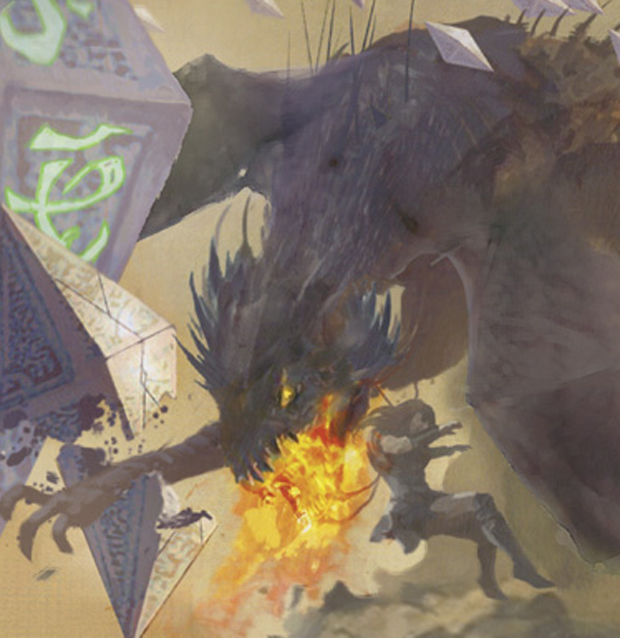 Besides Sarkhan the Mad, two other planeswalkers made their way to the Eye of Ugin. The pyromancer Chandra Nalaarfollowed a mysterious scroll map to Zendikar. She sought the legendary Eye of Ugin, thinking it would be a valuable artifact. Jace Belerentracked Chandra to the same location, and intercepted her inside the Eye chamber just as she encountered Sarkhan the Mad. Sarkhan, knowing his master had instructed him to protect the Eye from intruders, engaged the other two planeswalkers by taking draconic form. But his efforts were not enough to stop the inevitable.

Thousands of years ago, three planeswalkers had built the Eye of Ugin to imprison the Eldrazi. And when events conspired to bring three planeswalkers to the Eye of Ugin again, the mystical chamber surged back to life. Ugin's colorless flame was the final piece to the puzzle of the Eye chamber—and Jace and Chandra's discovery of Ugin's power of ghostfire turned those last tumblers. All the elements were present once again. The mystic lock has clicked.

The old magics have loosened. The binding spells have come unraveled. The hedrons have begun floating to life, assembling strange interlocking superstructures in the sky. The explorers and adventurers of the world look on in wonder as Zendikar senses the impending threat and awakens, its ire aroused once more. The land thunders and roars to life in the most savage Worldwake the plane has ever seen, a sign of the annihilation it senses is just around the corner.

For Zendikar knows what is upon it. After thousands of years, the imprisoned abominations have come again.

The Eldrazi have risen.