Glorious, glorious freedom! Like most preview weeks, I was assigned a specific card to glorify today. That card was Auriok Steelshaper. Making Vedalken Archmage decks without being able to leak any Mirrodin artifacts was tough, but I was able to do it a couple of weeks ago because hundreds of other artifacts have been printed before. Making Auriok Steelshaper decks without being able to leak any Mirrodin Equipment would have been a wee bit tougher. Urza's Saga was light on Equipment cards, if I remember correctly. Luckily, Randy wanted to preview the Steelshaper himself last week, and I was only too happy to accommodate. That left me in the enviable position of being able to preview any Mirrodin card I wanted. Here's what I chose. 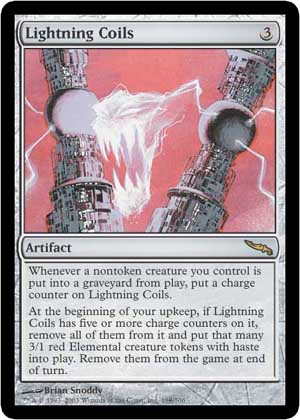 How amazingly cool is that? How awesome is that artwork? How sweet is it that when Lightning Coils spits out a swarm of Elementals, the artifact doesn't go away? (I had to reread it, because I was sure you'd have to sacrifice the Coils when it triggered.) How splendiferous is it that it only costs

to put out, and absolutely no mana at all after that? How frumpunctious is it (and yes, I'm so excited I had to start making up words) that multiple copies of Lightning Coils build up counters at the same time whenever one of your critters croaks?

The answer to all of those questions is VERY!

Of course, the card has its limits. It only gets a charge counter if a non-token creature is put into your graveyard. That means it won't degenerately feed off itself, but it also quashes potential combos with Soul Foundry or Riptide Replicator. Also, while Lightning Coils triggers each time a creature goes to your graveyard, the Elementals it creates do not go to the graveyard—they're removed from the game instead. So decks packed with “goes-to-graveyard” triggers, which seems like a fine idea, don't get a megabonus at the end of an Elemental-producing turn. And finally, the card is very fragile in an era when maindeck artifact hate should be quite common. Your opponent will snicker with glee after toasting your 8-counter Coils at the end of his or her own turn. Of course, you'll snicker with Sadistic Glee when the Coils actually goes off and zaps your opponent into next Tuesday, so it all evens out.

Some of you have already thought of a nasty combo: After you create a passel of Elementals, destroy Lightning Coils! Then you won't have to remove the tokens at the end of your turn, right? Wrong. The “remove from the game” clause is part of the effect that created the tokens. Even if Lightning Coils vanishes, the effect will finish up at the end of your turn. Sorry, folks!

So what cards make good combos with Lightning Coils? Before I get to actual decks, I'll toss out some ideas that I wound up tossing out. It's not that these are bad ideas; there's just a limit to how many decks I can make.

An instant that lets you draw a bunch of cards and sacrifice a bunch of creatures at the end of your opponent's turn. The Coils will pop each time it has five counters on it, and five creatures might be simple enough to block. Wouldn't it be better if the Coils had, say, nine counters on it?

Elementals? Wouldn't you rather have Ancestor's Prophet or Deathmark Prelate?

Each token the Coils spits out triggers the Legionnaire's ability. You could tap down your opponent's entire team, then swing in with mini-Ball Lightnings.

The Elemental tokens will fizzle out at the end of your turn . . . no matter who controls them. So why not grab your opponent's best creatures in exchange for shiny new (and very temporary) Elementals?

Deal twice the damage with your Elementals! Forget about that pesky attack step completely!

Remember When Goblins Were Fun?

Goblins used to be goofy, klutzy creatures. With some notable exceptions, they had more humor value than play value. What happened? Sadly, they went legit. They saw the spotlight of fame and cash prizes, and they sold out. Goblins are running rampant over the Standard and Extended tournament scene. They're in beatdown decks. They're in combo decks. A Goblin was just banned, for Squee, Goblin Nabob's sake! They're brutally efficient, and they're just no fun anymore.

Well, I'm here to say that Goblins can still be fun. Goblins fit well in a Lightning Coils deck because they just love to blow themselves up. (As I recall, they make funny little popping sounds when they die.*) The Spikes reading this will think that's a stupid idea. Goblins clearly don't need the help of Lightning Coils; that'll just slow the deck down. Exactly! In a casual play group, you'll get kicked out for playing a tournament-winning Goblin deck copied off the Internet. But that doesn't mean you can't play with Goblins. Just make a reasonable—and fun—deck. You're all just as sick of Sparksmith as I am. So I left it out. That's easy enough! Goblin Warchief and Goblin Piledriver are also sitting at home. Instead, I've got Goblin Assassin and Skirk Fire Marshal! They're goofy, they're underplayed, and they'll put counters on your Lightning Coils while clearing out potential blockers. Clickslither and Siege-Gang Commander will also turn Goblins into Elemental-tokens-to-be. And remember the mention of Wrath of God above? That's what Slice and Dice and Starstorm are doing here—but if you don't need them, you can just cycle them away. Hey, I never said this Goblin deck isn't brutal. I just said it's not the one everyone already plays.

Y'know what other race likes taking frequent trips to the graveyard? Zombies. (That wasn't a trick question.) There are a couple of black enchantments that make amazing combos with Lightning Coils. One is Death Pit Offering, one of my favorite Nemesis cards that I was pleased to see pop up again in Eighth Edition. The drawback isn't so bad when you'll get further use out of the creatures you tossed into the Death Pit, and aren't 5/3 hasty Elementals better than 3/1 hasty Elementals? The other enchantment is Death Match. (Basically, any enchantment that starts with “Death” is automatically cool.) If you and your opponent are knocking off each other's creatures all game, you'll eventually get the upper hand via Lightning Coils counters, as well as via recursion-friendly cards like Oversold Cemetery and Reaping the Graves. And imagine the annihilation wrought by your wave of Elemental tokens! Blockers? What blockers? Those enchantments work well together: When your 2/2 creatures are really 4/4 creatures, your opponent can't easily Death Match them away.

Self-recursive creatures fit nicely in this deck. Aphetto Vulture can keep coming back, Rotlung Reanimator will leave a buddy behind when it croaks, and Doomed Necromancer can pull a friend back into the fray. All of these interact nefariously with Death Match, and the Rotlung-Offering interaction is superb. Ghastly Remains is especially evil: Just don't bother to amplify it! When it comes into play as a 0/0 creature (assuming the Offering isn't on the table), it will trigger Death Match's ability, then it will immediately die, triggering Lighting Coils' ability. And you can regrow it for more fun every single turn.

Life is like a brick wall: It's big, it's hard, and it hurts to run headfirst into it. Just a little philosophy from my idealistic high school days, when I was much less cynical than I am now.

But why trash Walls? To draw cards, of course. You don't often see a tribal triumvirate of Goblins, Zombies, and Walls, but that's what rounds out my column today. Wall of Mulch makes it profitable to sacrifice your Walls, since you get a card out of it. Add in Fecundity, and you get two cards out of it. And, of course, add in Lightning Coils, and you get a charge counter as well. What are you digging for? A way to turn those ex-Walls into offense. Caller of the Claw can do it, if you sacrifice enough Walls on the same turn. Tribal Forcemage or Tribal Unity can do it, if you feel like pumping up your Elementals or Bears. My favorite trick is Day of the Dragons, though. After you've turned your blue and green Walls into red Elementals, further evolve them into red Dragons! The Elementals are slated for extinction anyway, right?

2 Day of the Dragons 4 Fecundity

The Elvish Scrappers provide plenty of bang for the buck. Sacrifice one to get a future Elemental (Coils), draw a card (Fecundity), make a Bear (Caller of the Claw), and blow up one of your opponent's pesky Mirrodin artifacts. There will be lots of them out there. Lightning Coils, perhaps?

Until next week, have fun with 3/1 red Elemental creature tokens with haste.

* OK, I remember Skirk Prospector's flavor text so well because I wrote it. There—you made me shamelessly brag! Are you happy now??? (back)