appy Fourth of July from the future! And welcome to Enchantment Week. Ah, enchantments! They're easily my second- or third-favourite type of nonland permanent.

Of all the card types, enchantment might be the Johnniest. For "proof," look no further than the list of cards I've previewed here: Simic Guildmage, Mishra, Artificer Prodigy, Paradox Haze, Hypergenesis, Retether, Null Profusion, Spellweaver Volute, and Gibbering Descent. Almost all of them are enchantments or friends of enchantments. Luckily, there are still a ton of complete Johnny-fodder enchantments out there, so let's get to it.

By now, it's no secret that I like to put pants on my weenies. Show me a Grizzly Bears with an ability and I'll show you the Griffin Guide and/or Elephant Guide or the Moldervine Cloak and/or Armadillo Cloak that I will put on it the following turn. Don't laugh! As a strategy, it works. Just ask the winner of last weekend's Grand Prix in Montreal.

Future Sight gave us Daybreak Coronet, the latest of the super-auras. For a measly two mana, you get a quasi-Armadillo Cloak, a Lance, a Vigilance, and some aura that gives a creature +1/+1. That's a hell of a package deal. The only catch is that you can only put it on a creature that already has an aura attached to it. That's just asking to be three-for-oned. The inherent riskiness of the card should come as no surprise, since the word "coronet" comes from the French and means "all your eggs in one basket." Can someone fact-check that? Try the Oxford Encyclopedia of Made-up Junk. I'm sure it's in there.

So Daybreak Coronet helps the rich get richer, while at the same time threatening to bankrupt you completely. Sounds like we're comfortably within the boundaries of Johnny-Timmy Land. In order to minimize the risk of the Coronet, there are a few things we can do. Okay, one thing. We can play with creatures with the Troll Ascetic version of shroud, so that gives us the Troll, Silhana Ledgewalker, Plated Slagwurm, and anything with a Shielding Plax on it. If you use the Plax, you've even got the first enchantment covered! You're all set for Daybreak Coronet to be Day-broken. For variety's sake, I'm going to avoid green and forego the use of all but the Plax (which is also a blue card). To make sure my creatures get Plaxed in a timely manner, I'm going to use Auratouched Mage and, to a lesser extent, Zur the Enchanter.

The other Future Sight aura that I'm particularly fond of is Snake Cult Initiation. For four mana, you can turn a lowly Woodland Druid into the most poisonous creature in Magic history. Take that, Marsh Viper! Auratouched Mage can easily undergo a Snake Cult Initiation, but Zur will have to join some other strange club with weird admission guidelines. I hear Wombats have interesting cults as well.

Picture, if you will, the ideal creature to enchant with Snake Cult Initiation. To take advantage of the poisonous ability you need the poisonous creature to deal combat damage. Evasion would be nice, either flying, or shadow, or just plain unblockability would be nice. Double strike would also be a nice trait to have, allowing your creature's poisonous to kick in twice per combat step. The aura costs four, which is a pretty big investment, so you don't want a creature that is too fragile. Something like protection from red, shroud, or an abnormally large butt would help out immensely. Last of all, you want a creature small enough to make the poison kill necessary. Dragon Tyrant fits the first few categories, but a 6/6 flying double striker kinda makes winning with poison counters redundant. If only there was a more appropriate creature. Oh, that's right, there is. I have seen the future of my Snake Cult Initiation deck, and its name is Jodah's Avenger.

The deck can win one of two ways: either through Daybreak Coronet-fuelled beats or poison. Besides Auratouched Mage and Jodah's Avenger, Looter il-Kor and Spirit en-Dal make excellent targets for you auras, especially Snake Cult Initiation. Later in the game, Retether can turn any of your shadow guys into killing machines by bringing back all of your spent SCIs. Since poisonous is cumulative (i.e., four instances of poisonous 3 will result in twelve poison counters), one hit from a quad-poisonous Looter will cause instant death. Here's the deck:

Workin' on our Night Dealings

Back when Champions of Kamigawa hit the scene, resident mad genius and future Rules Manager Mark Gottlieb previewed a card that he described as "Planar Portal meets Talon of Pain." The card is Night Dealings, and you can read about it here. 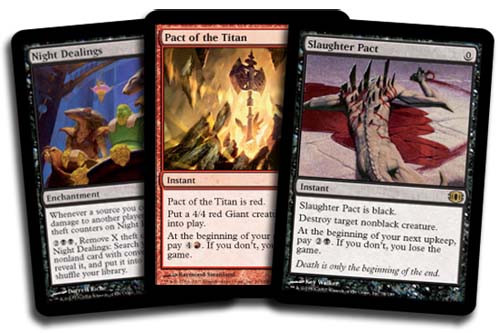 Well, wouldn't you know it? In the last three years, there have been some new developments in Magic. It just so happens that reader Arjan van H. (a.k.a. Jorael) has been cooking up some neat Night Dealings decks in his laboratories way up (down? to the right?) in Groningen, the Netherlands. In response to my Kicker Week article, Arjan sent me a deck that combined the converted-mana-cost-based tutoring power of Night Dealings with low-converted-mana-cost-having Breath of Darigaaz. If that were all, I wouldn't be writing about the deck right now. Arjan's cool idea was to use Night Dealings to fetch the Future Sight Pacts. Since they have a converted mana cost of zero, you can tutor for them without having to spend any theft counters.

Arjan used Slith Bloodletter for early offense and defense. Korlash, Heir to Blackblade is a late-game monster who also helps you ramp up your mana (Night Dealings ain't cheap!). Both of these creatures regenerate, so they can survive an early Breath of Darigaaz. You only need to remove three theft counters to fetch Maga, Traitor to Mortals, which Arjan included to get around cards like Worship and Circle of Protection: Black.

I made a few tweaks to Arjan's deck, to make it legal in Extended and to add in another cute enchantment-based combo. The cards are Hunted Horror and Grave Peril. A neat thing about Grave Peril is that it destroys creatures without ever targeting them. This, believe it or not, means that you can use it to kill creatures with protection from black, like the centaurs produced by Hunted Horror. Yes, my centaur friends, you can face a little peril. This seems like as good a deck as any for Hunted Horror, since a kicked Breath of Darigaaz will also fry the centaurs and the token from Pact of the Titan can squish centaurs in combat. Here's the slightly altered version of Arjan's deck:

3 Slaughter Pact 3 Pact of the Titan

3 Pact of the Titan 4 Breath of Darigaaz

Another subset of cards that you can fetch with having to use theft counters is the cycle of no-mana-cost suspenders from Time Spiral. I was thinking of adding Living End and Wheel of Fate to Arjan's deck, but I decided to save them for the next one.

The Rigger They Are…

I think it's pretty much a rule that you have to hate your boss. This is true no matter no what your job is. Now, imagine that you flogged steam for a living. Once you wrapped your head around the fact that you ended up in such a bizarre career, wouldn't it be hard not to just loathe your boss, some guy sitting in the little metal pod-thingie who was, like, flogging you all the time? It seems to me that a little ill will would be justified in this case. As we all know, Steamflogger Boss is perhaps the most maligned creature of all time, due to its currently meaningless rules text about "contraptions."

If you're not assembling contrabulous fabtraptions, you've gotta admit that Steamflogger Boss is a pretty decent "lord," sort of a cross between Sosuke, Son of Seshiro and Goblin Warchief. At least, he would be a pretty good "rigger lord" if there were any other, you know, Riggers in the game (besides Mistform Ultimus). At this point, you are probably wondering, What does the king of the flogosphere have to do with Enchantment Week?" Well, the answer is simple. We can solve our Rigger-less situation with Conspiracy, an enchantment designed to help one terrible tribe (Mercenaries) that can now help another!

The deck has a ton of ways to make tokens, which will become little Riggers as long as you have a Conspiracy on the table. Skirk Ridge Exhumer and Sparkspitter, Mogg War Marshal and Sengir Autocrat, Endrek Sahr, Master Breeder and Sarpadian Empires, Vol. VII, Kher Keep and Urza's Factory. Perhaps my favourite Rigger comes from Dark Depths. Marit Lage is just so much cooler with +1/+0, haste, and a goblin with a steam-powered flogging maching bossing him/her/it around.

I'm using Wheel of Fate and Living End to recreate a little of that old Goblin-Bidding fun, with Steamflogger Boss in the role of Goblin Warchief. The Wheels, along with the Exhumers and Sparkspitters, help to fill up your graveyard with creatures for the eventual Living End. If you don't like that plan, you can just use Endrek Sahr, Master Breeder to make tons of Rigger tokens. With Conspiracy and Endrek on the table, you can play Steamflogger Boss and make four 2/1 Rigger tokens with haste. Sengir Autocrat will give you six points of hasty power, and best of all, won't take his Serf tokens with him when he kicks the bucket (because there won't be any Serf tokens!). Here's where I ended up:

Until next time, keep on flogging.