The End of the Debate?

Red Decks Wins players will tend to fall into two camps. There are those that will spend four or even eight main deck slots on three-mana land destruction (usually with some kind of an upside... say the 2 damage of a Molten Rain or the flexibility of killing a Platinum Angel, as with Pillage), versus those who would rather just forget about it and play a set of Volcanic Hammers there, maybe a couple of guys, a couple of Shocks. Both camps have top players and red deck designers among their adherents, and both camps have compelling reasons why they would—or would not—go in a particular direction regarding these Stone Rains.

One side favors speed and consistency. After all, you don't want to draw a Pillage after a long stretch of topdeck attrition, nor when the opponent is on 2 or 3 life near the end of the middle turns, where your chances to win are waning but not gone altogether. They have fewer blowouts and worse middle turns, but probably win more gray area games that can go either way.

The other side has a tremendous potential for tempo-oriented blowout games. After all, Mogg Fanatic, Keldon Marauders, Cryoclasm... You can't really curve out much better with an aggressive deck against a hapless and vulnerable dummy. That third play is probably good for 3 damage, and a Time Walk, and will keep the opponent from mounting a defense—let alone a respectable offense—for at least another turn (provided he hasn't erected the stop sign already). And if he is actually having mana draw problems? Good night! The game might already be over, even if the 20th point of damage hasn't been yet dealt. On balance, they probably do worse in games that may or may not go their way when they start to go long.

So which is the right answer?

I imagine that neither side will shift entirely to the other side of that vast Red Deck aisle... but in the meantime, we have new card Fulminator Mage, which might be something that both camps can agree to play. 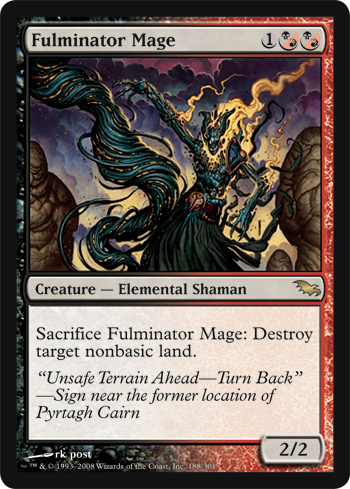 I had to read that one two or three times before I really comprehended what it was. It does what? It costs what?

Is it too good?

Will it even see play at all (I always ask myself this when a card seems exciting)?

That's quite the gap!

The first thing I look at when evaluating a new card is its mana cost; this one has a mana cost as much black as it is red, which matches nicely with two themes grafted onto Fulminator Mage. We have focused a little more on the red side so far, but the fact is that both red and black have long histories of tournament caliber land destruction spells on three mana, so Fulminator Mage seems... appropriate. I remember back to qualifying for my first Pro Tour, where in the long gone two slot PTQ days, the finals was an Icequake mirror match. Erik Lauer smashed my face, partly because I actually had Snow-Covered Swamps in my deck (but he also had me covered seven-to-three in Necropotence copies). Leading into the next Pro Tour, Brian Hacker played Choking Sands in his Swiss-leading Bad Moon Suicide deck in Dallas; I remember at the time wondering how badly the non-Swamp restriction on that spell would hurt him over the course of the tournament in such a black-heavy room. Finally, by the time we ran the first versions of Napster (Grudge Match and Northeast Regionals, not Nationals version) four years later in the spring of 2000 (has it really been so long?), black land destruction had shifted to the vanilla Rain of Tears... 1 damage extra or 2, it didn't matter, both Icequake and Choking Sands were a little too hardcore for Standard.

Well... Fulminator Mage is a 2, 4, 6, whatever extra damage waiting to happen!

So what do you cost a card like this? After Grand Prix–Philadelphia, a group of us were discussing how aggressively costed "the new Serendib Efreet" Vendilion Clique is. Josh Ravitz more or less ended it by saying that not only have they had 3/1 flying creatures for three mana (one less colored mana) than the Clique... but that such Airships had made the Top 8s of Pro Tours. I don't think there will be much debate on how aggressively costed Fulminator Mage is... He is very aggressively costed, easier to play than either Molten Rainor Choking Sands, and always at least a chump-block eligible creature (even when a land destruction topdeck wouldn't be great) and an actual threat otherwise.

The only caveat is that this guy is not a Strip Mine... "merely" a Wasteland. Unless deck styles change radically simply due to the Fulminator's existence (and you can look at formats before and after Wasteland itself has rotated in or out for this one), "Wasteland" will be just fine. The single-colored decks have plenty of Fungal Reaches, Academy Ruins, Pendelhavens, et cetera. When you read Fulminator Mage two or three times, did you notice that he doesn't need to tap, there is no limitation on sorcery versus instant speed, and so on? I can't wait to attack into a Mutavaultplus kill another land in a single combat!

So what about specific Constructed applications?

Despite Fulminator Mage being aggressively costed, I don't see it as an automatic inclusion in existing Extended beatdown decks. The Extended creature palette is very narrowly defined because for the most part, creatures are chosen either as big things in small packages (Kird Ape, Tarmogoyf, Countryside Crusher) or synergistic theme enablers (Tallowisp, Daru Spiritualist); Fulminator Mage is basically the opposite: it is a flexible halfway point between Grey Ogre and disruption spell, passable on the one side, but exactly what the doctor ordered on the other. I am perfectly willing to be wrong on this assessment, though! Gaddock Teeg is a good example of a creature that is basically an awkwardly costed Grizzly Bears... but made it into both the competitive Domain Zoo and spiritually theme-defined Green-White 'Wisp decks on the basis that it made life so difficult for those planning to break the game with Dread Return and Gifts Ungiven. 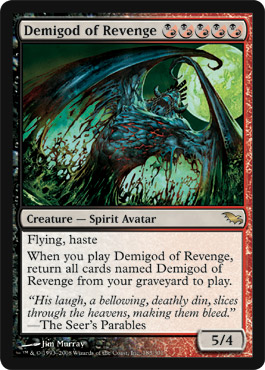 On the other hand, I see quite a potential gap for Fulminator Mage in Standard. It looks like Standard is going to be crazy mana costs left and right, with four times

old hat by the end of the first Shadowmoor-legal Magic Online Premiere Event Top 8. In a world with literally no color discipline, some of the best dual lands in history, and incredible incentives for accomplishing harrowing mana requirements, the ability to throw off even one colored mana—especially when attached to a chase rare dual land—can result in a domino effect of card advantage. Sometimes players look at the results of, say, a Cryoclasm applied to a Steam Vents and attribute a game win to "tempo" without really understanding what that means. Sure, the opponent might not have been able to deploy threats and answers at the same clip as the Cryoclasm player following such a demolished dual, but the real nuts and bolts of the problem is much simpler: When you can't play your spells, it's more or less like you didn't have them at all! That's the reason we all hate being mana-screwed. When you're stuck on two lands and your hand is full of three-mana spells... what's the functional difference between that and just being Mind Twisted into an empty grip? Exactly! You have a glimmer of hope on the one hand—you might be able to see a strip of daylight a turn or so off—but some of these land destruction–enabled beatdown decks are so quick and aggressive that there isn't much of a difference between mana screw plus Mind Twist and mere mana screw at all. Really, the only difference in many games is the frustration that comes with an unhealthy portion of hope.

So what about existing decks?

One of the top decks in Standard is Black-Blue Faeries. No, I don't think Fulminator Mage is going to be the one true answer to the Faeries problem... but it might actually be a nice non-Faerie asset to that tribe. Most Faeries decks we've seen recently play a minimum of 12-14 black sources (in order to ensure second turn Bitterblossom, their ace), so playing a

like Fulminator Mage is not a big stretch for the Faerie squadrons we have already seen. Now why might they want to try it?

One of the most solid answers to Faeries out of a deck that can offer additional resistance is Desert! It's not like Faeries scoops to Desert or anything, and both Scion of Oona and Mistbind Clique offer interesting and applicable solutions to the Desert problem... but why did you think that so many Faeries decks are willing to commit—already black-blue—to two or even two-plus copies of Pendelhaven? Desert can be annoying for a deck with sixteen-odd X/1 creatures, especially if the wrong ones get Rune Snag, Damnation, whatever. While it is not an obvious recruit for such a tribally focused theme deck, Fulminator Mage out of the side definitely seems like something worth testing for Desert suppression and general dual land demolition, especially against significantly slower control decks... There are numerous attractive curves that can be set up in the first three or four turns.

One of the other new decks to come out of recent Standard events is Black-Red Grave Pact. Bitterblossom is the card that Grave Pact never had before to provide a steady stream of bodies to trade with the better creatures on the other side of the table. With Greater Gargadon setting it all up (and ready to end the game quickly once it comes out), you have a build that Timmy, Jonny, and Spike can all love... and use to hate. Fulminator Mage is already in-color, and gives this deck yet another natural creature sacrifice outlet. A potential source of card advantage on its own, Fulminator Mage is a Plague Spores waiting to happen when

join hands and skip jauntily from the Red Deck Zone to that terrible, terrible graveyard.

Mannequin? I really don't see how traditional control can possibly hope to deal with Fulminator Mage plus Grim Harvest; it's basically impossible to beat in a long game.

My snap judgment slash final verdict? Fulminator Mage is undercosted, aggressive when it has to be, fits into some existing builds, ruins a good number of otherwise workable days, makes life difficult for those trying to play some of the new themes, and might just action a radical shift in the metagame from the ground (literally) on up. It actually just seems better and better the more I think about it.