The End of Time

sharks, here's what you've all tuned in for: 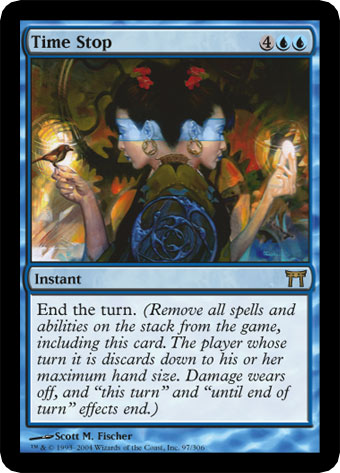 No really. Wow. Let's look at that again:

This card is really cool, refreshing, and new. Unlike a lot of cards whose effects have those kinds of adjectives associated with them (especially the last), Time Stop is also quite powerful.

Even with a card as interesting and new as Time Stop, one of our first instincts is to compare it to existing cards. The classic is of course Power Nine mainstay Time Walk. If all we get is a Time Walk, Time Stop is pretty poor. No one expects to see a functional reprint at

, but we can get a Time Walk out of Time Warp for one mana less than Time Stop costs. Sure, there is the exchange of sorcery to instant for one mana, but because most speed upgrades of this type end up involving primarily the playing of spells on the opponent's end step, Time Stop doesn't really benefit from that transition. There really isn't any point to stopping the turn when you are going to get it in a moment anyway. So when can we play the card so that it makes a good Time Walk?

Getting the most out of Time Stop (as a Time Walk) means playing it before the opponent can draw a card. That means playing the spell during the opponent's Beginning Phase. If the opponent is not blue, there isn't much harm in playing Time Stop during the Upkeep. You can stop a red opponent from drawing the last burn spell he needs to finish you, and you will generally muck up the creature- and sorcery-hungry plans of most green, black, and white mages with this kind of choice. Basically all the opponent gets is his mana untapped (which all of us know is significant), but what he will be able to do with it will be seriously restricted. Played in this way, we steal a draw and prevent an attack. We strand any number of non-instant cards in hand. The Upkeep is a good time to play a big spell like Time Stop against control opponents, too, because they will often be committing a lot of mana to plays like Eternal Dragon.

But Time Stop isn't just an expensive Time Walk. It's also an interesting permission spell. Usually, in order for a permission spell to be worthwhile, it has to cost less mana than the spell it is countering. Look at the permission that is currently available in Standard... Mana Leak is the headliner and it loses a lot of punch as the game drags on. Complicate is okay, but is increasingly poor as the game proceeds as well. Cards like Rewind and Last Word have interesting additional effects, but are played only because there aren't many hard counters in the format that can compete... Not since the loss of Counterspell, and to a lesser extent Circular Logic, anyway.

The reason we don't like to play permission that is more expensive than what we are countering is that if the opponent has just as much mana as we do, we can lose to his second threat. In the inaugural Extended Masters event, Jon Finkel -- one of the sharpest sharks Magic has ever produced -- had Forbid and Ophidian going against Trevor Blackwell, who was playing a mono-green deck. Sounds pretty great, right? With Ophidian fueling Forbid, Jon could conceivably counter every threat Trevor was going to play for the rest of the game... As long as he only played one threat per turn. The problem was that Trevor had Rofellos, Llanowar Emissary. Rofellos may not have been big enough to fight Ophidian, but the extra mana he produced allowed him to play more than one threat per turn, eventually sneaking past Jon's Forbid.

Time Stop prevents the opponent from being able to play more than one threat in a turn, at least once. If you use Time Stop as a counter, you counter the spell your opponent was trying to cast -- Dissipate-style for only twice the mana -- and erase any opportunity he has to follow up. There is no test-spell nonsense and no second threat: if your Time Stop resolves, you get to untap and move along with your next sequence of plays.

Time Stop is also capable of stopping non-spell threats. Sometimes a control player will be way ahead in every aspect of the game, but because he doesn't have a Stifle, he loses to a card like Decree of Justice or Decree of Annihilation. With Time Stop, you can counter the Decree's cycle trigger AND deny the opponent the extra card he was supposed to draw! Not only did the opponent have to commit a ton of mana to his big effect, but when the turn ends prematurely, it is almost like you got a two-for-one on him. Time Stop will beat a Mindslaver activation like a Gilded Light and will prevent the massive effect of a Brain Freeze or Mind's Desire with storm on the stack. In some cases, Time Stop proves an effective counter because it serves a purpose few other cards can claim, in others, its

is actually cheaper than the threat the opponent was trying to play.

Possibly the most subtle aspect of Time Stop is its line "[r]emove all spells and abilities on the stack from the game." Time Stop can get a blue mage out of problems that typically slip by over long games. Darksteel Colossus on the stack? A Time Stop will prevent it from either resolving or being shuffled back into the opponent's library. Removing a Roar of the Wurm from the game the first time around means that you don't have to worry about its being played at a discount from the graveyard. Ditto on Hammer of Bogardan (and the many similar Phoenixes, Dragons, and so on).

Time Stop can answer the kinds of threats that, in the past, would wear down blue defensive measures. It serves as an additional defensive weapon that, while expensive, is more of a Last Word than Last Word. Expensive though it is, Time Stop can steal turns and reverse expectations when the opponent is most vulnerable. Though it really only does one thing, that it can be played in so many different ways makes this spell surprisingly versatile, if always dramatic.