ack in June I talked about Allies in Conflict. Today's article could have been called Enemies Really in Conflict—because if there are conflicts of value judgments between allied colors, the conflicts between enemy colors are even more dire. But that's old news. Green hates black. Blue hates red. The color wheel, and the flavor of the game as a whole, thrives on this tension. It's an automatic conflict-generator. We know this.

Instead I'm going to talk today about how enemies get along.

SPOILER ALERT: Kind of badly, it turns out. But in the most delicious way.

Magic's enemy colors aren't supposed to get along at all. But when I think of enemy color relationships, I like to think of the Chinese philosophy of yin and yang, specifically the taijitu symbol that represents two opposites melded together. In that symbol, a dot of yin swims inside the field of yang, and vice versa. The two opposites are different in almost every way, except for the fact that they contain within themselves an element of the other. They contrast, but in symmetrical ways. They're enemies, but they differ so completely that they fill up the universe between the two of them. 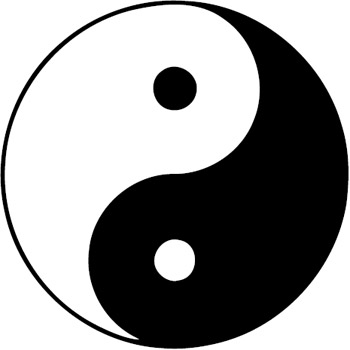 So it goes with the colors of Magic. Black mana is the potential for death magic, magic of endings. Green mana is the potential for life magic, magic of beginnings. They're perfect opposites—and yet they're meaningless in the absence of the other. There would be no need for birth if there were no death. And if there were no birth, there'd be nothing to die. Even in the purest expression of life, there is the implication of death.

Enemy colors need each other. They gain identity by contrast with one another. Green strives to promote growth and the flourishing of nature more because there are mages of death around, constantly and brutally slaying Gaea's children. Black redoubles its efforts to overpower and destroy all that life, because of all those flourishing threats streaming out of the forests. Through conflict with their opposites, they're led to express their own identities more. The colors, by hating their enemies, become more themselves.

So is it so incredible that the Golgari of Ravnica lash together the cycle of life into a single guild bent on eternal revivification of cell and tissue? Is it so surprising that black-green in Eventide brings us the trow, wild creatures of nature that nevertheless feast on death and decay? There's a dot of chaos in every ordered thought, a morsel of morality in every diabolical scheme. That interdependence is a seed that can bloom into cooperation—a sick, twisted sort of cooperation laden with strife and self-contradiction.

But that's not all that can drive enemies together. There's nothing enemies like more than a mutual enemy. But again, like everything having to do with enemy colors, even this doesn't go smoothly.

Allied colors have a clear enemy: their shared enemy. Green-white hates black because both green and white do. Blue-black hates green, and so on. 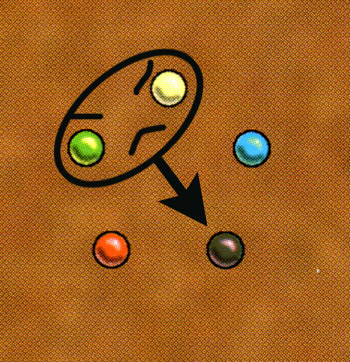 With enemy colors, it's not so easy. Who does green-black hate? Surely not red, because it's the ally of both those colors. If there were a point on the color wheel that was green-black's enemy, it would be somewhere right between white and blue. In fact, the nearest way we might describe the enemy of an enemy-color pair is the allied-color pair that the enemies flank. Blue-red hates green-white—blue loathes the mindless recklessness of green while red detests the orderly coercion of white. Blue-red together creates a kind of magic of wild inspiration, an individual mage's passion for knowledge streaked with traces of madness—which clearly gets along poorly with the green-white ideals of orderly growth for the good of the community. It's still strange to say this, because red has a lot in common with its green ally, and blue doesn't mind white's values that much. It's messy. It's bizarre. It's Eventide. 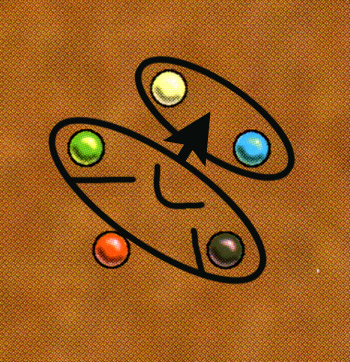 The blue-red noggles of Shadowmoor are a mischievous bunch, known to treat the entire plane as their own property. Their favorite theft target is the property of the elves, those green-white goody-goodies who think that they should control objects of beauty, and secret them away for the good of all. What sticks-in-the-mud. What gall.

On the other hand, the green-black trows, as ravenous scavengers, love feasting on the cast-off debris from the society of white-blue kithkin. The wide-eyed, paranoid kithkin huddle in their high-walled fortresses, tossing scraps over the walls. This practice attracts rats, and worse—and the trows provide the cleaning service that finishes the chain.

Looking at it this way, the noggles and trows have something in common: hatred of the color white. Enemy-color pairs don't tend to get along with one another, especially ones that don't share a color—but they do share a lack of white. If there were ever an alliance of elves and kithkin in Shadowmoor, you could expect to see noggles and trows (along with pucas, bogles, and treefolk) marching arm-in-arm, more or less, on the other side.

The Power of Extremes 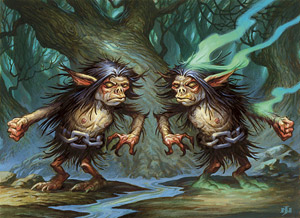 When you get two enemy colors together, the combination is extremely well-rounded. Combine white's authority with black's malice, and you get the destructive power of an Unmake or a Vindicate. Combine blue's wisdom and deceptiveness with green's wildness and brute force, and you get the explosion of cards and creatures seen on Spitting Image or Biomantic Mastery. Coming from opposite sides of the color wheel, the colors naturally balance each other's weaknesses and fill in the gaps. That's power.

But this power comes at a price. The combination is always uneasy. There's always internal conflict which, as a Vorthos and lover of good fiction, I'm passionate about. Stories are composed of scenes, and a good scene is like a little story in itself: it has a beginning, middle, and an end, and it has—you guessed it—conflict. Whenever a scene between two characters is lacking that sparkle that keeps the reader interested, the way you add life to it is to inject conflict. But here's the kicker—if there's already conflict between the characters, a great way to make it even more interesting is to force the conflicting parties to cooperate.

Green and black are mortal enemies—they have plenty of scenes in which they're arguing or all-out fighting. Great, that's status quo for Magic, no big show-stopper there. But now make them do something together. They're arguing about color philosophies while summoning a creature together, to stop an evil white-blue organization from winning the fight. In a sitcom setting, they'd be carrying a heavy couch up a flight of stairs. They can't leave the fight, or else they risk dropping the couch. They have to stay in the conflict, anchored together by the situation, so that the friction of conflict can keep the scene uncomfortable and off-kilter. That's the true magic of enemies—whether they're stuck together in the same scene or twined into the same mana symbol, they naturally generate a wealth of great stories.

I've got to cut it short now to make room for the stuff below. Stay tuned for an announcement, and the longest Letter of the Week answer I'll likely ever give.

Announcement: Get A Planeswalker’s Guide to Alara Signed at PAX! 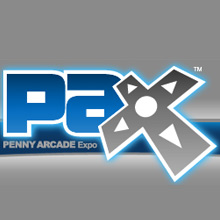 Note that the Planeswalker's Guide is hitting shelves over a full month before the Shards of Alara card set releases, so you'll be getting an amazing opportunity to explore the concept art, full-color finished card art, and gobs and gobs of Vorthosian flavor content about the setting, long before the cards are in your hands. This book is the realization of the creative team's dream to give you access to the same content that was used to develop the art, storyline, and flavor text for the set, so I'm extremely excited.

Jenna and I will also be happy to sign your copies of the Shadowmoor anthology, cards, web article printouts, pets, root vegetables, and any body parts that it's legal to expose in the state of Washington.

Come to PAX in Seattle, come to the Wizards of the Coast booth, and say hello!

Dear Doug Beyer,
I am a regular follower of your column, and I really enjoy the angles you give on the flavor of Magic. That being said, I was wondering if there would be a place in the future for a more in-depth study on "The Seer's Parables." The part in the "Explore Eventide" section was cute, but I was looking for something with more umpf. There seems like there would be an amazing backstory, but there is no text to go with it. I would be very interested in learning more about the Parables if there is time to write about them.
-Steven

The Seer's Parables is a real work, Steven, an original epic poem set in the eerie world of Shadowmoor. When we were putting together all the flavor text for Shadowmoor, I was excited about the setting's eerie vibe, and I wanted to unify the flavor text of all the Shadowmoor and Eventide quintuple-hybrid "demigods" with that same creepy-storybook vibe. So I asked creative text workhorse Rei Nakazawa to create something from which I could draw choice quotes. I was always impressed that the Love Song of Night and Day was an actual poem by Jenny Scott, and not just a collection of Mirage and Visions flavor text; I always envisioned that someday, when I was in charge, I would commission a real work like that for a set that I worked on, and then share it later on the web.

Well, I am in charge now, and so here it is.

The Seer's Parables take the form of a question-and-answer session between the speaker (a simple dweller of Shadowmoor, probably a kithkin) and the mysterious Seer. The speaker asks the Seer some of the most fundamental questions that all thinking beings want to know in life, and each time the Seer's answer comes in the form of a tale about one of the looming demigods of the plane.

Thanks for the request, Steven.