week we present the nominees for the first MTGO Community Award. In true award-show tradition, however, I'm going to make you wait a bit. First, a look back at last week's bug list and discussion of Fifth Dawn's (then) upcoming launch. I checked back in with Alan to see how the Fifth Dawn launch went from his end. He was pretty confident about seeing a lower level of bugs than with previous releases, and shared with me the three bugs that were found by Thursday. Two confirmed bugs are:

Unconfirmed is the following:

I also spoke with Alan about some questions that came up from last week's bug list. Three readers pointed out that the “fix” on Mourner's Shield seemed to be in the wrong direction – that was just a mix-up on our part. Mourner's Shield used to prevent only the next damage and now works properly, setting up a damage prevention shield until the end of the turn. Regarding Darksteel Colossus, all casting-cost related bugs are now fixed, e.g. Detonate now works properly.

Now back to the contest. I got a flood of nominations via email as well as several on the forums and it was definitely not easy to cut to just four finalists. People sent in tales of friendly behavior and fair trading, of tremendous amounts of time and energy spent building player-run rooms, of patiently answering questions and other ways of making MTGO a better place to spend our time.

Before we go on to the nominations, I'm going to mention some stories I was sent even though they weren't valid for the competition as they aren't about MTGO.

Rachael nominated her friend Michael, who inspired her (and others) with love of the game:

I've actually been playing Magic my whole life; I had an older brother who was really good but fell out of it when he went to college. But I had never had the drive to play Magic, I thought it was just me until I began playing with Michael. He has made it so I love the game. He has done this for more than just me, he has made others so inspired that we are all starting a Magic group. He doesn't stop there though. Mike also goes to little casual games at our local coin shop and helps younger kids at Magic. Michael has just made Magic fun for me and made me good. He told me where to go for help and let himself be help as well. He deserves recognition at least from me since I have taken so many of his cards.

I think most of us have a Michael from early in our Magic-playing days. Amanda's is named David:

I have a friend, David, that I think would be a great candidate for the cards. He's helped me learn magic and he doesn't help just me, he helps a whole lot of other people that are just starting in the game. I've seen him buy boxes at a time, and give out the rares to people that need them for nothing! So far he's given out 2 Chrome Mox foils, Arcbound Ravagers, Bringer of the Blue Dawn, Wrath of God and three Darksteel Colossus and a whole lot of cards I wouldn't give away just to help some new players out.

As a new father, this nomination meant a lot to me:

I purchased a few starters for (my son Phillipe) and on he went to learn Magic. He only knew a few people who played the game. He enjoyed the game so much in such a short time, it peaked my interest.

A month into it, he encouraged me to get involved. I gather he figured he would have the opportunity to play it more often if Daddy learned the game. He was right. I purchased one starter and a month later I launched myself into the game.

My son has been my mentor, friend, and primary trading partner since then. He's always been fair when trading with anyone. Whatever the age or knowledge he has always been just in trades and always willing to assist in building decks, strategy, combos etc.

At Magic: the Gathering gatherings (hehe), he would share any knowledge and advice with the kids and adults. Age has no boundaries and friendships are easily made.

We did stop a few years ago and my son convinced me (didn't take much) about six months ago to get back into Magic.

Well, there is no change in his willingness to help, give his opinion and he is of course always fair. Recently he introduced the game to some of his friends who are playing it regularly today.

It may sound like a promo for Magic; however it is the pride of a father who sees good character in a son who chose an ageless game that invariably is the best one on the market.

My most entertaining invalid (although MTGO) nomination came from Cody Watts:

When I first got my MTGO account, the coupon-delivering server was having problems, so although I received my account, I wouldn't have any cards for a few days. So I turned to the respectable past time of begging. I put up a notice in the trade room saying that I was new, without a coupon, and would take whatever they could spare.

For the most part, I got nothing. But one kind sir gave me the makings of an entire U/G threshold deck: 4 werebear, 4 wild mongrel, 4 springing tiger, 4 aether burst, 4 mental note, etc, etc. Although they were only a few commons, it allowed me to play until I got my coupon, and it was mildly competitive too. Sadly, I don't recall his name. It's one of the first few names on my buddy list, but damned if I know which one.

Perhaps he shall stand as the Unknown Soldier of MTGO.

And now the nominees. In each case I will provide a brief summary of why this person (or, as in one case, pair of people) was nominated. I encourage readers to lobby for those they feel worthy with personal testimony or explanations in the forum to this article. Naturally, I encourage everyone else to read the forums to learn more about these people who have helped make our community what it is. 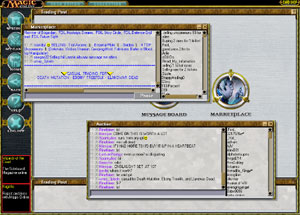 Twilight started /join auction, one of the most popular player-run rooms on MTGO, and a great resource. (See a brief discussion of the room here). He has also given away thousands of cards, including an effort to start /join free where players with overflowing collections could hook up newbies with extra commons and uncommons.

A tournament organizer in real life (see this article for some clues as to what “real life” might be), Deke regularly organizes player-run tournaments online. You can see a description of his most recent one here.

Although Gathion was one of those who nominated Twilight (and said, “Honestly, I don't see how anyone else can win this contest,”) more than one person felt that Gathion deserved a nomination for hosting the Survivor Magic series for almost two years. Hosted on Tuesday evenings at 6pm (type /join survivor), this merger of reality TV and Magic sees teams compete over several months, complete with contests, voting off, and a final champion.

Nushae maintains an MTGO web page (http://dragon.stack.nl/~nushae/mtgo/) that contains, among other things, Tobold's MTGO FAQ and Guide. It's a tremendous resource on which both have put in a lot of work. Check it out – you won't be disappointed.

These are just four of the over forty people that were nominated. My thanks to everyone who sent in a nomination, and especially to all those who caused others to nominate them by contributing to the MTGO community in so many ways. And now, the winner of the MTGO Community Award is up to your vote: