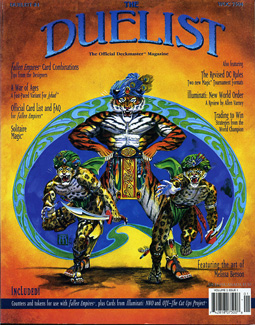 f you've played much with the Fallen Empires set, you'll have noticed that it has a lot of Counters and Tokens. Most people used glass beads or pocket change or dice, but there was an official option as well. Duelist #4 came with a cardboard sheet filled with two-sided punch-out tokens and counters!

Instead of just showing you the counters, we've decided to make a little game of this. Do you know what cards generated which tokens? Do you know when you'd need a Credit Counter or a +1/+2? Note that a couple of these (like the +2/+1 counter) have actually never been used by a card.

Just mouse over a token and a card that requires it will appear!