of the time, I like to march to my own beat. Well, “march” is a strong word; let's say “walk” instead. Or better, “lounge around.” But despite my customary rhythmic laziness, I sometimes take requests. An email from Zarak (who I'm guessing is either from Rhode Island or the Crab Nebula) starts like this:

I have been musing over this idea for a while. I wanted to create a wacky tribal deck with something not designed to be tribal.

I love Wurms, first of all, so you can guess where that led me.

Oh, right, Wurms. That's what I thought. Zarak then listed a Standard-legal Wurm deck that contained mana boosts (Llanowar Elves, Wild Growth), a whole bunch of Wurms, and just one "tribal" card (Tribal Unity). He then said that he just didn't know how to make it really tribal. 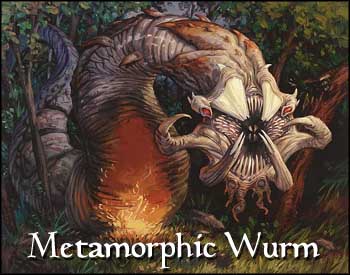 As the Wurm Turns

Zarak's quandary (and yes, I'm going to repeat his handle as much as possible) is a brand-new stumper that the Onslaught set gave to us wacky deckbuilders. It's a suddenly common roadblock that I suspect many readers of this column have crashed into over the last few months. The Onslaught set encourages tribal decks. We want to build tribal decks. But we don't want to follow the easy blueprint and put two scoops of Elves together with some hearty flakes of land and call it a deck. Our Johnny nature compels us to look for interesting, underappreciated creature types—but using them negates the tribal benefits. Most tribal effects are tied in to specific creature types: Cabal Archon says “Cleric” in its ability; Mobilization only helps Soldiers. There aren't that many generic tribal helpers, and they aren't that explosive. So doesn't a tribal deck that's missing the tribal benefits defeat the purpose of making a tribal deck in the first place?

Why not? Because a Wurm deck is cool! That's all the reason you need to build a deck in the first place. And once you're traveling down the I'm-gonna-build-a-Wurm-deck path, there are some tribal cards that can be sprinkled in to reward your creature type concentration. I took Zarak's deck and, to supplement his Tribal Unity, added a couple of copies of Steely Resolve (paying 8 mana for a Wurm just to see it bounced or killed is unacceptable) and some Tribal Forcemages. I love that card, and it's especially good here because it gives your super-sized wriggly friends trample. I also changed some of the mana acceleration methods. Playtesting convinced me that the quick boosts the Llanowar Elves and Wild Growths provide aren't as helpful in this deck as long-term fixes like Krosan Tusker and Vernal Bloom. I also added Rites of Spring because it fetches forests, thins your deck, helps you reach threshold for your Metamorphic Wurms, and dumps early Roars of the Wurm into your graveyard. The rest of the decklist, as well as the overall spirit of the deck, is pretty much unchanged from Zarak's original build. Here's what I wound up with.

Revenge of the Mealworms

3 Krosan Tusker 4 Roar of the Wurm

Steely Resolve isn't always worth it in your decks, especially if you ever want to target your own creatures. Note that nothing here—not even the size boosters—targets your Wurms. Vernal Bloom can backfire if your opponent has forests too; you have to be confident that you can take better advantage of the mana explosion than the person you're playing. The good news is that the Bloom makes Crush of Wurms castable! 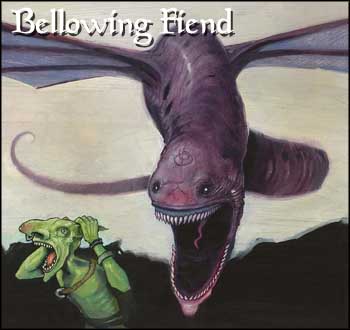 Naturally, I didn't want the Wurm deck to be all alone in this column, so here come decks built around some other neglected races. I eschewed (fun word—use it whenever possible) the major creature types in Onslaught block, of course, as well as the prominent Odyssey block clans. Barbarians, Minions, Squirrels . . . nah. Instead, I took a look at staple creature types that pop up in small numbers in lots of sets. They never have a starring role, but they're always very solid supporting players. First up are Spirits. (Maybe Zarak's “musing” comment got to me.) The Judgment Phantoms are a tight-knit Spirit family, but I've seen that deck plenty of times, and I didn't want to include three green decks this week. So I opted to pair white with black.

White's best generic tribal booster is Shared Triumph, while black's is Aphetto Dredging. (Patriarch's Bidding is good but needs a deck built around it.) The Dredgings don't interact well with Revenant, but they're very helpful in the aftermath of Kirtar's Wrath (which, remember, can leave you with Spirit tokens). A deck theme that I touch on but you can explore further if you like is the interaction between Spirit Cairn, which can make Spirits when anyone discards a card, and black discard spells like Chain of Smog. The Cairn teams up with cycling cards as well. Another bonus of a Spirit theme deck is the inclusion of cards that are thematically spiritual, like Spirit Link and Inspirit.

The Funeral Pyre is for use on your own graveyard, but it can work to remove a nasty Incarnation or flashback spell in a pinch. And Bellowing Fiend is possibly my favorite piece of Seventh Edition art. 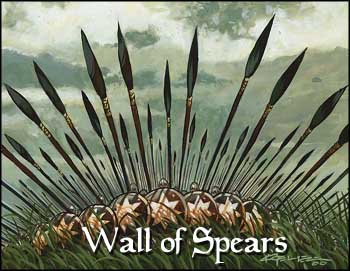 The Wall deck. I'm including it here more out of obligation than anything else. It's not new, and it's not (by this point) innovative. But it is still interesting, and it has some new tricks. Plus, besides being a deckbuilder, I provide a public education service (or at least that's what my tax return says), and the Wall deck is relevant to this column.

Walls can't attack. That's what they all say, and that huge drawback is how Walls can get away with being so cheap for their size. Wall of Swords is a 3/5 flying creature for

. Sunweb is a 5/6 flying creature for

! Sure, it can't attack, and it sometimes can't even block, but there are ways to send it into battle. One way is Rolling Stones. The Wall tribal card, it simply lets Walls attack. But I find something unsettling in that. Playing it feels skeevy, like winning the bakeoff with a store-bought cake. Trust me, your conscience haunts you after a thing like that.

Some Walls can attack by themselves. Wall of Wonder was the first to do so way back in the Legends set, and it's in the Seventh Edition set. I didn't include it because it's too expensive and too fragile; better Walls have learned its trick. Crude Rampart can attack until it's turned face up. Wall of Deceit takes that a step further by flipping itself back down. And Mirror Wall can just get up and walk into battle. But there's another way to send Walls to war—a tribal way. An antitribal way, really, since by stripping a Wall of its Wallness, it loses its immobility. Imagecrafter plus Sunweb equals cheap 5/6 flying Phelddagrif (or Mongoose or whatever other creature type you choose) beats. Standardize does the same thing in this deck that Rolling Stones does except that it's got a tougher mana cost, only lasts a single turn, and gets you ten times as many style points. Walls. They're not just for defense anymore.

For those of you who were thinking of submitting something like this for my Rock & Roll Deck Challenge as either a Rolling Stones entry or a Pink Floyd's The Wall entry, I know you can do better. 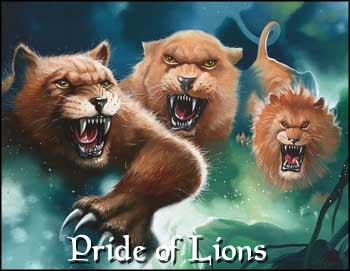 I'm a cat person. My two fat, semipsychotic felines Mulder and Scully (news flash: I'm a dork!) can attest to that. So a Cat deck seems only natural. I know it's been done before. Cats have been prowling around casual Magic get-togethers for ages. Del Laugel played a Cat deck in the Tribal Wars portion of the Wizards Invitational. (link?) But I wanna play too, and the beauty of having my very own Internet column is that I get to do whatever I want! As long as what I want is a casual Magic deck, that is.

I went with a red-green build, and the generic tribal cards I use are Tribal Unity, Tribal Forcemage (something about those two suggested they'd be good in tribal decks), and Crown of Fury. While the Forcemage was great earlier because it gives trample to all your Wurms, it's great here because it gives +2/+2 to all your Cats. The Wurm deck lends itself to having a few large Wurms on the table, while the Cat deck is more likely to have a number of small Cats. The more Cats there are, the more of a total bonus that +2/+2 gets you. The Forcemage makes a great combo with Firecat Blitz, as does Crown of Fury. Instead of making a litter of 1/1 creatures, make a litter of 2/1 first strikers. It's a Sabretooth Tiger Blitz! (In the interests of full disclosure, I feel it's necessary to reveal that the Seventh Edition Sabretooth Tiger sports one of the first pieces of flavor text I ever wrote. And it still makes me laugh.) Crown of Fury makes a nice combo with the provoking Krosan Vorine too. I love decks where any two pieces click together nicely. Rampant Growths and Explosive Vegetations let you power out your bigger Cats earlier, fuel up large Blitzes, and make sure your Uktabi Wildcats are as fat as Mulder. Synergy, synergy, synergy.

I bet that some of you readers have Internet access (wait for that to sink in) and may enjoy playing Magic Online. While this week's decks weren't designed with the Tribal Wars format in mind, they can raise quite a ruckus there. The Wurm and Spirit decks would each need to bring the creature count up to 20 to be legal, while the Wall and Cat decks fit the format as is. Adding Invasion block to the card pool gives you access to options such as Penumbra Wurm, March of Souls, the sometimes mobile Prison Barricade, and Penumbra Bobcat. You might also want to tighten the defensive focus of these decks since you know you'll be facing off against another creature deck (or a cycling Beast combo deck).

Until next week, have fun with wacky tribes.

Mark may be reached at houseofcardsmail@yahoo.com. Please send any Magic rules questions to ask@wizards.com.