Fate is in the Cards 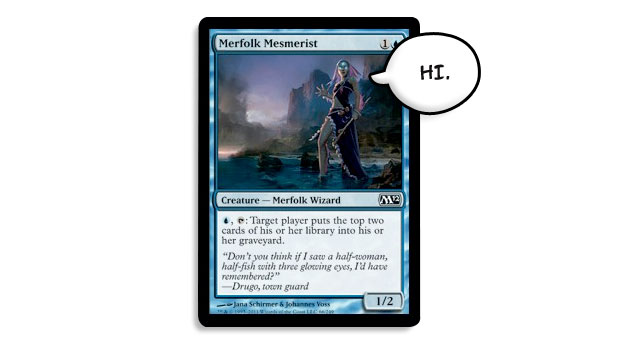 Most of you out there view Magic from a player's point of view. I can't really blame you for that, I suppose. For Fate Week though, I thought I would bring you into my world and show you around.

For all of the luck-related complaining I receive about mana problems, opposing topdecks, and drafts gone awry, I figure it's only fair for you to take a look at it from my perspective for once. It's a tough life out there for a card. Hopefully, after this session, you'll be able to cut us a little slack and see some ways you can help bend the fickle finger of fate to your whim.

Every Deck Has Its Fate

I'll kick this off as best I can: I'm sorry. I've been there every time you were stuck with the wrong number of lands. I've seen your head shake as you pluck spell after spell off the top of your library, like a prospector sifting pans for gold and coming up empty. I've also watched your face break into a frustrated grimace when it seems like your deck becomes a real-estate agent in the very next game. 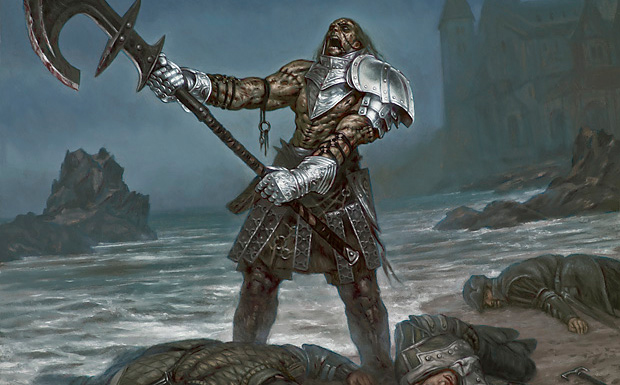 Fate's cage is difficult to escape. Once you shuffle us up, you're confined to the fate of the order in which we rest in your library.

But there is a way to help defy this fate. Much more than just shuffling is a factor here; it goes both ways. While you can't escape the randomness of shuffling, there are ways to help mitigate it via careful deck building.

Booster Draft and Sealed, having a large deck-building component at their core, are great examples of this. A lot of players keep their mana calculation for Draft or Sealed simple: twenty-three spells, plus a mix of seventeen lands. Often, some other basic lessons—like cutting lands when you have multiple cheap ways to draw cards or spells like Traveler's Amulet—get factored in as well. However, something talked about far less is modifying your lands based on the strength of your deck.

When you draft a strong deck, especially one with incredible synergies or several strong rares, often one of the primary ways you can lose is having mana trouble. Missing land drops can allow an opponent to quickly overtake you while a card like Sorin, Lord of Innistrad rots in your hand.

When you have several cards that are significantly better than what the opponent can probably draw, it is okay if you get a little mana flooded by playing more lands, since your card quality makes up for it. All you have to do is hit your land drops and cast spells and you will be in good shape. 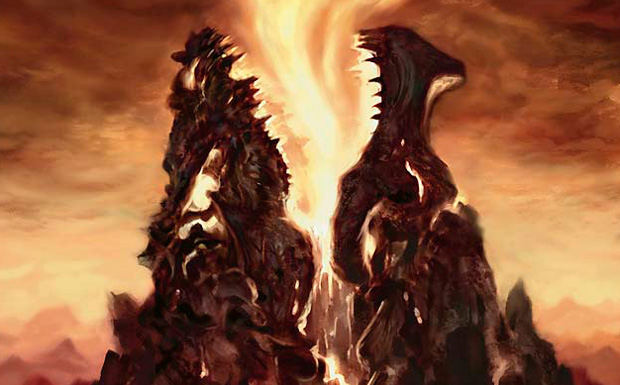 The opposite is also true. If you feel your deck is particularly weak, you might need to get a little luckier than normal to win. Try and push fate in your favor. Sure, playing sixteen lands is a risk, but if you weren't going to have a good enough deck to beat other people in the first place then you should try to fit in that extra spell. It will mean you draw spells just slightly more often, helping mitigate weak card quality.

This line of thinking isn't just for Limited either. Several powerful Constructed decks have a utility land in their sideboards to bring in when they feel advantaged and just don't want to run afoul of mana trouble. Similarly, several pro players will sideboard out a land when the matchup feels unfavorable because they know they have to get a little luckier to win.

Some of the most frustrating Commander games are caused by mana shortage, and even with the free mulligan it still comes up a little too often. Because the average Commander deck has such a high mana curve and the decks are full of lands with activated abilities, combined with the fact that there is seldom significant early game pressure, there's usually little reason to not fill your deck with all kinds of juicy lands.

Manlands like Creeping Tar Pit and cycling lands like Barren Moor can help you out, both by letting you hit your land drops and by being more versatile when necessary. A lot of Commander decks have land counts in the low forties, but with such a wide card pool, often Commander decks play best with closer to fifty lands!

Mull Over Your Fate

When you see seven of us in your hand, a mixture of lands and spells, often it can be tempting to keep it. I can't blame you either—every card likes being in an opening hand. It makes us feel special. However, we also like to contribute to a win, and when us being in your opening hand contributes to you losing it makes for a big blow to our ego.

The easiest way to help avoid an ill fate is to take a mulligan. That's what the mulligan rule is there for, after all!

The truth is—as much as we don't like to admit it—simply a good mixture of lands and spells isn't enough. A hand has to have a plan. 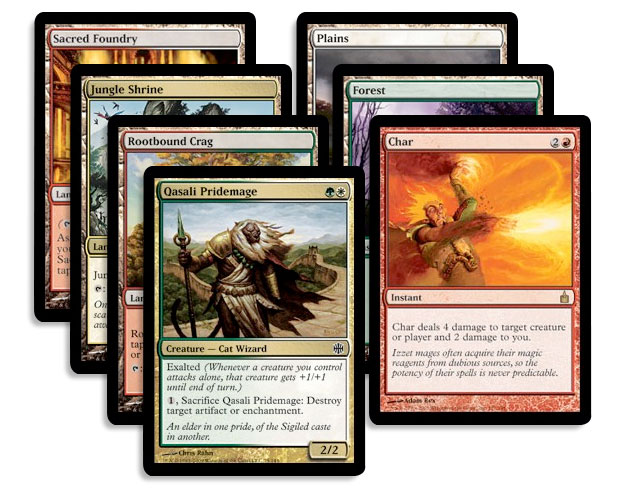 What is this hand accomplishing? Sure, you can play your two-drop and then back it up with a removal spell—you have lands and cards you can cast—but this hand doesn't really go anywhere. If you draw just a couple more lands you're going to be in big mana-flood trouble, and there's no telling what spells you'll draw in which order.

Make no mistake about it: we love being drafted. Each of us only gets to be a part of one Booster Draft ever, and we cherish that moment. Fortunately, we keep pretty good track of when we're taken so we can talk about our draft afterward. It's a popular topic for Magic cards, and the question of "When were you taken?" carries significant social status.

What we cards have noticed after reviewing so many drafts is just how much every pick matters. Although the process of a draft doesn't take more than a half hour, the decision trees it creates are mind boggling.

A lot of people will mutter under their breath about how a draft went poorly or that the booster packs didn't have any good cards for them. Most of the time, though, there's much more to it than simply the good cards running dry. No format emphasizes control over fate as much as Booster Draft. 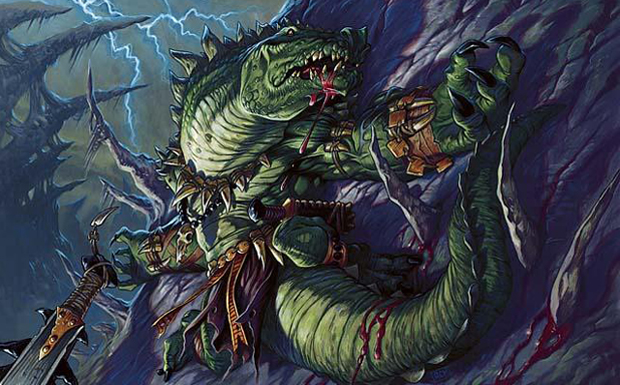 Every time you sit down to draft, you are presented with a multitude of fate-altering options. You will shape the fate of people around you and, ultimately, yourself. Which card you take first can entirely decide one of your colors. Moreover, the cards you don't take deeply affect the people to the left of you by signaling which colors aren't being taken, likely deciding their colors in the process.

Most importantly, out of all of this is not being afraid to change your destiny. It's easy to feel resigned to your fate and locked in on a color combination when a strong off-color card comes seventh pick. You just pass it along, taking a mediocre card in your colors instead, waiting to find a card your deck really wants.

In reality, maybe that is the card your deck really wants.

You can create fire out of a spark with little effort. Spending a late pick on a strong card is only a small price, but the potential reward is huge! If that color keeps flowing, you can pick up several late goodies and alter your fate entirely.

Never feel like your fate is out of your hands in Booster Draft. Be on the lookout to control your own destiny.

All's Fate in Love and War

Just because we're randomly determined doesn't mean your games have to be.

Trust me, we want you to win. We're cheering for you at all times. But it's up to you to win the game. Manage us effectively. Know when to put us in or take us out, when to pick us high or pass us along.

If you lose, it's okay if you want to give us some of the blame sometimes. Our cardboard skin is thicker than it looks. We can handle it. But by the same token, it's not always our fault. Sometimes, you put in the wrong number of lands, sideboard poorly, make a suboptimal draft pick, or just accidentally don't mulligan a hand with seven lands. That's not entirely on us.

Now if you'll excuse me, I have a game to get to. Is it yours? 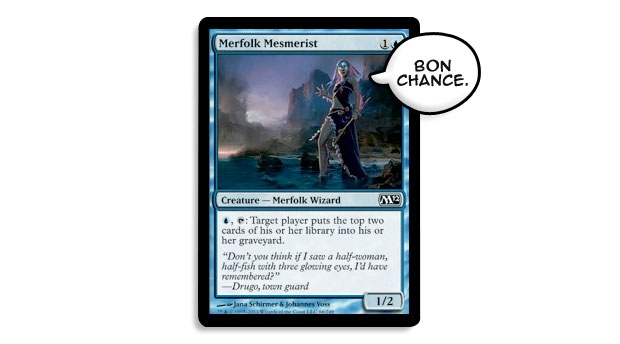 Until fate brings us together again,